From the Art Collection

The Brisbane Girls Grammar School ceramics collection, which is part of our substantial fine arts collection, was initiated by former Principal, Dr Judith Hancock. Dr Hancock generously added to the collection, donating a platter designed by one of Australia’s finest and most senior potters, Mr Milton Moon AM. Mr Moon who recently died at the age of 93, was a foundation recipient of the Winston Churchill Fellowship in Queensland, receiving his Fellowship in 1966 to study ceramics in Iran, Italy, United Kingdom, France, Spain, Sweden, Denmark, Finland, and the United States of America.

In 1974, he lived and studied in Japan as a Myer Foundation Geijutsu Fellow and throughout his life was the recipient of many prestigious awards, including a Member of the Order of Australia in the 1984 Queen’s Birthday Honours.

Moon was also a lecturer in art at a number of tertiary institutions. He drew much of his inspiration from the landscapes of Australia, in particular the history and art of the first custodians of this land. For many years he resided in the Adelaide hills and was fascinated by the Aboriginal stories about Wilpena Pound as a sacred site. Consequently, Moon did a number of works that he called the Wilpena series. While the dot-type decoration may owe something to Aboriginal design, it was never Moon’s intention to misappropriate this design motif.

Moon explained that he remained ‘concerned, if a little obsessed, with the challenge of making pots, which although belonging to a ceramic tradition of some 8000 years or more, are undeniably and uniquely Australian. With all my changes of expression this has remained constant.’ 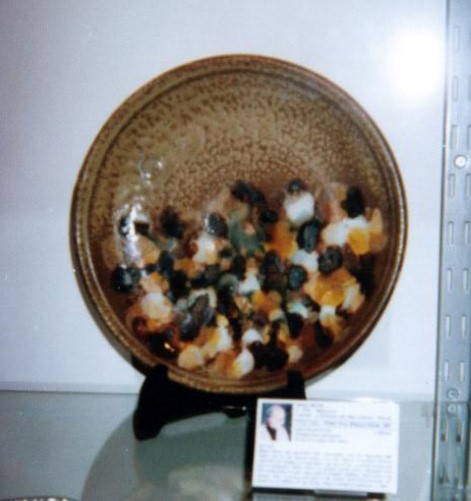 Giving the gift of hope