Bombay to Brisbane–underwear or outerwear

Love them or laugh at them, the Grammar bloomers meant the athletic student could joyously enter the fray of competition knowing she was well covered and feats of athletic prowess would not be compromised! Although we do not have a pair of 1920s original bloomers in the School archive, we do have replicas that bring to life the look and feel of this fascinating piece of—what is now in a different format—still essential clothing. 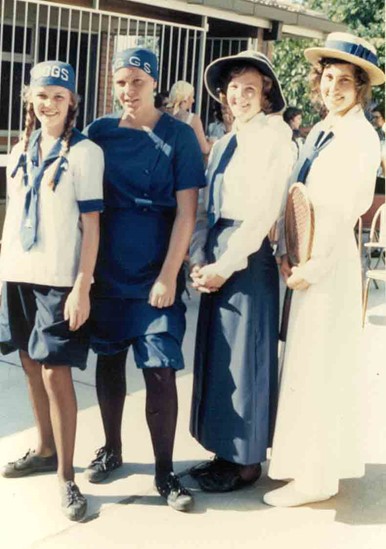 Although the advent of the bicycle and Amelia Bloomer have been credited with providing freedom and comfort for active women, it was schoolgirls’ clothing that anticipated the need for such attire, and educators were the real innovators of rational dress for female physical activity. Lady Principals of Girls Grammar supported the concept of kalos kagathos—a strong mind in a strong body—and thus purposeful promotion of physical activity occurred from the first year of the School’s establishment.

Bloomers were worn by schoolgirls, under dresses, when they were performing physical activities in the gymnasium and on the court from the late 19th century. As the length of the dress over the bloomers became shorter and shorter, in the early 20th century the dress was discarded and the bloomers were revealed in all their glory. (Note the Grammar girl with interlocked arms in the pyramid below, front right, sporting a very dashing pinafore over her bloomers.) 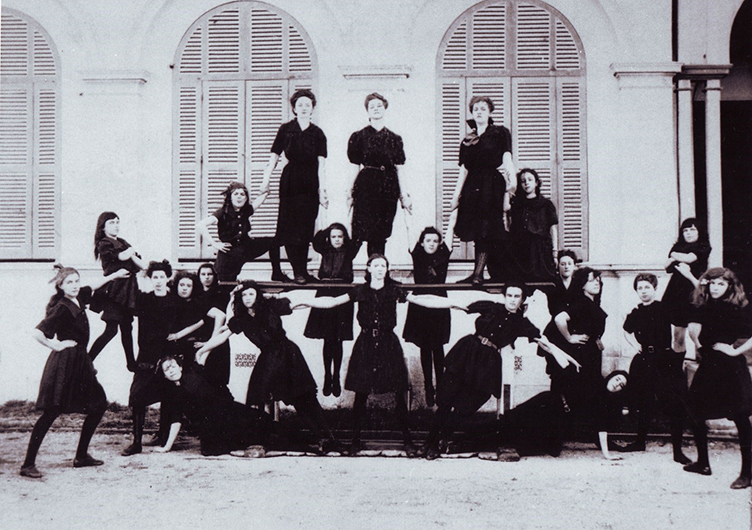 1906: Display pyramid with Kathleen Lilley standing in the back row first on the left

Decorum still played its part in this early adaptation of athletic attire where the bloomers, with their copious metres (or ‘yards’ in the terminology of the time) of cotton material, were accompanied by black stockings held up with garters. Post 1913, the ‘sailor middy blouse’ with a ubiquitous tie proved popular with Grammar girl athletes. 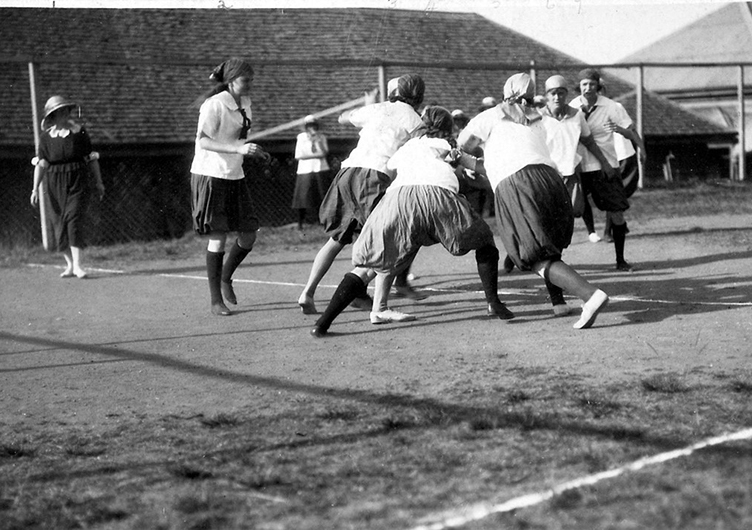 The voluminous bloomers were de rigeur for all athletic performances which included Netball (then called Basketball), Athletics, including hurdles, ball games, and drill display work. They had either a buttoned or elastised waistband and were drawn into the knee with more elastic. There was ample room for individual interpretation with the more risqué hitching the bloomers above the knees and rolling the stockings down. There is also photographic evidence of even more revolutionary Grammar girls with bare legs! 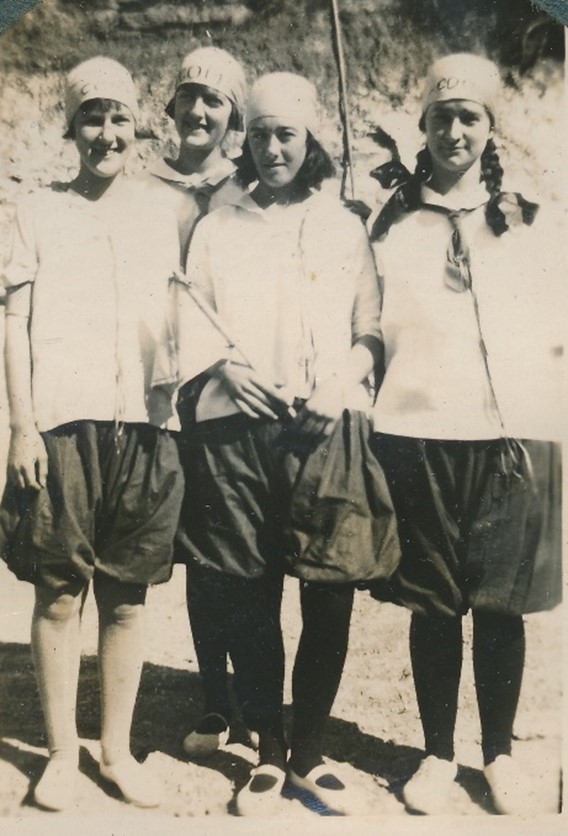 1937 was the final year Grammar girls competed at Interschool Athletics in bloomers and a blouse. The newly designed sports uniform saw a reduction in the amount of material in the bloomers with a tunic replacing the sailor top. The argument was that the amount of material in the bloomers hampered the more adventurous athlete and, if the material were to be reduced, another layer was needed for modesty. Thus began the era of the shorter, tighter bloomer worn under a three-box-pleated gym tunic.

In 1954, a waisted gym tunic was introduced, and the bloomers needed to be tighter and shorter as the tunic was much more fitted. Still elastised at the waist and the legs, these garments allowed the athlete to be comfortable in any position. This style of bloomer was still required into the 1970s after the A-line tunic was introduced in the late 1960s. The advantage of this style of bloomer was that they allowed for the athlete to tuck their gym tunics up out of the way in the heat of competition. 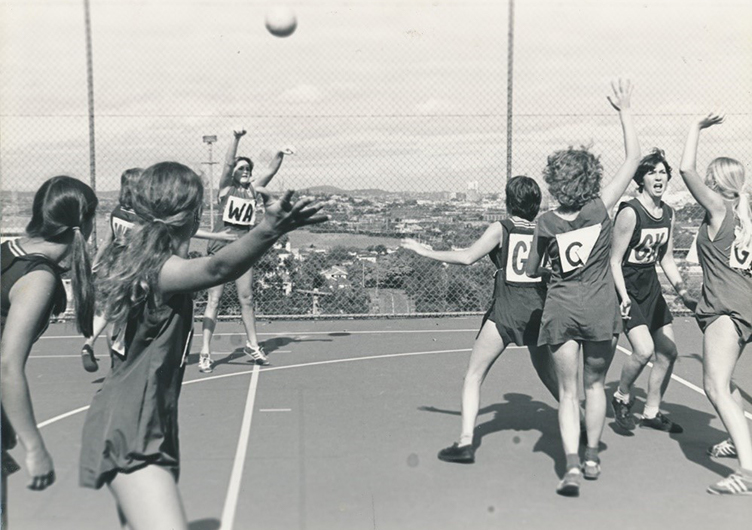 The modernisation of Grammar girls’ sports wear continued in the 1980s when the skirt and Physical Education top were introduced. The concept was that the skirt could be removed for classroom gymnastics and the increasing popularity of Basketball. The full bloomer was too bulky for these skirts and the bloomer became the ‘bummer’: tight elastine and cotton pants.

Not everyone was comfortable in these briefs and the ‘scoop’ Grammar shorts were introduced. Many girls preferred the freedom of shorts, as well as the protection they afforded under a gym tunic. Thus, the shorts became the next bloomer iteration and proved exceedingly popular. 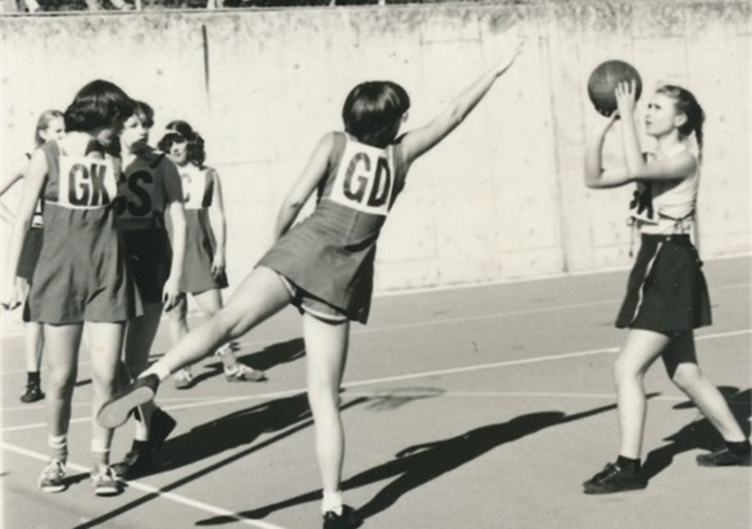 1980: Jessica Axelsen defends the shot in gym tunic and shorts

Fashion, as well as functionality, dictates appropriate and acceptable sportswear, and the Grammar uniform is no different. With the popularity of aerobics and the ubiquitous lycra, in the 80s and 90s, cycle pants were introduced to the Grammar Clothing Shop and was often the garment of choice—worn independently or under the wide range of HPE and sport uniforms. 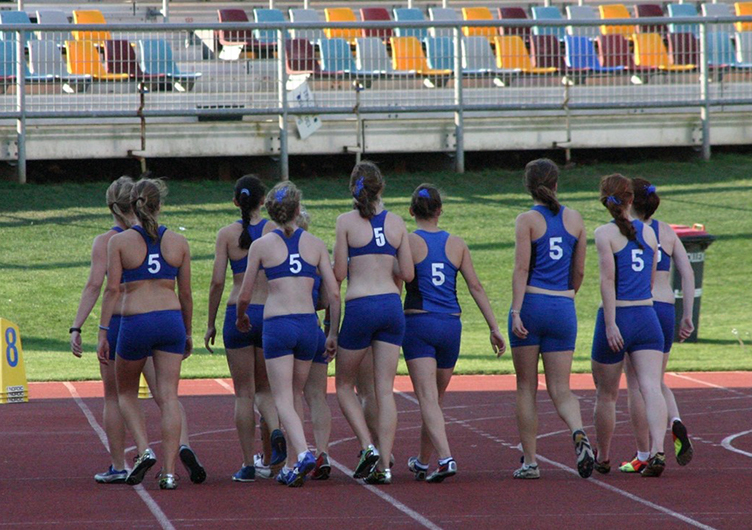 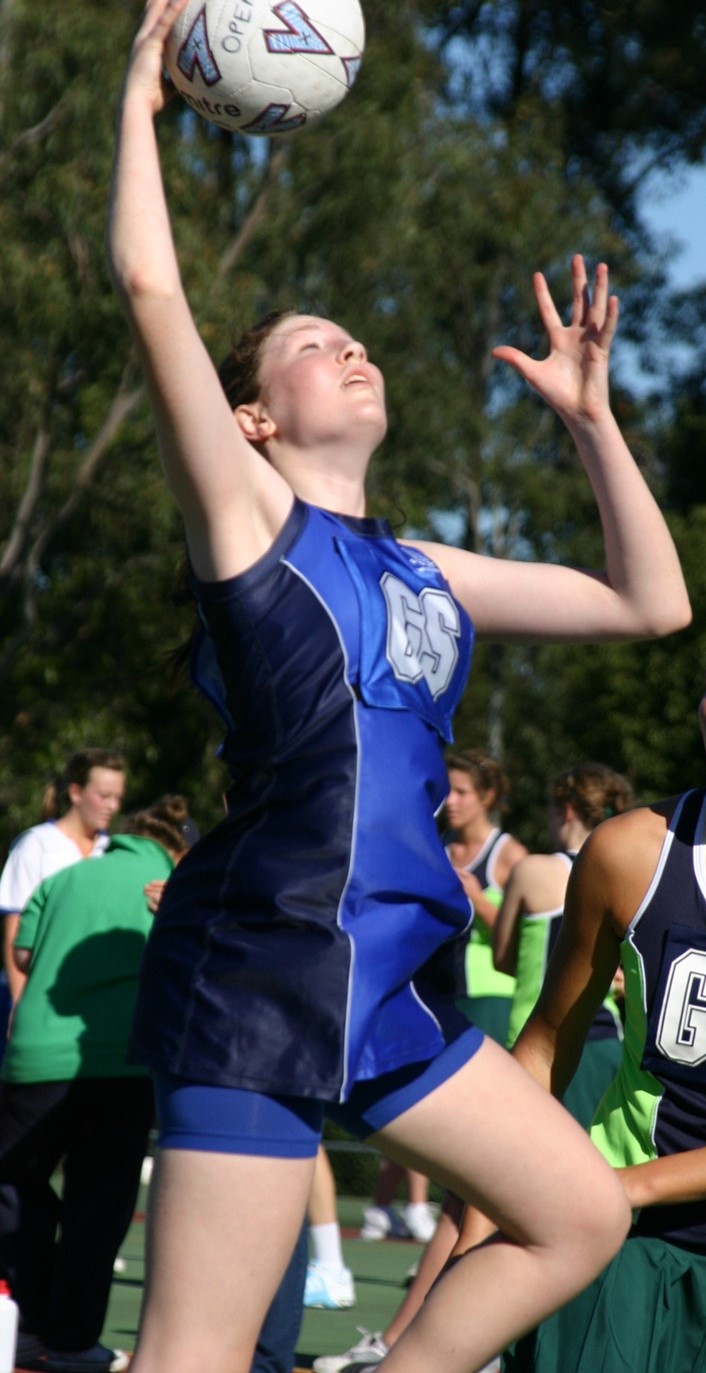 2006: Michelle Geddes with cycle pants under the Open Netball dress

Whether it was wearing yards of bloomer cotton or figure-hugging lycra, Grammar girls have always relished the challenge of competition and physical activity. The introduction of bloomers enhanced and supported the Girls Grammar teachers’ philosophy of a liberal, broad-based education from the very beginnings of the School. The object was always to facilitate exercise, sport, and physical pursuits carried out in the most enthusiastic and energetic way possible! But modern Grammar girls must also admire the tenacity of those early athletes for performing with such tenacity in stockings, garters, blouses, ties, and those bloomers! 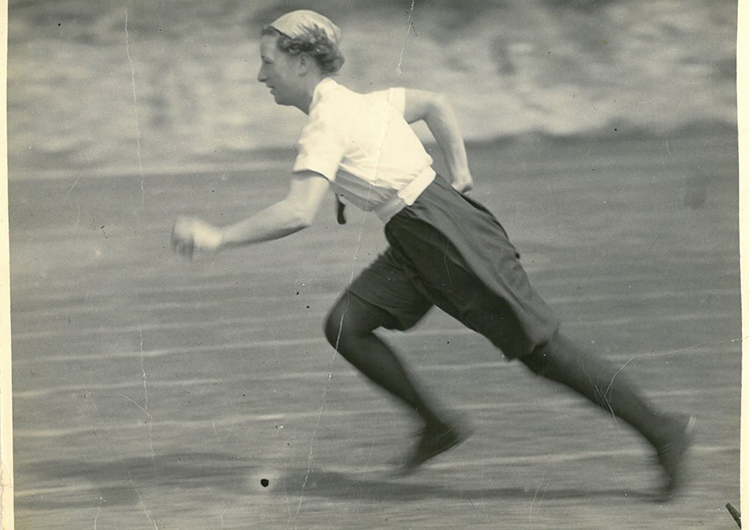 [1] Bombay bloomers was the nickname used to describe the army issued khaki shorts created in the 1930s and worn by the British army in tropical areas such as India, Burma, and Malaysia. They were made during WWII in Australia and issued to Australian forces to wear in the heat and as protection from mosquitos carrying malaria. This nickname was frequently used by the seamstresses in the factories who made them.