Although the building is still covered in scaffolding, the Science Learning Centre is taking on a more complete structure and shape.

In Week 9, the SLC Student Access Group toured the site, gaining a rare chance to see the interior of the building while electrical facilities, plasterboard and internal finishings are being completed.

Entering on Level 2, the group walked through the large multi-function space, and could view the concrete structures designed to imitate the clouds and gases in the ‘atmosphere’ layer of the building. The group were fortunate enough to observe many of the internal features of the building before various facades and finishes cover them. Moving up to Level 3, the group entered the classroom areas that overlook the multi-function space, before continuing up to Level 4 and viewing the bottom of the central void. Students were able to gain an understanding of how the void, in conjunction with newly installed louvered windows, will allow the building temperature to be regulated without relying on air-conditioning. Another feature of this floor, the group observed, was the structure and form of the concrete floor where the building connects with E Block. Open to the weather, it allows water to run below the floor in inclement conditions, to keep the internal environment dry.

At the conclusion of the tour, the group went up to the roof, where they were able to look down through the central void to the lower levels. Students saw the crane being prepared for the installation of the coloured glass and feature panels that will cover the exterior of the building.

SLC Construction Manager and BGGS alumna, Ms Cherise Czislowski (De Vere, 2002), led the tour and showed students a range of new developments since the group last visited the site during Term 1. She explained that the pace of change would be increasing in the coming months as many suppliers come onsite to complete finishing works on the building. There is much anticipation and excitement within the group as they look forward to their next site visit in July. 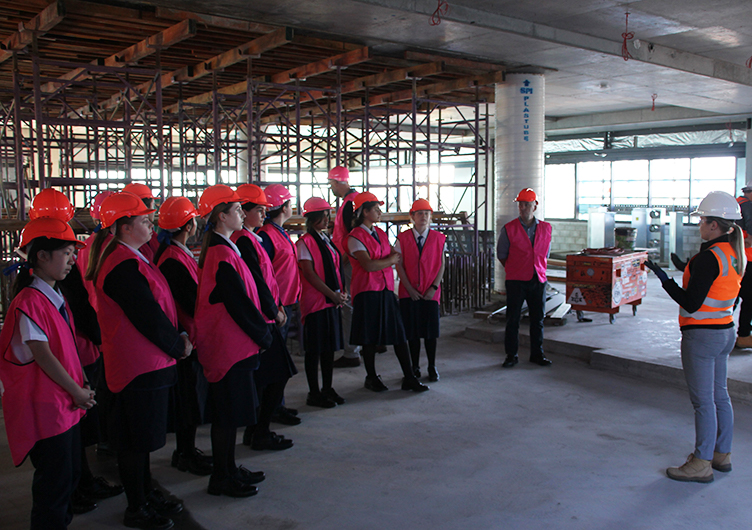 An Exciting Next Stage in Science Education

A new space to play at BGGS