Girls Grammar is in the middle of a very exciting fortnight of Debating and Mooting, with many of the School’s teams experiencing success in their individual competitions. Last Wednesday night, three Girls Grammar teams won their semi-final debates earning them a place in the Queensland Debating Grand Finals at Somerville House this week.

After an hour of intense debating, the 8.2 team and the 11.1 team were runners-up to St Joseph’s Gregory Terrace and All Hallows’ School respectively, each from a split decision from three adjudicators.

The 12.1 affirmative team won their debate with a unanimous decision after an hour and a half debating ‘that we should ban ‘true crime’ media’.

For the second year in a row, Girls Grammar was awarded the Champion Schools Trophy for our accumulated efforts spanning all teams competing in the six-week, six-debate Finals Series. This award reflects a magnificent effort from our hard-working debaters and their equally hard-working coaches.

Last Saturday and Sunday, after three months of intense work, Caitlin Brittain (10M), Mia Combis (10R), Abigail King (10R), Nina Obermair (10M), Lata Warner (10R) and Zhixuan Zhang (10L) competed in the Queensland University of Technology (QUT) Law School Mooting competition. The girls were the only Year 10 students in a starting field of 14 Year 11 and 12 teams. Congratulations to Team 9 (Abigail, Caitlin and Mia) on placing second and securing a place in the grand final, which will be held at the Banco Court in the Queensland Supreme Court this weekend.

In just over three weeks’ time, Jillian Campbell (10O), Abigail King (10R), Trish Le (10R), Sierra Reza (10H), Tiarne Graves (11L), Abbey Grice (11E), Saee Sane (11O) and Lara Triscott (11H) will travel to Melbourne for the Australian Individual Debating and Public Speaking Championship competition. The top ten competitors selected for the Australian team from this competition will then travel to Shanghai next Easter to compete in the World Championship. We wish these girls the best of luck. 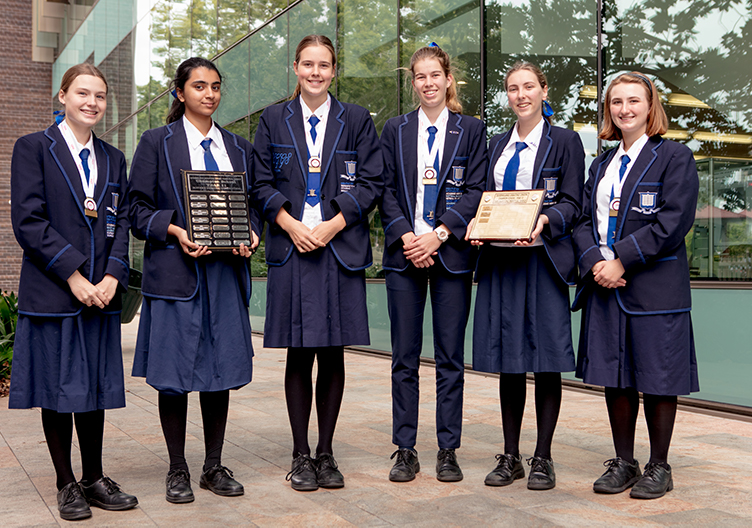