The Debating season is now in full swing with the final week of the first round of the Queensland Debating Union (QDU) competition held this week. The Brisbane Girls Debating Association (BGDA) competition is now entering its third round this term with 40 teams of debaters from 12 girls’ schools meeting every second Monday afternoon here at BGGS.

For the past four weeks our senior debaters have been competing every weekend for a place in the Queensland Schools Debating Team. The number of candidates has progressively reduced from 150 to the Final Twelve squad. This group of debaters will now train intensively for three weeks and then compete in a Finals Night event to determine the membership of the 2021 State Team. Girls Grammar has a particular interest in this year’s competition because our Debating Captain, Wijdan Rahim (12G), is one of the hardworking Final Twelve debaters. We wish her all the best over the next few weeks. Further details of the Finals Night will be available with the next week for those who may wish to attend and offer her our support.

To celebrate International Women’s Day in a manner relevant for debaters, the BGDA hosted a short function after the evening debates last Monday. The event opened with a keynote address from Lauren Ringrose, a past BGDA Executive member and long-term BGGS coach. As well as holding a very impressive debating career spanning school, state and Australian university representation at World Championships, Lauren graduated with a dual Engineering and Math degree,  and now works as a Data Scientist, employed by Thiess Constructions as a manager of Data Analytics for Heavy Mining Equipment across Australia and South East Asia.

She spoke about how she is finding an authentic space as a young woman in a highly male-dominated field. Lauren linked her progress in this endeavour to the confidence and skills she acquired though many years of debating. Her speech was followed by a short demonstration debate by the very accomplished debaters on the current BGDA Executive, one of whom is Bella Busby (2016), who is the current BGGS 11.1 Coach. The evening was well received by both current debating students and accompanying parents.

We look forward to further initiatives by the BGDA, and to sharing the development and successes of BGGS debaters. 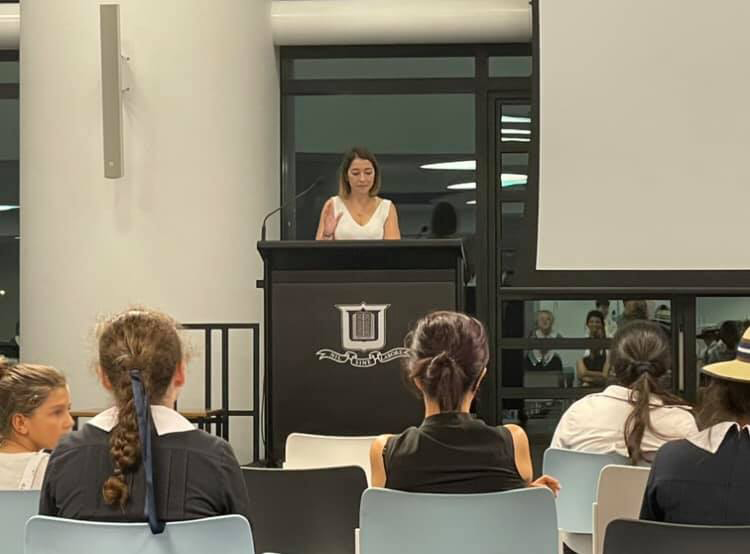