AHEP provides an opportunity for Australia-wide secondary school wind, brass, percussion, string, and voice students to work in an intensive environment of musical excellence with their peers, under the leadership of a team of internationally eminent Australian conductors.

Each year, schools are asked to nominate their most outstanding young musicians for possible inclusion in the program. There are very high standards of entry, and this year, the following students have been accepted into the AHEP program:

We are very proud of the girls’ achievements and look forward to hearing about their participation in their respective programs.

On Monday night, Bella Cheng (9B) attended the AMEB QLD Annual Diploma Concert and Awards presentation for 2022. This ceremony honoured the incredible achievement of students across the state who had been awarded a diploma for their music studies. The hundreds of hours of meticulous practice that go into preparing for such an exam is an enormous undertaking. It takes an especially diligent student to balance this effort with the demands of school life. We send our most hearty congratulations to Bella for this outstanding achievement and congratulate her for achieving her Associate of Music on the cello. 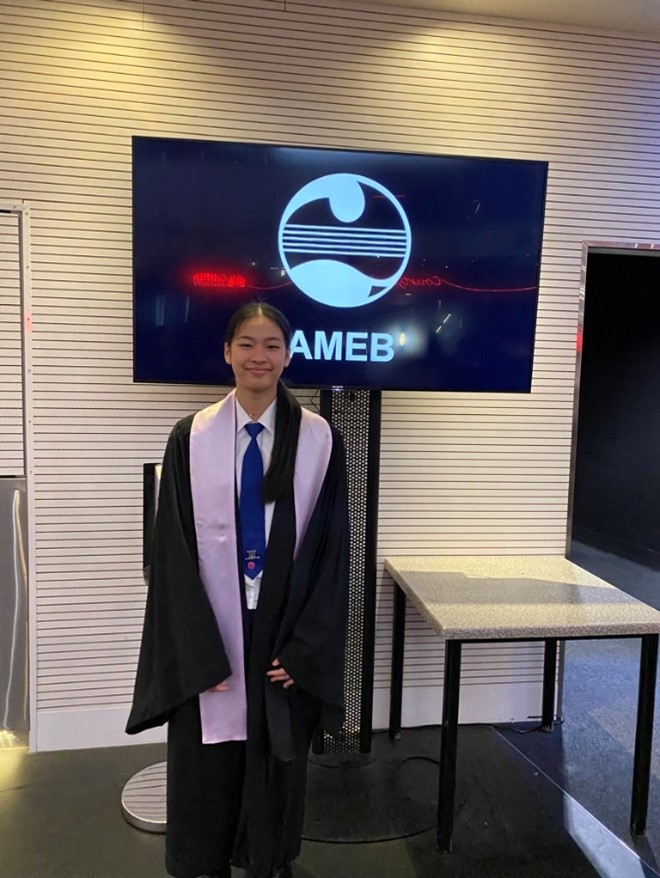 Bella Cheng (9B) at the AMEB QLD Diploma awards ceremony

Grammar Singers made their 2022 debut performance at Brisbane Grammar School’s ‘Community in Concert’ last Saturday evening at the Queensland Conservatorium of Music.

The theme of the event, Cinematic, allowed for a diverse and enjoyable program including the Symphonic Band opening the event with the 20th Century Fox Theme, music from Disney films—The Incredibles, Raya, The Last Dragon and Toy Story—contrasted with the Symphony Orchestra playing the Empire Strikes Back and the BGS Community Choir singing movements from Mozart’s Requiem—Dies Irae and Lacrimosa.

The Grammar Singers opened with a moving performance of Ave Maria Guarani from The Mission, the music that composer Ennio Morricone won the Academy Award for Best Original Score in 1986.  This was followed by a colourful and lively medley from West Side Story, by Leonard Bernstein and Stephen Sondheim, including the well-known songs Tonight, I Feel Pretty, Maria, and America, the enjoyment of which reflected in the ensemble’s presentation.

Grammar Singers joined the BGS Community Choir and ensembles to finish with You Will Be Found from Dear Evan Hansen. This uplifting finale featured our very own Year 12 student, Scarlett McLennan (12H), who sang a beautiful and touching solo alongside her Grammar Singer colleague, Alden Sommerfeld.

The concert was certainly a celebration after the many cancellations of events over the past few years. Spirits were lifted and the special collaboration between the girls and boys in Grammar Singers is deeply valued.

Grammar Singers following their performance at Community in Concert

On Saturday 11 June, Queensland Youth Orchestras will be holding an Open Day at the historic Old Museum from 11 am to 6 pm.

We are excited to share this event, which is already shaping up to be a fantastic day filled with live music, tours, and even a sausage sizzle! 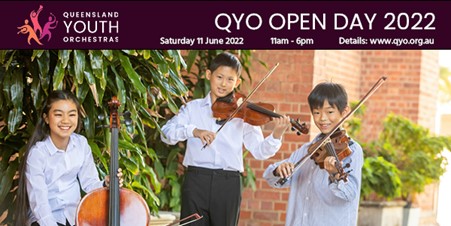 From Monday 27 June to Friday 1 July, the Queensland Conservatorium (South Bank) will be hosting its annual tertiary preparation workshop. The workshop covers topics such as entry requirements, audition skills and techniques, interview tips, theory and aural fundamentals, and much more. The workshop is an excellent opportunity for students who are considering a future in the music industry to discover some of the tertiary preparation and courses available to illuminate an avenue towards this goal. Further information and registration details can be found here.

Tomorrow, Saturday 4 June, the BGGS Instrumental Music Department will be presenting the Cathedral Concert at St John’s Anglican Church. The Cathedral Concert is an eagerly anticipated event on our performance calendar and tickets are selling quickly. Tickets can be booked through Humanitix.

Our Cathedral Concert features some of our most experienced musicians and ensembles, and this year will also feature guests Andrej Kouznetsov on Organ and Karin Schaupp on Guitar. The students from Chamber Strings, Symphonic Winds, Chorale, Chamber Singers, Symphony Orchestra, and Grammar Singers will enchant the audience with their exquisite sounds.

The beautiful acoustics of St John’s Cathedral provides the most glorious atmosphere to enjoy what will be a stunning concert. 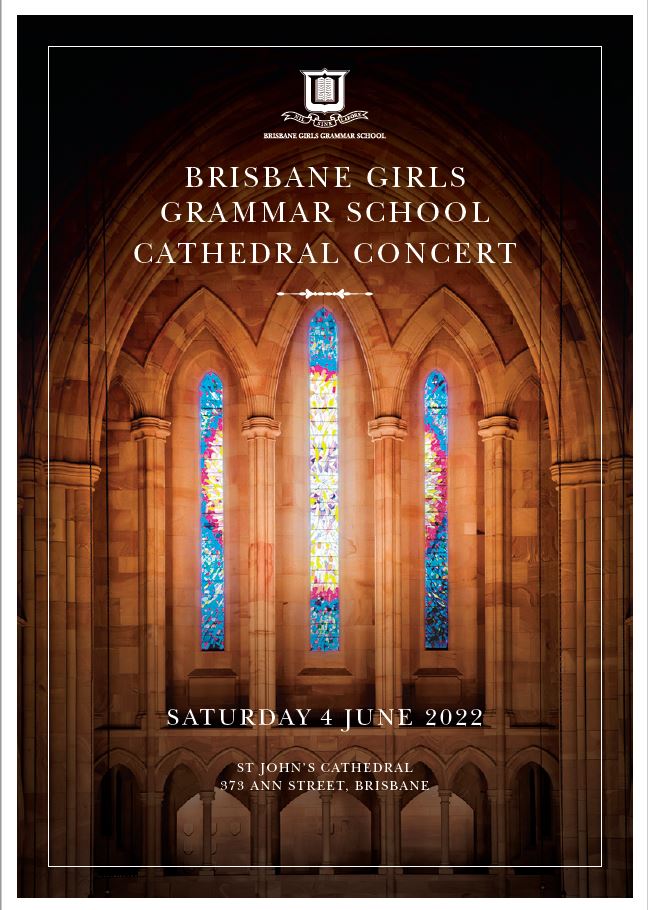 Next Friday afternoon, 10 June, the BGGS Choral Department will be holding our Junior Choral Workshop. The students of Voices and Vox will work with guest conductor, Mr Joshua Clifford, between 3.30 pm to 5 pm. We are so fortunate to have access to a selection of the finest musicians to work alongside our students.

Following the workshop, the MSG will hold a sausage sizzle between 5 pm to 5.30 pm and at 5.30 pm parents are warmly invited to a performance on Level 1 of the CLC to appreciate the hard work of students and staff. The performance is expected to be finished by 6 pm. We look forward to welcoming you then.

The Music Support Group still require some assistance to help ticketing and ushering at the Cathedral Concert from 1 pm to 2 pm, as well as packing down at the end of the concert. MSG and music staff will be on hand to assist you. If you are able to assist, please complete the sign up via this link as soon as possible. If you have any questions, please contact the MSG directly at msgbggs@gmail.com