Earlier this year, we were invited to participate in the 11th International Science Youth Forum in Singapore. Held at Hwa Chong Institution, delegates from 39 schools, including students from Mexico, Poland and Vietnam, were placed in teams to complete various activities. Delegates were inspired by Nobel Laureates and eminent scientists as they spoke about their research and life experiences in masterclass and dialogue sessions.

A highlight of the Forum was the Nobel Grand Ceremony where delegates could ask questions and learn from Nobel Laureates, Sir Tim Hunt and Dr Tuomo Suntola. These discussions deepened our curiosity and desire to understand the world, as well as teaching us valuable lessons. We also engaged in smaller masterclasses with Nobel Laureates, Professor Michael Levitt and Dr Ada Yonath, who spoke in depth about their research and discoveries, broadening our knowledge on the use of antibodies to combat cancer and the structure of ribosomes.

Prior to the Forum, we prepared a poster on mammary glands, using our research conducted at the Translational Research Institute as part of the SPARQ-ed Program last year. This was presented in an exhibition, where we shared our research with Nobel Laureates, educators and other delegates.

Groups visited different universities to view their research equipment and science experiments. Our favourite was the nanoscience lecture at the National University of Singapore, where we learned about the use of gold as a possible cancer treatment.

Teams competed in a Project Challenge, where we built a Rube Goldberg machine with the aim to launch a ball with a catapult, or fill a cup with water. After eight hours of preparation, we built our machines, conducted various experiments and presented an assigned physics concept to the judges and educators.

Ella Ng’s (12L) team placed first in the Catapult division. Her machine started when a double pendulum was released, pushing a marble through a series of obstacles, eventually knocking a weight off a ledge. This weight fell on a pair of open scissors, which cut the string and released the catapult.

Overall, the Forum was an exceptional experience and has inspired our pursuit to continue studies in the field of Science. 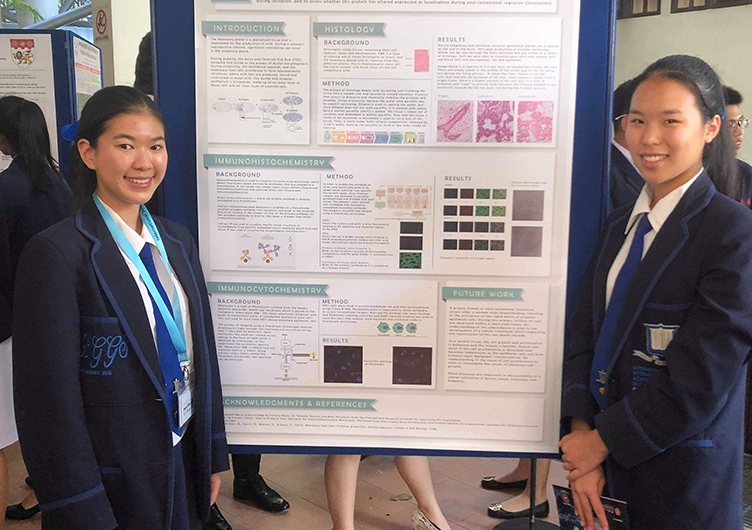