… the badge represents a symbol of invariance, an emblem of educational values that stand out against the passage of time; it serves to join one generation of learners to another; it constitutes an ideological and axiological constant in the fluxion of time, resisting the more transient values of the educationally fashionable or chic … (Synott & Symes, 1995)

In their article The Genealogy of the School: An Iconography of Badges and Mottoes, Synott and Symes assert that badges and mottoes are the ephemera which convey what Bourdieux and Passeron refer to as a school’s ‘charismatic ideology’: iconic items which perpetuate its character, traditions and values.

At Girls Grammar, the first two weeks of each academic year are highlighted by ceremonies pertinent to both the Year 12s and the School as a whole. Firstly, the Year 12 students receive their XII badge from the President of the Parents and Friends Association. This XII badge preserves the tradition and continuity of the first sixth form (VI) badge. In the days of forms, Roman numerals were used to designate cohorts and this concept has been carried through to this day with this badge.

The second occasion is the induction of the Student Council, where each member receives two badges and a blazer pocket. The ceremony involves the reciting of a pledge to the School followed by a response from the student body. The first badge and blazer pocket indicate the student’s position on the Student Council. This is a bar badge proclaiming each student’s specific role—Arts, Service, and Sports Captains or House Captain. In 2014, adding gravitas and distinction to these bar badges is the addition of a miniature School badge. This replica is reminiscent of the delicate ‘dress badge’ worn by the students in the 1930s, 1940s and 1950s and is suspended from the bottom of the bar. It will be a physical and constant reminder of the traditions the students protect, the values they exemplify and the demands of their offices: leadership, service and responsibility.

The second badge is the Student Council School badge. This has a banner at the top stating School Council and is embellished with laurel leaves on either side of the crest. The laurel leaves were a feature added to the badge in 1940 to designate the Prefect body. The selection of the laurel wreath is a traditional and historically-apt one. The laurel has its origins in Greek mythology and was reserved for display on the heads of heroes, victorious commanders, scholars and poets: those held in highest esteem and who were exemplars to others.

Each Head Girl receives a gold and blue enamel Student Council badge and a special Head Girl blazer pocket. These identify their special and eclectic roles within the community where they act as ambassadors, people of influence, shepherds in leadership, carers, facilitators and convenors.

The wearing of these emblems publically affirms the role to which each individual member has already committed. On 20 January 2014, the Council members approached the year with a clear understanding of the part they will play in maintaining the traditions and values of the School. They attended the fifth Student Council Conference held in the week before school commenced. There, they discussed ideas, were presented with insightful and wise counsel from Ms Ann Harrap, 1984 Head Girl and former High Commissioner to South Africa, and were challenged with problem-solving exercises by the Marrapatta staff. The benefits gained from this conference are best summed up in the girls’ responses used to create the ‘knowledge trees’. These trees, now on display in the School Library, were created when each Council member responded on individual cards to four leading sentences: I have learned that … ; Leaders are … ; Girls Grammar shines because … ; and My strength is … .

They believe that leaders are listeners, shepherds, dedicated, resilient, confident, approachable, encouraging, and ‘weavers of magic’. They learned that leaders can lead from behind, leaders are inclusive, leadership is vital at Brisbane Girls Grammar School; that the Student Council has a large role to play; that compromise is a powerful tool; and that we are all part of a team that needs to work together in order to go ‘above and beyond’. They believe that what makes Girls Grammar shine is spirit, teamwork, commitment to service, initiative, creativity, and excellence. Finally, the Council’s collective strengths were identified as kindness, humour, fairness, honesty, and fun.

When asked how they wished to be remembered by the School as a leadership group in one word, their thoughts spilled over and provided an insight into their humour, honesty, and fun. The words were: united, integral, enthusiastic, influential, involved, loving, inclusive, ideal, passionate, exciting, inspirational and fun.

After assimilating this information and experience, they worked collaboratively to establish goals and the motto for the year. Lively discussion distilled the thinking into the key concepts of motivation, integration and promotion: motivation to respect the School, strive for excellence, involvement, and being the best you can be; integration of year levels, service and sport, prefects and intrahouse; and promotion of individual talent, events, recycling, and BYOD.

Like the School motto, the yearly motto has the capacity to ‘… act like an epigraph, a linguistic beacon, signalling the School’s intentions and providing an explanatory mechanism for its success’ (Synott & Symes, 1995, 145). The motto was announced by the Head Girls Claudia Gulbransen-Diaz (12L) and Sarvashree Singh (12G) in the Induction Assembly on Thursday:

– Above and beyond with the Grammar bond –

The motto encapsulates the aspirations of this group of school leaders and will provide a beacon that guides the Council and the student body in 2014.

When reflecting on my article ‘Precious Metal’, published in 2014, it is both reaffirming and gratifying to remember that in 2015, as a way of welcoming our newest Grammar recruits and recognising the introduction of Year 7 into Queensland’s secondary schools, a commemorative School badge was created.

Conceived by Librarian—Special Collections, Mrs Jenny Davis, and myself as Dean of School at the time, the badge was to be gifted to Year 7 students and presented to each girl by her Year 11 buddy. However, former Chair of the Board of Trustees, Ms Elizabeth Jameson, and Principal, Ms Jacinda Euler, felt it was a fitting gift for all students in the 140th year of Girls Grammar, which was celebrated in 2015.

In 1907, the School’s badge featured a horizontal bar behind its centre, an embellishment on the 1903 Brisbane Grammar School badge design. For the 2015 celebrations, 1875 and 2015 were engraved on the central bar. If anything embraced ‘a school’s ‘charismatic ideology’—an iconic item which perpetuates the character, traditions, and values…’ (Synott & Symes, 1995)—of Brisbane Girls Grammar School, this did. Featuring the School motto, Nil sine labore, as well as a tangible reminder of 140 years, this replica served ‘to join one generation of learners to another’. The badge was even more precious because of its uniqueness in the School’s history.

In 2015, when students were asked why they were not wearing the commemorative badge, the frequent answer was that they felt it was too precious to wear daily and feared it could be lost. Its significance weighed heavily with them. In 2019, Year 11 and 12 girls are the only current students who receive this commemorative badge and it is extremely satisfying to see it adorned on the ties of many Year 11 or 12 girls.

Traditions endure, binding together generations; mottos are conceived, launched, embraced, and recognised, becoming a ‘call to arms’; and badges continue to be an important symbol of the responsibility each student accepts, the ideals she represents and the community with which she identifies. 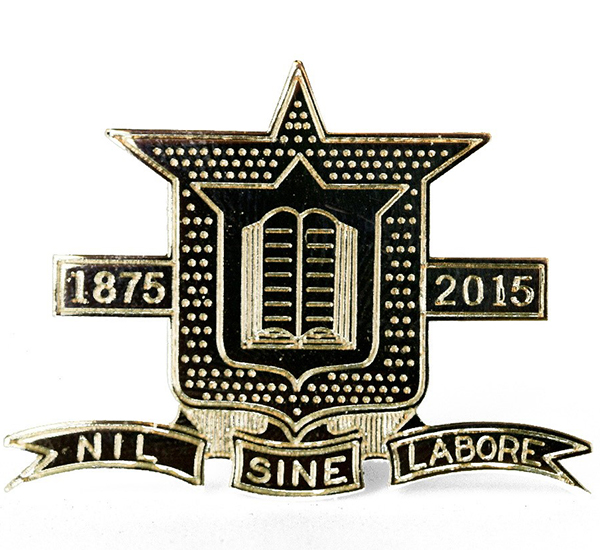 Related From the archive: the Insights collection News

Millennials and The Age of Opportunity

From the archive: the Insights collection | Friday 11 October 2019

From the archive: the Insights collection | Friday 13 September 2019

Encouraging our Young Philanthropists of the Future

From the archive: the Insights collection | Friday 23 August 2019

View All From the archive: the Insights collection News ▻