Today, BGGS celebrated International Women’s Day with a student installation adorning the School. Girls and staff shared the names of women from older generations who have inspired them with their achievements or who have in some way helped our society move toward gender equality.

With a focus this year on generational equality, International Women’s Day 2020 has encouraged a collective recognition of the contributions of women, and the pursuit of gender equality in all spheres.

At Girls Grammar, we have a strong history of ‘firsts’ with Grammar Women pushing beyond previously accepted societal norms. For a School conceived as a ‘radical experiment’ 145 years ago, the accomplishments of Grammar Women have contributed to the important rewriting of erroneous and restrictive narratives around the role of women in society.

We continue to want nothing more than for girls and young women to be able to pursue a path of their own choosing. They will contribute to society, through their careers and within their families and communities in their own very individual ways. Whether they use their particular talents and Grammar education in pioneering efforts dedicated to the ‘advancement of all’ or through their personally meaningful contributions within their own families and communities, the choice must be entirely up to them, but they deserve the opportunities that permit them that choice.

Tonight, we will celebrate the musical achievements of women at the third International Women’s Day Concert, presented by our Instrumental Music Staff and performed by our talented musicians. The concert will highlight a stunning repertoire of music written by female composers from around the world.

I know how much this evening’s performers—musicians and vocalists—have been inspired by their introduction an incredibly exciting range of music created by contemporary Australian female composers, in particular.

The Symphonic Winds will perform Through Healers Eyes, by Australian composer, pianist and recording artist, Catherine Likhuta. Catherine’s works have been performed by ensembles around the world, including on one of the world’s most prestigious concert stages, Carnegie Hall. Julia Potter has crafted Eyes on the Stars, to be performed by Combined Strings to encourage young women to embrace who they are, be excited at the prospect of ‘who they dream to be’ and be focused on attaining their goals.

On International Women’s Day, as on all other days at Brisbane Girls Grammar School, we remain proud of our important role in empowering girls and young women to find their place in the world and meaning in their lives, with the potential to contribute to the collective future of us all. 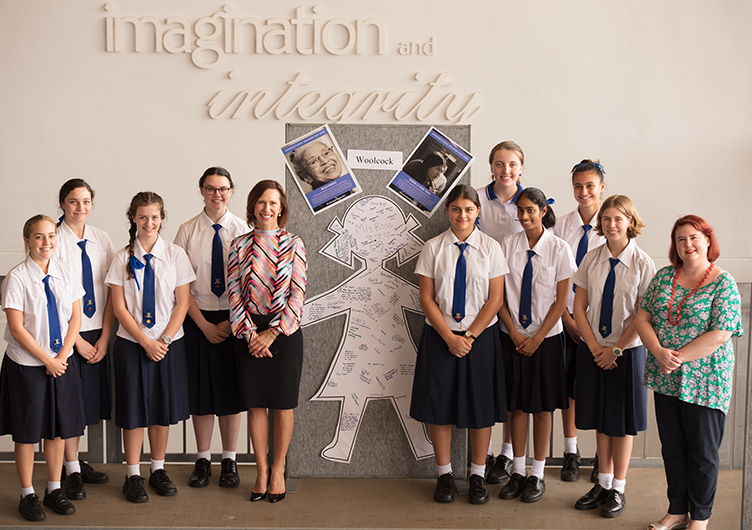 Ms Ruth Jans and Year 11 Women of the World representatives, who organised the IWD installation, with Principal, Ms Jacinda Euler.

Related From the Principal News

A Time For Positive, Meaningful and Long-lasting Change

View All From the Principal News ▻