In Their Words: Mr Alan Allinson 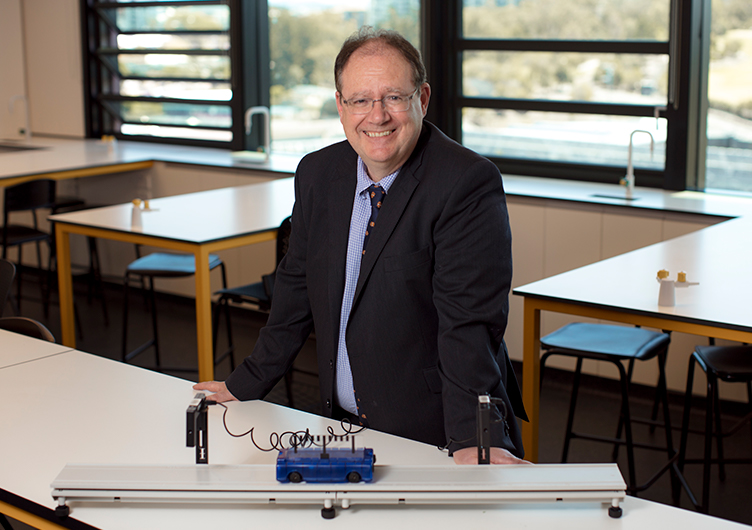 It was curiosity about the unknown that led Head of Physics, Mr Alan Allinson, to study Science, and a career in education spanning more than 30 years.

I’ve always been curious—about everything really—not just science. I loved mathematics, solving problems and learning new things. The only reason I decided to study physics was because I didn’t understand the subject—for me, it was another puzzle to solve.

Richard Feynman, winner of the 1965 Nobel Prize in Physics, said that physics is about the pleasure of finding things out, and I concur. It has no end and a simple goal: physicists seek to better understand the world that surrounds us.

As a Physics Teacher at BGGS, I am just that—I’m not required to be a biologist or a chemist—I can completely submerge myself in my discipline, and help develop a sense of awe and wonder in our girls about how things work.

In my almost 25 years at the School, I’ve also pursued my passion for physics outside the classroom. In 1998, I took the first Australian team to the International Young Physicists’ Tournament (IYPT) in Germany, a competition that featured only European competitors at the time.

After that, I established the IYPT Australia Challenge. As the Australian International Olympic Committee member of IYPT, I organise the tournament each year and select students to represent our country at IYPT.

Since the School’s involvement in the competition, I’ve travelled to parts of the world I would never have imagined myself seeing, met the President of Taiwan, and rubbed shoulders with Nobel Prize winners. In 2007, Australia won IYPT with a team comprising two Grammar girls—Antonia Morris (2007) and Kathryn Zealand (2008).

Despite these highlights, the greatest satisfaction comes from seeing our girls compete in a competition that allows them to truly be physicists and make new discoveries.

The School’s new Science building has also provided an area for discovery—our young scientists are still learning the significance of the building’s details, and as they do, staff continue to witness the moments of joy that come from learning something new.

This too rings true in the classroom. The moment a student grasps a new concept—the ‘lightbulb’ moment during an extended experimental inquiry—that’s what I find most rewarding about teaching. And of course, there are those instances when a student will share a story of a moment, a memory of their time at the School, as one that changed their life.

Just this week I received an unexpected email from a 2001 alumna, who reached out simply to say thank you. I had no idea of the profound impact I had on her time at the School and later her career—after 15 years as a mining engineer, and being asked what her dream job was, she realised that she too wanted to be a physics teacher.

Every day our teachers teach, knowing the great responsibility they have in shaping Grammar girls as they navigate some of the most important years of their lives. Parents instil great trust in our teachers, and I thank them for their confidence in our ability to enrich lives through learning.

The BGGS community is special and unlike no other. I had not intended to spend a quarter of a century here but when you’re able to do what you love every day—teach girls who are genuinely interested in learning—it is difficult to imagine working anywhere else.

In Their Words: Dr Phillipa Greig

In Their Words: Miss Meghan Parry