In Their Words: Mr Brad Jennings 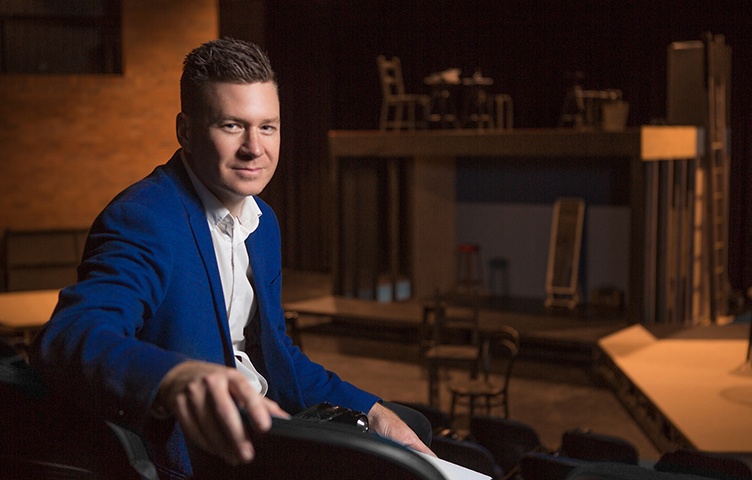 Mr Brad Jennings, Head of Co-curricular Drama, first found his feet in on the stage in a leading role in a primary school production. After running his own theatre company, Brad was eventually drawn back to the classroom.

My first experience with drama was an audition for the role of ‘Tarzan’ for my Year 5 drama production.

After a disastrous initial audition, I asked my teachers if I could try again. They agreed to let me re-audition, and this time, I was successful in being cast in my first acting role, which saw me wrestle with a blow-up crocodile in a kids’ swimming pool.

However it wasn’t until Year 10, when my family and I moved from Noosa back to my hometown of Maryborough, that my passion for drama was reignited.

Despite being somewhat disappointed that my time spent surfing at the beach had come to an end, I did find a renewed love for drama because of the influence of my Year 10 English Teacher. A former rugby player and a towering figure (a perfect fit for Tarzan if I’ve ever seen one), he encouraged me to study Senior Drama and inspired me to continue acting, which led me to pursue theatre after graduating from school.

I moved to Brisbane and enrolled in a dual degree, a Bachelor of Education/Arts (Drama), at Queensland University of Technology. It was while I was completing a placement at Dalby State High School that I co-wrote my first script, Highways, a play about how teenagers respond to living in rural communities. In my final year of university, I worked with students at Laidley State High School to write and produce a play, Ripples, about domestic violence and the impact on young people. I was able to raise funds, with the support of local councils, to stage both productions.

When I finished university, I moved to Townsville, and taught at Kirwan State High School. It was there that I met Steven Maxwell, with whom I would collaborate for the next two decades. After noticing a lack of authentic work for boys in Years 9 to 11, we wrote and staged Blowout, a play written about the lives and experiences of boys growing up in an all-boys school.

In 2002, Steven and I moved back to Brisbane, and established our own theatre company, Markwell Presents, to focus on innovative and educational cinematic theatre and combine our passions for drama and education. I spent more than a decade focusing on producing theatre and video design for Markwell Presents, and worked with numerous theatre companies, arts organisations and schools during that time developing skills in writing, direction, film and post-production.

When my second daughter, Mabel, was born, I returned to teaching, accepting a temporary, part-time position at All Hallows’ School. It was during this time that I experienced the moment that made me realise I needed to return to teaching full-time.

To many, it would have seemed innocuous; a teacher was leading students in prayer before an on-stage performance. For me, it was a moment of genuine connection—an encompassing moment where the rest of the world stood still for that teacher and those students in a shared acknowledgment of their journey together. I knew then that I wanted to experience those moments again.

A little while later, I attended Girls Grammar’s Senior Drama Production (2013), The Chosen, and was impressed by the quality and level of performance, and visible commitment from the girls. In 2015, I started at the School as a Drama Teacher, and eventually became Head of Co-curricular Drama.

My current roles afford me the opportunity to teach, while also working with students on our three annual drama productions; it is a challenging, inspiring and rewarding position.

If I’m having a bad day, I’ll arrive at rehearsal and my entire mood is shifted. I’m suddenly transported to another world; a world where the girls have transformed into their characters and are delivering performances that convey commitment, enthusiasm and a willingness to take a risk. I’m proud to see the girls consistently present theatre that is contemporary, genuine and creates a connection with their audience. We are in rehearsals from February to November, and welcome many artists-in-residence throughout the year. It is a professional environment in which the girls are able to create theatre and, hopefully, develop a life-long passion for drama regardless of where their paths after school may lead.