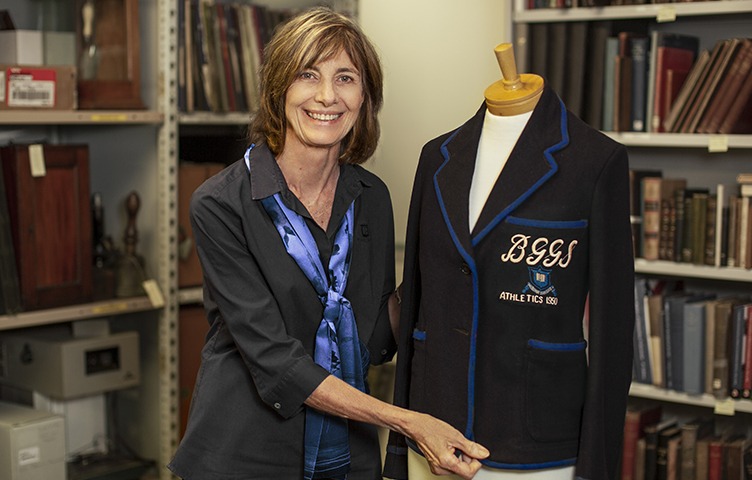 My career path was laid out for me a long time ago. I guess you could say that I’ve always been a librarian. I used to catalogue my books when I was little, and put library cards in the back of them; I still have a few of them at home today!

I grew up in South Africa. When I finished school, I worked overseas as an au pair in Greece; my host family lived on the beach, and I could look out the window and see the Parthenon. When I got back home I knuckled down and studied Ancient History at university, then did my Honours. After that, I started learning Librarianship, before we emigrated to Australia.

Before Nelson Mandela had been freed, while apartheid was still happening, things were pretty dire in South Africa. My husband and I decided that if we wanted our children to grow up in a comfortable, safe environment, we needed to move.

We moved to Masterton, New Zealand, for a few years. Then we came to Australia for a holiday and fell in love with Queensland. It had a similar culture, climate and environment to South Africa, and plenty of fantastic opportunities for our children.

After moving, eventually, I worked as a Liaison Librarian in the Health Science Department at The University of Queensland. That’s what gave me the idea to work in a School environment: I kept seeing students who knew very little about how to use the resources and databases in the library.

Girls Grammar is a beautiful school with a long and interesting history, so when I saw a Reference Librarian job advertised, I was intrigued.

The opportunity to work in the Archives arose in 2010. In this role, I have the best of both worlds—I spend some time in the library, working with students, and I also spend time in the Archives, meeting Grammar women and learning about the history of the School. It’s been fascinating. I walk around the Main Building sometimes, touching the walls, and think, ‘I wonder what stories these walls could tell us’.

At the start of the year I speak to Year 7 students as part of one of their first assignments in the Humanities subject. Students use primary sources from the School’s archives to complete an inquiry about a historical event—they can try on the uniforms, look at the prize books.

I particularly like to show them the Sir Charles Lilley silver trowel. In 1883 he used that trowel to lay the foundation stone for the Main Building.

On 28 February 1883, everyone was at Brisbane Grammar School for the Foundation Day event, and all students and their families walked across to this site to lay the stone. A newspaper article in the Brisbane Courier reports that a glass time capsule was laid into the stone, containing some coins, the newspaper of the day, and some quotations about the Trustees. Ever since that day, the foundation stone and the time capsule seem to have disappeared. No one seems to know where they are, absolutely.

For the first two years, the building was only half-constructed while the Trustees raised funds to complete the building. I personally think that when the second half of the building was constructed, they covered the stone. It could be anywhere within the foundation level of the building. Many of the Year 7 students want their dads to come in with their metal detectors to try to figure it out … it really captures the imagination.

I think I bring a certain focus to the practice of archiving—a focus on accessibility. Archiving from a librarian’s perspective is about relating historical items to what’s happening in the School today. I try to discern what’s useful, and look ahead to work out what future staff or students might need, rather than locking away every single item and never touching it again.

I never say no to an offer of an object or item, even a pile of old magazines—they often lead me to discover wonderful, random items. A few years ago a Brisbane Grammar School parent called me to alert me to an item he’d seen on the UK eBay site: a postcard dated 1904, written by a Girls Grammar student, sent to a friend in England. We purchased the postcard and it proved to provide quite an insight into the School’s history. On the front was a photograph of the School, and on the back the student had drawn a version of the School badge, with the motto on it. The author had written ‘We are the beautiful brains and beauties of Brisbane’, and she wrote of how the students loved wearing little silver badges.

Badges, and indeed a uniform, were not mandatory until the 1920s, but evidently the girls had already started to create those silver badges as a form of identification. Before receiving this postcard, I had seen other photos of girls wearing the badges in photographs taken around 1915, but then to receive this postcard with written evidence of even earlier adoption was a brilliant revelation.

The author signed it Marian Morison, and I actually have a photo of Marian, which I show to the Year 7 girls. They see how the postcard travelled all the way to England, sat in someone’s drawer for decades, and then returned to the School as part of the Archives.

My role involves piecing together small bits of information, and trying to fill in the gaps. Often I end up putting things aside, and waiting for things to fall into place. The archives are like a tapestry; each item is a little thread of history that you draw together to create a picture that shows what the School was like. It gives current students and future students a feeling of connectedness, perspective and continuity—a lot has changed, but much remains the same as well.

I love speaking to Grammar women when they come to reunions, and hearing their stories and ongoing love and passion for the School. The archives is one way of continuing that connection.

The School’s Archives were created in 1999, courtesy of funds donated by the Mothers Group. When I started, there were about 500 boxes of material sitting uncategorised.

My goal for the Archives is to eventually digitise everything! I am almost finished with School Magazines, and would also like to digitise all photographs. At the moment I digitise as they are required, but it’s a never ending process. Time doesn’t stop, I suppose.