In Their Words: Head of Lilley House, Mrs Sybil Edwards 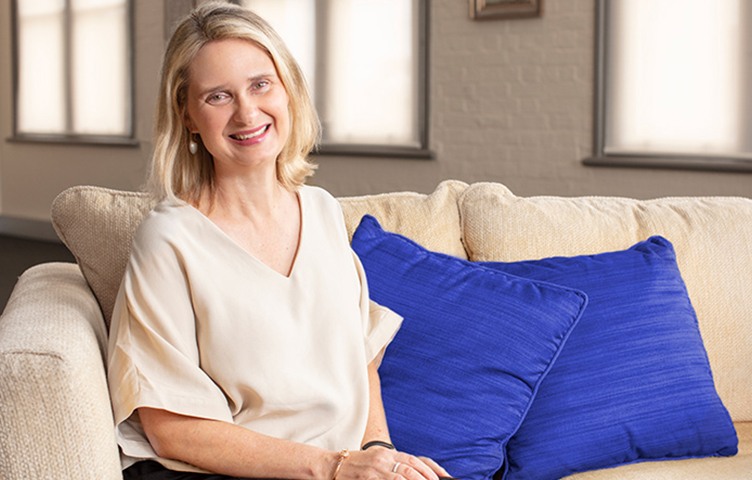 Heads of House play an integral role in supporting students, and their families, during their time at the School. Mrs Sybil Edwards, English Teacher and Head of Lilley House, has a connection to Girls Grammar that began when she first stepped onto campus as a Lilley student.

I have been a student, teacher, and now a parent at Brisbane Girls Grammar School, so have experienced our School community in many ways.

I always loved Drama at School—I won the Drama Prize when I was in Year 12—it was my real passion. I studied Drama at university as part of my Bachelor of Arts degree, and eventually completed a Diploma of Education at Queensland University of Technology.

After graduating, I taught at Marsden State High School before my flatmate told me about a Drama teaching job at Girls Grammar. I applied and started teaching at Girls Grammar in 1990—that was 28 years ago, almost a generation! During that time, there has been so much change, and I can honestly say not once have I ever felt bored.

While I’m not teaching Drama right now, I was exclusively a Drama teacher for many years, before English crept in after I had one of my daughters. I love both subjects deeply, and equally.

I was originally involved in many of the School’s Drama productions, and have written some of the School’s plays over the years. Once I have an idea for a play, I just have to get it down on paper and out of my head. One day, when I am retired, perhaps I will pick up playwriting again.

For one of the anniversaries of the School, Mrs Judith Hancock, Principal from 1977 to 2001, asked me to write a play based on her Master’s thesis, about Sir Charles Lilley, the School’s Founder. I wrote a short play titled ‘Sir Charles Lilley’s Legacy’ and the girls in Lilley House performed it.

These days, I help out with the Drama Club to keep my connection to Drama alive.

I have held the role of Head of Lilley House since the late 1990s—Lilley was my House when I was at School, so it’s a very special role for me. I took a break to act in the role of Head of O’Connor House for one year, so it’s probably been 10 years now that I have been consistently Head of Lilley House. I think it is good for students to have the continuity of the same Head of House, and it has provided me the chance to get to know our families quite well, and often I will see all of their daughters come through the School.

There is no such thing as a typical day for a Head of House. It can be very reactionary—I may have to find students to talk about something, call parents or resolve issues in the moment. I work closely with the Enrolments Team to help new students settle in to the School, and Heads of House also manage a particular year level’s assemblies and Ethics lessons, and lead the Year 7 Ethics courses.

I think giving girls the tools to thrive is so important—to not only balance the academic and social demands of school, but also to gain skills that will allow them to excel in their careers and relationships throughout life. This is the reason that I think the House system is such a good structure for student care.

Our senior Grammar girls really do enjoy caring for younger students, and each House has its own flavour and culture, and small traditions that emerge over the years. The girls identify with their Houses very strongly—it’s not just about intra-school competition. They see their House group every day, they have regular celebrations with their year level and the entire group, and they have many leadership opportunities within their House.

The House group system works well for staff as well as students. Our staff are such a great team, and as the Head of House, I am responsible for supporting all of the Lilley teachers as well as Lilley students.

The role is not without challenges, of course, but I feel very lucky to work here, among such dedicated staff, with such brilliant students, and alongside such caring parents.

The best part of my job is the relationships I have formed. I have been here so long that some of my best friends are other staff members. I count myself very lucky to work with people with whom I have such close relationships.

I have now taught many daughters of women I went to School with, and I’ve developed strong relationships with families that span generations. For example, Dr Kay Kimber, the School’s former Director of the Centre for Educational Practice, who retired in 2017, taught me English, I taught her daughter Drama, and then she ended up teaching my daughter.

I was at a Queensland Symphony Orchestra event recently, and sitting in front of me were two past students of mine. It was hilarious to see two middle-aged women calling out ‘Mrs Edwards!’ in the middle of an auditorium. I had to tell them to call me Sybil, please! When I taught them, I was pregnant with my eldest daughter, and as we were talking and catching up I realised that they are currently the same age as I was when I taught them, and my daughter is currently the same age as they were in School. Life passes so quickly.