In Their Words: Manager of Collections, Ms Lorraine Thornquist

BGGS alumna, former Director of International Studies and Creative Arts, and now the School’s Manager of Collections, Ms Lorraine Thornquist (1967), has long been connected to BGGS. In her current position, Lorraine manages the School’s Art Collection, curating pieces around the School to enhance the teaching and learning environments at Girls Grammar.

My brother, who is six years older than me, was a BGS boy and I remember being fascinated with his German textbook. I was at another girls’ school at the time, but their offerings weren’t as comprehensive as BGGS, so my parents decided to enrol me at the School.

When I started at BGGS, my language studies flourished. Eventually, I did well in languages and that’s what led me to becoming a language teacher.

At university, I studied French, Japanese and German. My father, who fought in the war, wanted to learn with me—it was a really special time in my life and made my studies that much more enjoyable.

I started my teaching career at Sandgate District State High School before moving to Girls Grammar in the 1970s. It was an honour to be asked back to the School. I knew firsthand the expertise required to teach at BGGS and it was a privilege to be considered worthy of the position.

I taught at the School for almost two years before moving overseas. I lived in London and worked at Harrods and then at a language school teaching English, before travelling through Iran and Afghanistan. I began to feel myself drift and a trip that was supposed to be only six months turned into two years—I knew it was time to come home.

As luck would have it, there was a position available at BGGS as a French Teacher upon my return. I started back at the School in 1976, and went on to hold the positions of Head of French and Head of Languages.

In the 1980s, I helped develop Girls Grammar’s Affiliate Schools Program. I worked with Tsushima Girls’ High School (now Seirinkan High School) and Mie High School in Japan, and also established a program between schools in Germany and France.

I loved my job, but eventually, I felt I needed to do something different, to be something different. I left the School in 1999 to work for Swiss Air in their global reservations centre, and used this time to pursue my other interest­—art—so I signed-on to volunteer at QAGOMA.

My parents had an appreciation for art and when they did buy a piece they’d try to purchase something original. We didn’t have too many pieces, but I would look at the art around our house and could recognise its worth and how it enhanced our home.

For me, art is someone’s voice, it can say so many things, be interpreted in so many different ways—political, social or emotional. It gives you a lot to think about. I love finding works that have a narrative to explore. I try to incorporate this into my QAGOMA tours where possible; it’s more meaningful when you have a narrative to follow through a series of works—it allows the viewer to connect on a deeper level.

My decision to study art and volunteer at QAGOMA came at a time when I thought I would have more flexibility in my schedule, but life had other plans! In 2003, I returned to the School, again, this time as Director of International Studies.

In February 2009, I received an award from the French Government for my work in creating cross-cultural ties between Angoulême and Brisbane. It came as a surprise, and the award was presented to me at Assembly by a colleague from Lycée St Paul School. It was certainly a career highlight and I still have the medal at home.

In 2010, I was appointed to the position of Director of Creative Arts, and remained in this position for the last seven years of my academic career, before I transitioned to the role of Manager of Collections.

I had wanted to work with the School’s Art Collection for some time and this seemed like the perfect opportunity to do so. I believe it is important for our students to live and learn in an environment that reflects artistic values and intent, where expressions of creativity are an integral part of their daily school life.

The School supports many alumnae artists, and this allows me to connect with Grammar Women from different generations. Just this term I visited Grammar Woman, Carol Watkins (1967), at her ceramics exhibition in Cooroy. Carol was in my graduating year at school. It has been more than 40 years since we were at school together, but when we met we reconnected over our shared experiences. This is true for any Grammar Woman I’ve had the privilege of meeting. We’ll always be part of something bigger than ourselves— Grammar girls at heart—and I’m proud to be a part of this community. 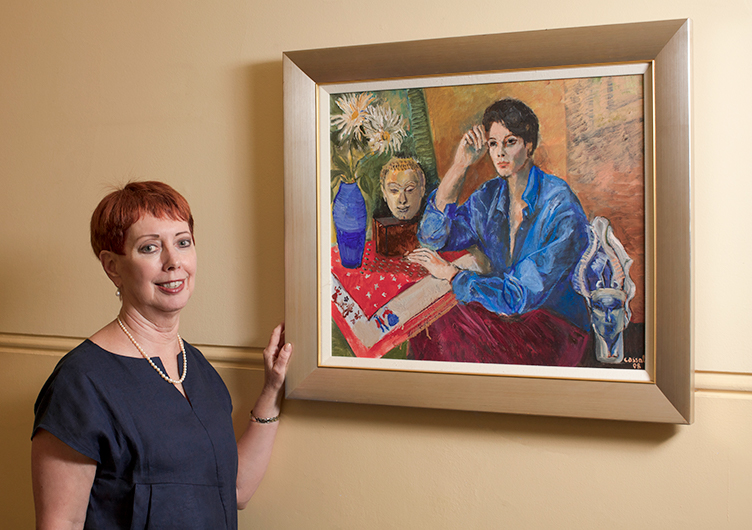