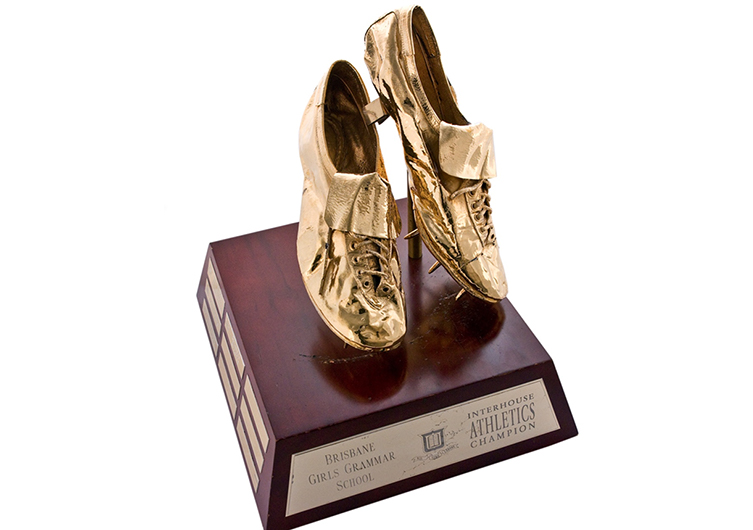 There have been many Girls Grammar students whose athletic prowess is worth celebrating, but athletics carnivals that provide an avenue to display talent were not part of our history from the foundation of the School. Interhouse Athletics only became an integral part of the Grammar sporting landscape in 1917 when, during World War I, the Headmistress, Miss Annie Mackay, reported that ‘this year, in order to help Patriotic funds, we held, for the first time in our annals, a Sports Day. This proved such a success in every way, that we have decided to have an annual Sports Day.’ (Annual Report, 1917, p2) Thus, the Sports or Athletics Day was established with the first QGSSSA Stephens Cup competition held in 1918.

Although a trophy for aggregate points on Sports Day was first presented in 1920 and named for Miss Essie L Mollison, a Science teacher and in charge of Athletics, it might be surprising to note that there was no prize for the individual Athletics champion. Indeed, the first evidence of the acknowledgement of an individual interform/House Athletics champion was once again at the instigation of a staff member, Mrs Meg Rorke. In 1952, Mrs Rorke, the Physical Education teacher, presented a prize to the ‘best all-round girl’ at the Interform Athletics. From this year until 1970, the winner(s) were listed in the Speech Day Prize List, and evidence suggests that they received a prize book.

After a hiatus of eight years (1971-1978), the Interform Athletics Champion was again celebrated, by Mr Max Emery during his tenure as Head of the Physical Education Department with the awarding of a silver cup. Julie Kemp (1980) was named 1979 champion athlete and received the cup. The criteria to win the cup was, simply, the highest points achieved by an athlete on the day.

By the mid-1980s, it became apparent that more refined criteria would present the School with a true, all-round athlete. This personally held view was supported by the 1985/86 Athletics Coordinator, Belinda Roden (1978), herself an Old Girl and athlete, and so I added the extra criterion that points needed be be gained in both track and field events, in order to win this award, thus tapping into an all-round athletic performance. 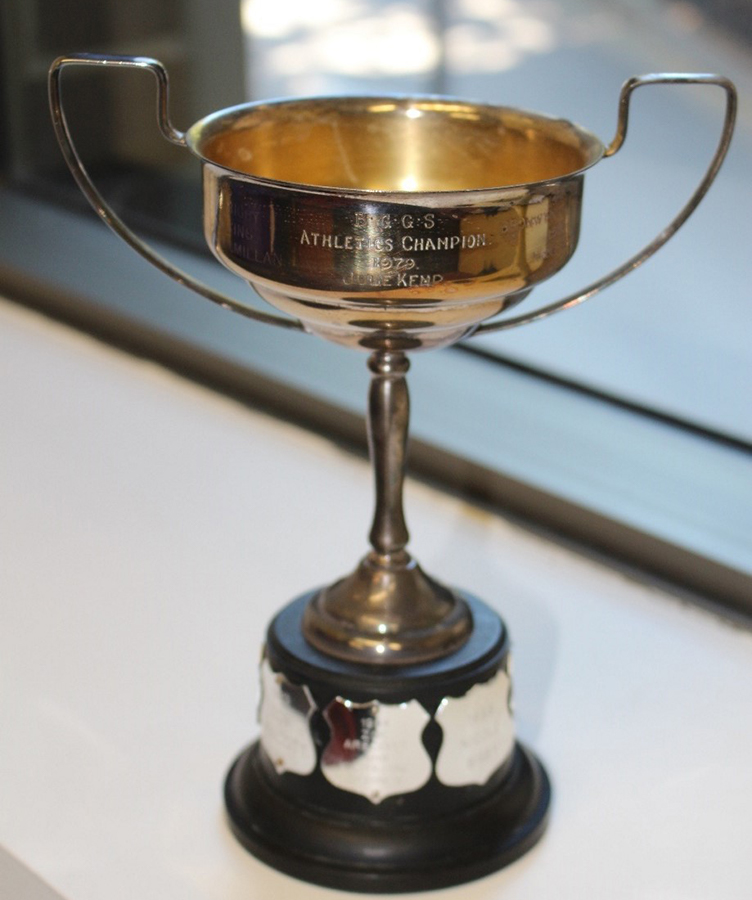 The original trophy was a 19.5 cm silver, double-handled cup. It would appear that, initially, this was destined to be a prize for the athlete to keep when looking at the position of the engraving of the winner’s name directly beneath the title of the trophy.

However, Julie Kemp returned the cup to the School, and it became a perpetual award. As with many trophies of its size, room for engraving was quickly exhausted and a new trophy was required by 1997. 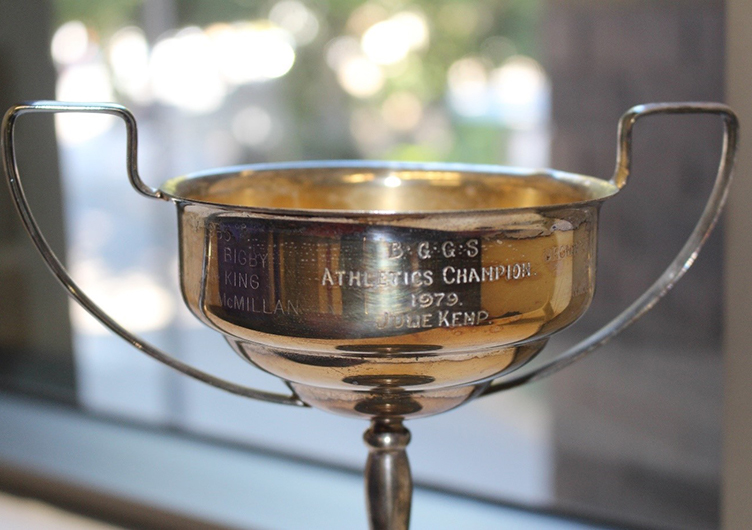 During the 1990s, Girls Grammar was experiencing a ‘purple patch’ of sporting success and the McCrae Grassie Sports Centre foyer always had a relevant display of girls’ athletic prowess. One of these displays celebrated several past Grammar athletes and included Daphne Pirie (Welch, 1949), who had loaned her running spikes, and Daphne Fancutt (Seeney, 1950), who had loaned her Wimbledon tennis racquet.

Having created these displays, their importance to Grammar sporting history and motivational impact was paramount to my thinking when the need for a new Athletics champion trophy became imperative. I decided to ask Daphne Pirie if she would be prepared to allow us to dip her spikes in 24-carat gold and mount them to create a stunning Interhouse Athletics trophy. Daphne, who had been involved in many ACHPER Sportsgirls breakfasts, appreciated the significance of role modelling for sportswomen and was chuffed to be asked. Daphne quipped, ‘I always liked a bit of gold!’

Daphne Pirie was an outstanding athlete with diverse sporting skills, having represented Queensland in Athletics, Hockey, and Golf and Australia in Hockey as Vice-Captain and in Masters Athletics.

Daphne’s love was the track, and in an era of the ‘Golden Girls’ Olympians: Cuthbert; Strickland; and Jackson—her opposition was fierce. Thus, her spikes carried a rich history. They were handmade in 1949 by JC Bain, a professional cobbler in Melbourne, for Daphne to run against Fanny Blankers-Koen and Shirley Strickland at the Exhibition Grounds on 2 February 1949. They were made of kangaroo hide and cost a staggering (at the time) £120. They were precious to Daphne and the School was honoured to gain her permission to use the spikes as a trophy. 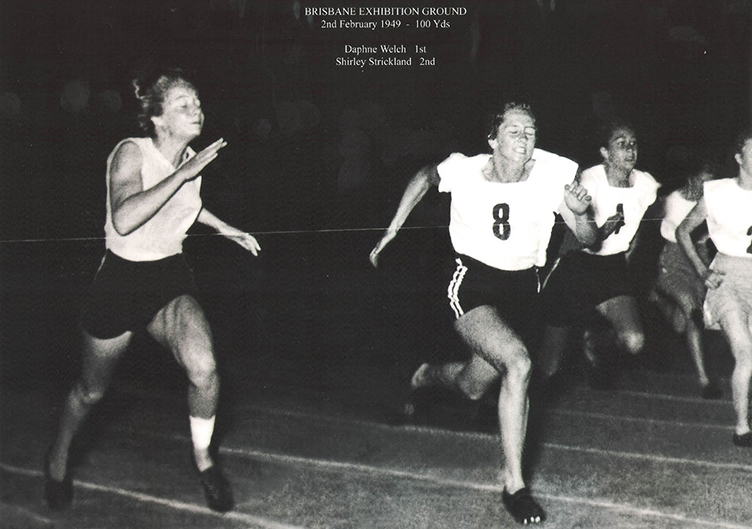 Abbott and Sons was the company selected to create this unique trophy for the School and, in 1998, the trophy was first presented by Daphne Pirie herself to the winner, Year 8 student, Frances Bain (2002), a third-generation Grammar girl at the Interhouse Athletics at the Church of England Grammar School on 13 August. Frances (Frankie) had scored the highest number of individual points for her House, England. Frankie maintained her high standard of athletics, winning the trophy every year of her secondary schooling, and became Head Girl in 2002.

This perpetual trophy captured the imagination of the School’s official photographer in the 1990s, Mr Jack Dale. He wrote in his photographic newsletter, Impact, ‘I sought permission to take a photo in the trophy tent, and particularly to discover the source of the flashing golden beacon that I had noticed previously. And there it was … a most unusual trophy, but so appropriate to the sporting occasion. It was a pair of glittering golden running spikes, artistically mounted on a polished base. A thing of beauty to be sure … I found that like most items and objects of special interest at Girls Grammar, they were intimately woven into the School’s history.’

The Interhouse Athletics Champion trophy captures so much of Girls Grammar: that individual striving for excellence; creativity; achievement; and our work ethic—Nil sine labore. The athletes who have won this prize, such as Frankie Bain, exemplify these traits and act as role models for the generations to come. 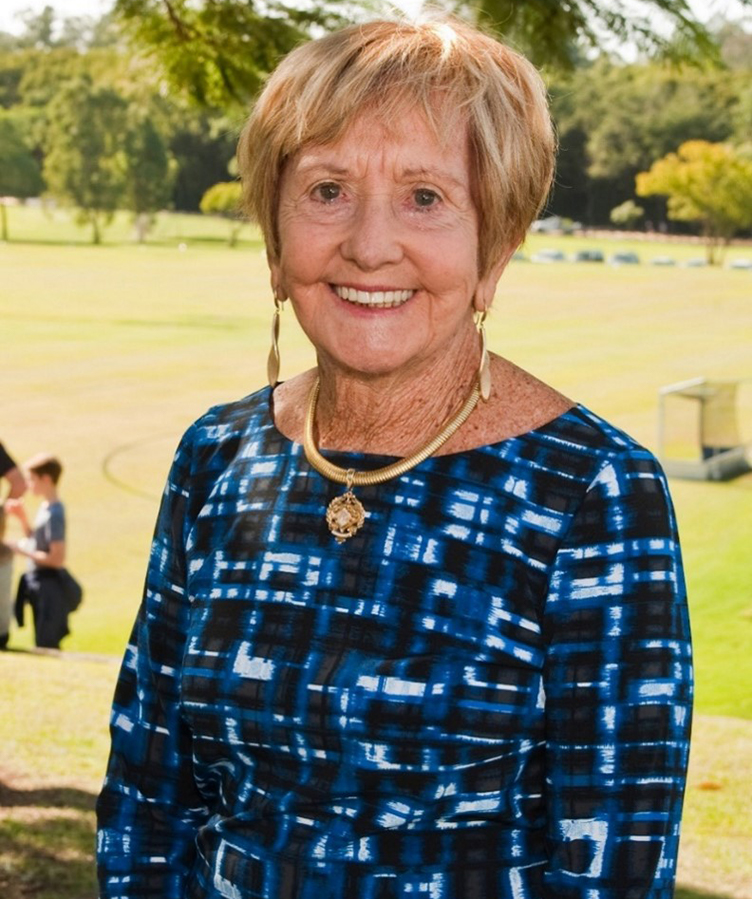 2015 Daphne Pirie at the naming of Rangakarra event 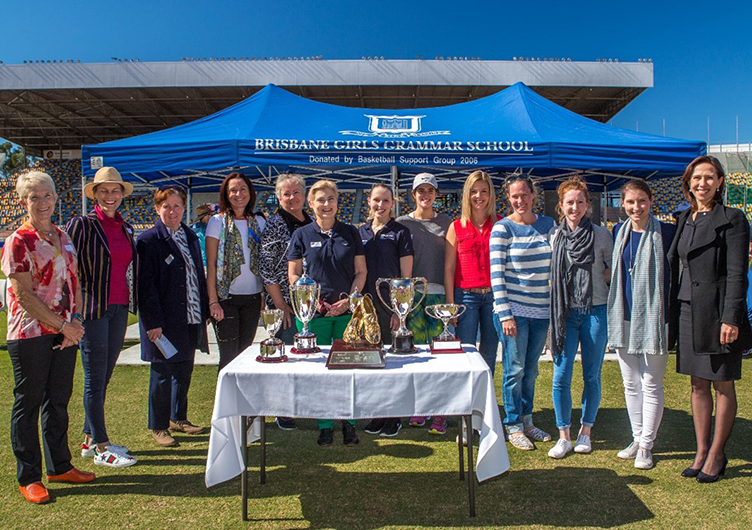 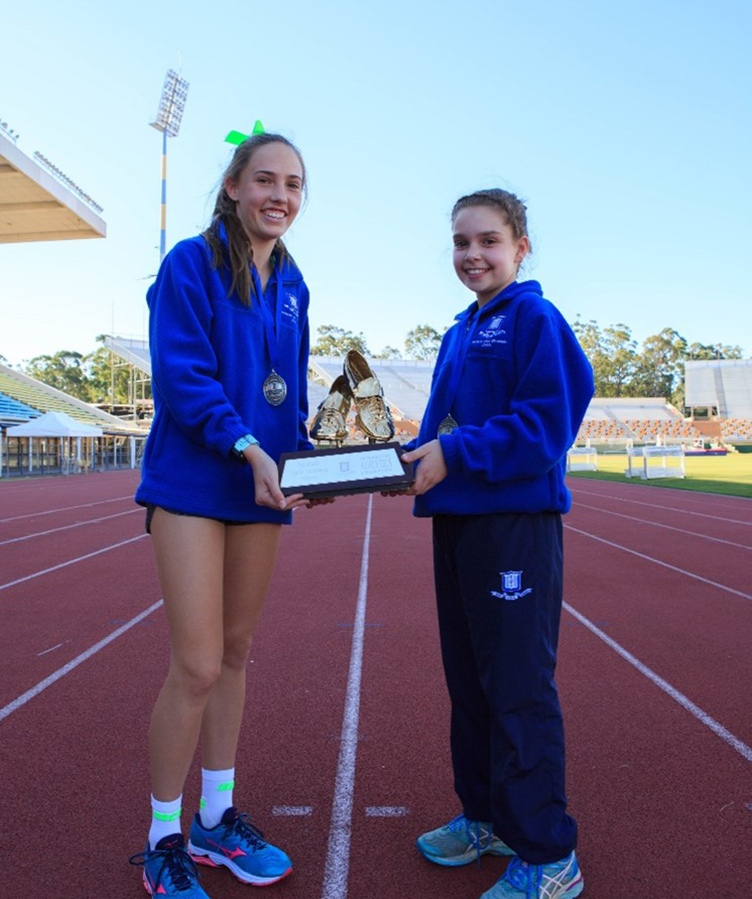