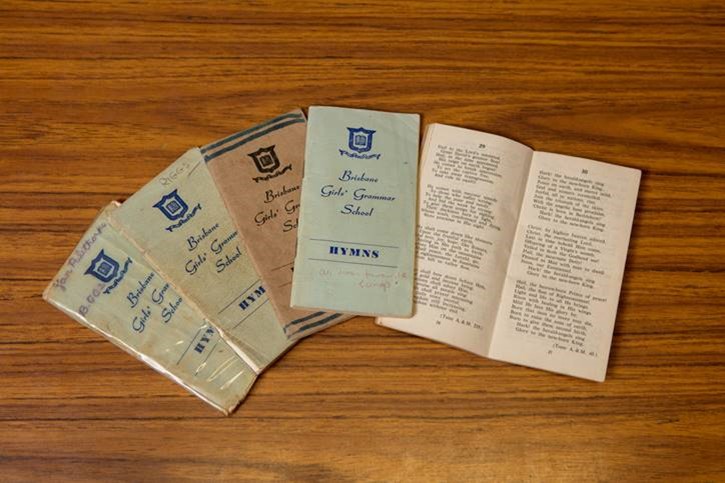 For a non-denominational school, one artefact in the archive often raises questions: the School’s hymn book. Why have one? What was its purpose? Why was it purchased by every student?

When both Brisbane Grammar schools were founded in the final quarter of the 19th century, Brisbane was a colony and a society Victorian in outlook. Organised religion was a significant part of its culture and society, and most families’ lives. Therefore, there is a logic to including hymns in school events and occasions. 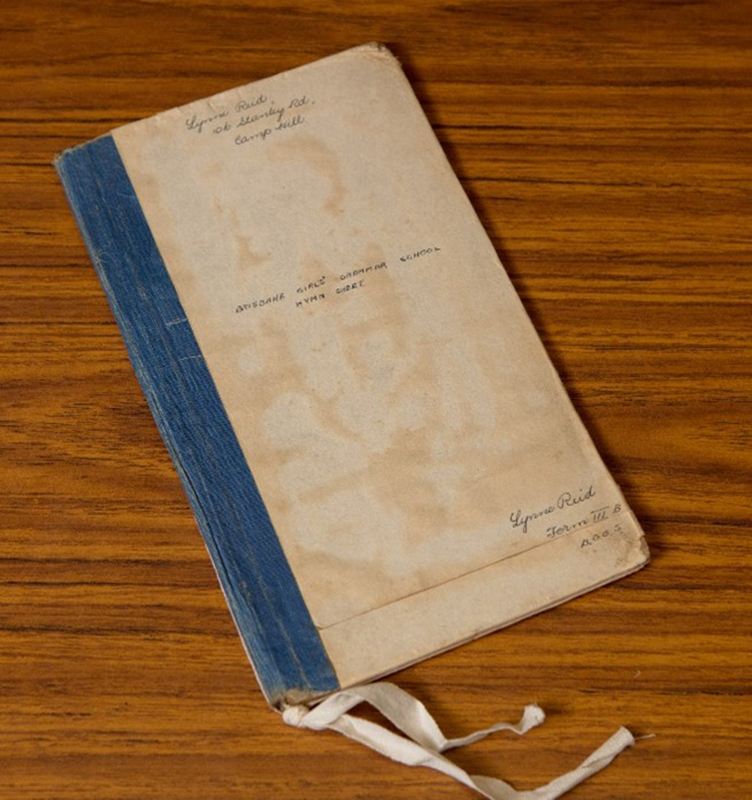 Perhaps the more thought-provoking question should be why, in a traditional and mainly Christian community, both schools were not aligned with a specific religion. Catholic and Church of England (Anglican) schools were certainly appearing, but the two schools, side by side on Gregory Terrace, did not make that choice and welcomed all students, irrespective of belief system or heritage. Perhaps they were making a statement that every child deserved equal access to a sound education. 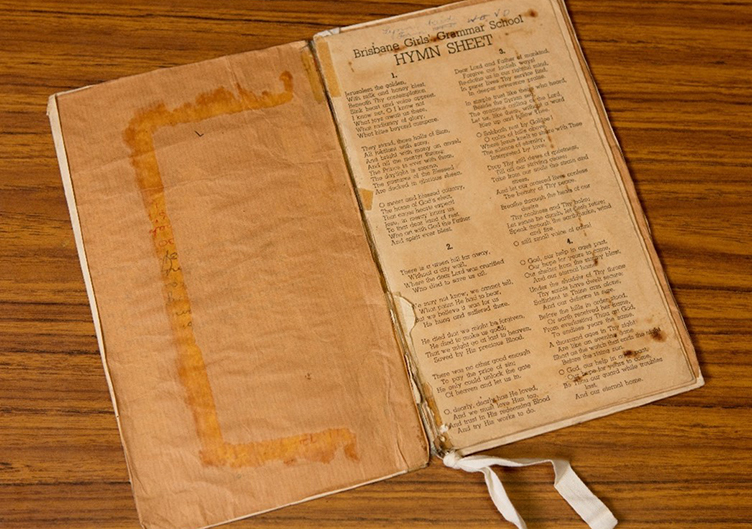 Much of the philosophy and the traditions of Girls Grammar stem from the beliefs of those original founders. That they held Christian values was clear as a guiding philosophy: fairness; the dignity and equality of every human being; loving your neighbour as yourself; working humbly with others for the common good. What should be remembered is that these values ring true with the beliefs of the other major religions, and we see these values consistently evidenced in Girls Grammar of the 21st century.

So, why is the hymn book something so clearly remembered by past students? Many of them, on returning to Grammar reunions, not only remember singing hymns at a daily Assembly in the heart of the Gailey-designed building, but also recall playing the piano accompaniment. This ritual was a feature of school life right up to 1973 when weekly assemblies took their place, and the hymn books were phased out in 1977. 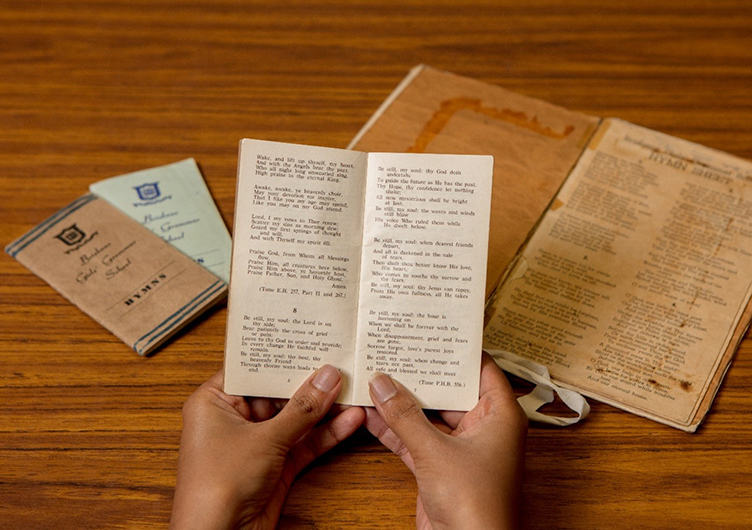 During the time I was a student at Girls Grammar, all students attended Assembly every morning in the Auditorium, lined up in classes, standing up the whole time, while the then Headmistress, Mrs Louise McDonald, stood on the stage behind an imposing lectern in front of the staff. The one item you simply had to take to Assembly was your hymn book, small and rectangular, and usually stored in the top pocket of your blouse. Winter was better as you could keep your hymn book in one of your blazer pockets all the time.

Later, as a teacher at this School, I once had the privilege of being the House Group teacher of a group of girls among whom several identified as belonging to each of four major religions, as well as students who were not religious at all. This class provided me with the opportunity to listen to one of the liveliest class discussions I have ever heard—and it was not about uniform or test results or formal dresses but stemmed from a question about why this School sang Anglican hymns. A range of views was aired from ‘I don’t agree, so I just don’t sing’ to ‘We don’t do many things as a total school community. I kind of like the fact that we all sing together’. There was a final position on which most of the girls seemed to agree: that it was not religion per se but the sentiments their words advocated that were important: community; giving; doing good; having a belief in a future; love; and gratitude. These principles strike a chord with the modern emphasis within the School on the precepts of mindfulness now so much a part of the day-to-day life of the students and the staff.

However, over time there has been a steady decrease in hymn-singing, indeed such a sharp decline that today only two remain a constant: the School hymn and the leaving hymn.

And when did a hymn become designated the ‘School hymn’? In the 1990 School Magazine, it was noted that ‘Fight the good fight’ was thought to be the School hymn, perhaps because this was the final hymn on the eight-page, double-sided printed sheet used from about the 1940s to the 1960s before the advent of the hymn book. In 1983, ‘Now thank we all our God’ was sung as the closing hymn at the Prefects Induction Service. In 1987, it was used as the opening hymn and was, for the first time, called the School hymn. In the following year, it reverted to being called the closing hymn but, again in 1991, it was called the School hymn and has been known as that ever since. This School hymn is now sung at important Assemblies, like the Prefects’ Induction and Anzac Day, and especially the End of Year Assembly and Presentation of Prizes.

It is interesting to examine the words of this hymn and speculate why it was deemed appropriate to be the School hymn. The initial idea expressed in the hymn is gratitude, a tenet of modern mindfulness, and the words continue to embrace and advocate positivity, the importance of family, sharing, and hope for a peaceful and fulfilling life. Perhaps these are sentiments that resound with many people, no matter their culture, upbringing, or religious affiliation.

In November 2020, some minor modifications were made to the words of the first and third stanzas by Dr Bruce Addison. These changes were made to emphasise the beautiful sentiments underlying the hymn’s core messages while, at the same time, choosing language that was more meaningful and inclusive, in order to meet contemporary expectations and understanding, especially for girls. Trinitarian language, in itself theologically challenging, was replaced with the language of warmth and care. These changes were critiqued by several theologians, including Dr Peter Catt, Dean of St John’s Cathedral. 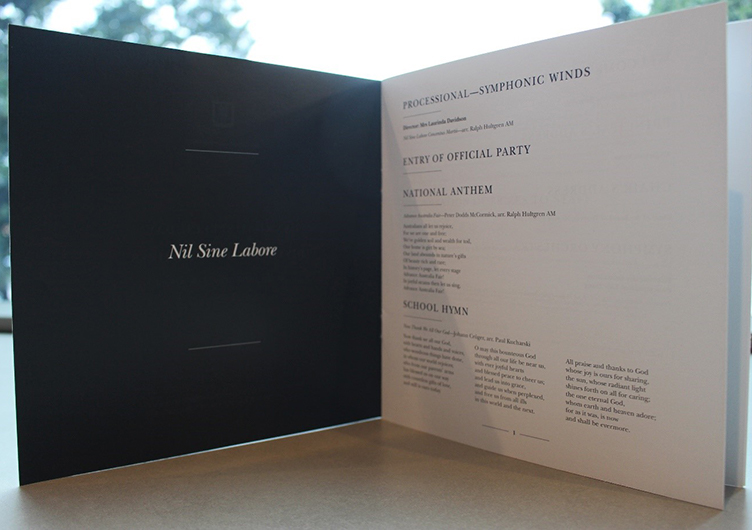 Such modifications are not new and the quest for contemporary and, more recently, inclusive language, is something that is familiar to us in the 21st century. The origins might even be evidenced in the feminist movements of the 20th century, the ideas expressed by Vatican II, and even the ‘it’s time for change’ sentiment of the 1960s.

The original text of ‘Now thank we all our God’, in German, was written by Martin Rinkart (1636) and translated into English by Catherine Winkworth in the 19th Century. So, the words have been interpreted by someone other than the author and there are probably many other versions of this hymn sung around the globe.

The leaving hymn, ‘Lord dismiss us with Thy blessing’, (sometimes called the dismissal hymn) has been used at End of Year Assemblies since 1975. It is also often sung at the end of school terms. This tradition provides an emotional and heartfelt farewell to those of the School family who are leaving the School and, for many of us, always brings a tear to the eye or a catch in the throat. For other students, this hymn brought great delight because it signalled holidays and was ‘belted … out, especially (by) the boarders’. (Janet Keefe 1964)

I still remember singing those hymns every morning. I still remember the awkward singing when one of the chosen hymns was unfamiliar. I still remember some of the words very clearly. Perhaps I am like Diana Cox (1964) who, at a reunion, commented that ‘even now when a familiar hymn is being sung my mind wanders back to the Assembly Hall and our lusty renditions of those old favourites’. It is often interesting to consider what aspects of school life stay with us.