The year was 1994, and the School was already looking ahead to planning celebrations for the 120th milestone the following year. Principal, Mrs Hancock, had thoroughly enjoyed The Mathilda Women, that year’s Senior Production, and she subsequently had a brainwave.

The Mathilda Women, written by Sue Rider in 1988, explores the vibrant lives of nine extraordinary women from Australia’s past, including Queensland’s first female medical doctor, Lillian Cooper. As part of the 120th celebrations, Mrs Hancock thought it would be lovely to highlight some of Girls Grammar’s notables who had contributed so much to our School community and our greater society.

As a Lilley House Group teacher, I was interested in the contribution made by one of our founding fathers, Sir Charles Lilley, and thought that it might be fun to write a play about him and have it acted by Lilley House students.

After finishing the short script, as a courtesy, I handed it to Mrs Hancock for approval. It was a bit of a shock when I was called into her office one Friday lunch to be told that the script was not up to scratch! Little did I know that Mrs Hancock was something of a Charles Lilley expert, having just finished her master’s thesis on the topic. She gave me her thesis to read over the weekend, and with rehearsals starting the following week, I felt the pressure to produce something more acceptable very quickly. For once, the gods of inspiration struck, and after reading Mrs Hancock’s thesis on Saturday, I slept on it Saturday night and woke up on Sunday morning with it all in my head.

The Beginnings script and ephemera

Mrs Hancock’s thesis looked at the reasons why Queensland would be the first in Australia to establish free, secular education for all children regardless of class, religion, or gender. She pondered whether Brisbane, being a frontier town with no real social elite, made it a prime setting to embrace new ideas and experiment with notions of equality. Sir Charles Lilley was passionate about the right for women to have access to quality secondary education, and, in 1874, he chaired a Royal Commission into Education that found that there was wide public support for the idea of giving girls the same educational opportunities ‘as their brothers’.

Among his many achievements—from being a Queensland Premier and Attorney General—helping establish Brisbane Girls Grammar School in 1875 was undoubtedly one of Lilley’s finest. The play, Sir Charles Lilley’s Legacy, featured characters such as the cantankerous BGS board members who made life difficult for Mrs Janet O’Connor, our first Headmistress, to Charles Lilley’s 13 children. We even had cameo appearances from the very young children of the Head of Lilley House, Marise McConaghy.

1995 Beginnings – ‘Mrs O’Connor with the Trustees’

Beginnings included dozens of girls of all ages from all areas of the School. Compared to today’s polished, professional drama performances, it could be considered quaint. Still, it was, I think, heartfelt and close to our hearts–and a fitting celebration for our School’s 120th birthday. 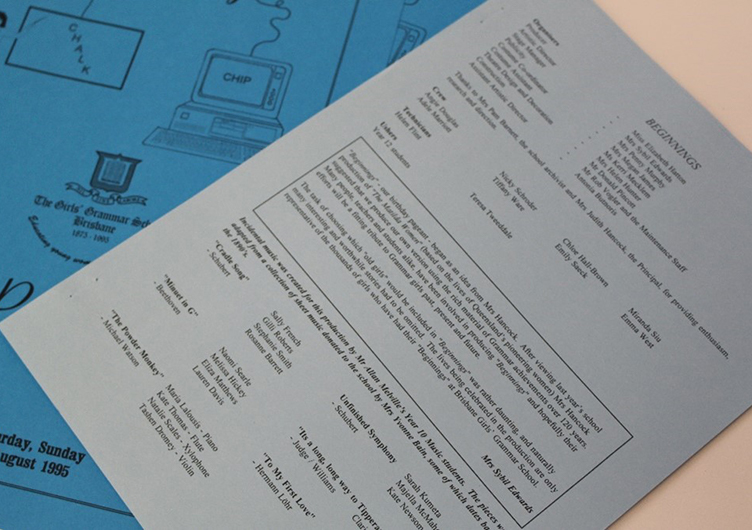 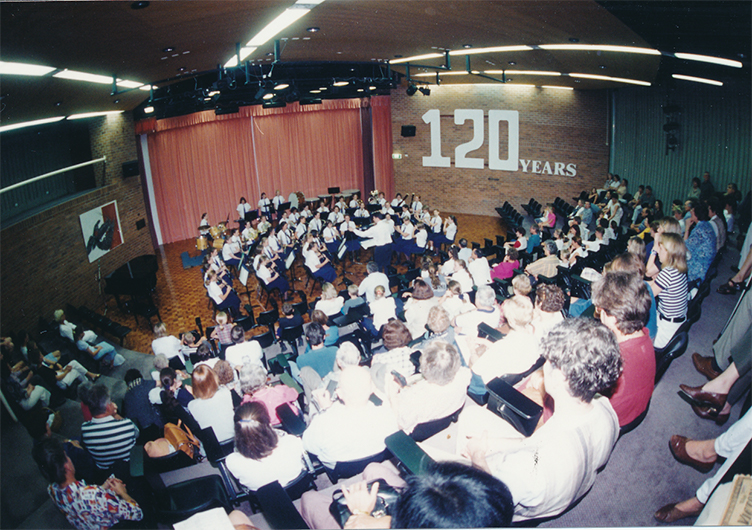 1995 Gehrmann Theatre during the Beginnings production