In July 2015, the Archives Department received a phone call from a member of the community suggesting that the Archivist have a look at something interesting being auctioned on the UK eBay website. After typing ‘Brisbane Girls Grammar’ into the search box, a most unexpected and surprising object was among the list of available items.

There was an artefact from the past, uniquely valuable to Girls Grammar. It was a postcard displaying a black and white photograph of the Main Building taken from Gregory Terrace on a cream background. The neat and somewhat curly handwriting on the card was in black ink, and the writer had dated the card ’24/8/04′. Next to the photograph on the card is an amusing note written by ‘Marian’ to her friend in England:

This as you will observe is the famous BGGS where all the Brains (?) & Beauty (?) of Brisbane congregate. This is our school crest and we have little silver ones which we wear as brooches and at the Boys’ School they wear them in their hats. Hoping you are all quite well, With love from Marian’. 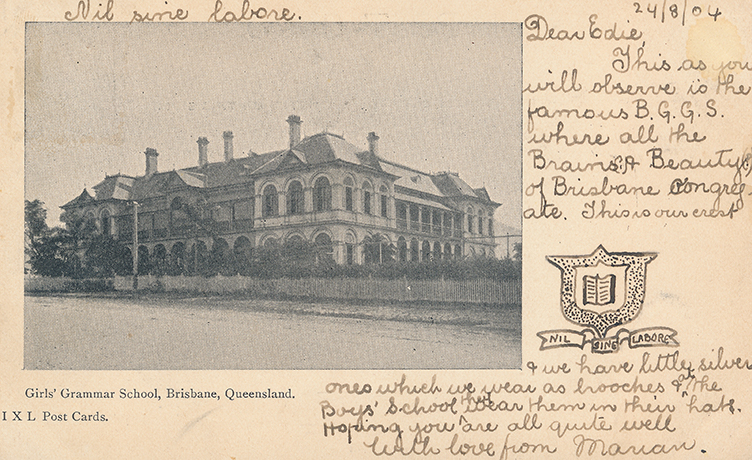 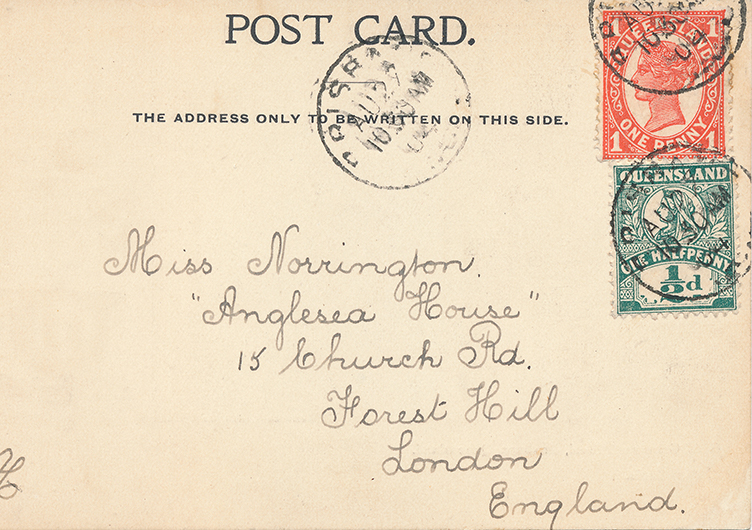 A disdainful piece was published in the Sydney Mail on Wednesday 16 May 1906, about the purpose of postcards described them as ‘dingy’ and a craze that ‘will play itself out in time’ as ‘the message is of no earthly use except to complete the postcard’.

How wrong this writer was! Our eBay postcard contained a wealth of information. It is the earliest indication that pupils were wearing a badge to School as early as 1904, long before any type of uniform.

We also learn about Marian (MM), who wrote to Edie in 1904 telling her about the school she attended in Brisbane. From the card, I think we can say she had a sense of humour, was creative, and was obviously proud of her ‘famous’ School. We do not know who Edie was, but we certainly know something about Marian. Looking at the Enrolment Register, the only student at Grammar in 1904 with the initials MM was Marian Wilhelmina Morison.

Marian was a student at Girls Grammar from 1904 to 1906, when she sat for the Senior Sydney University examinations. She attended Sydney University at the same time as her friend, Kathleen Lilley, also an Old Girl of the School, and future Head Mistress. Once Marian had obtained her Bachelor of Science degree, she taught Mathematics and Science at Maryborough Girl’s Grammar School. After taking time off from her teaching career to look after her family, she returned to teaching in 1930 at Fairholme College, where she spent the next 13 years. So much for being ‘of no earthly use’!

To complete the story of the postcard, we are fortunate to have a photograph of Marian with her VI Form classmates taken in 1906. 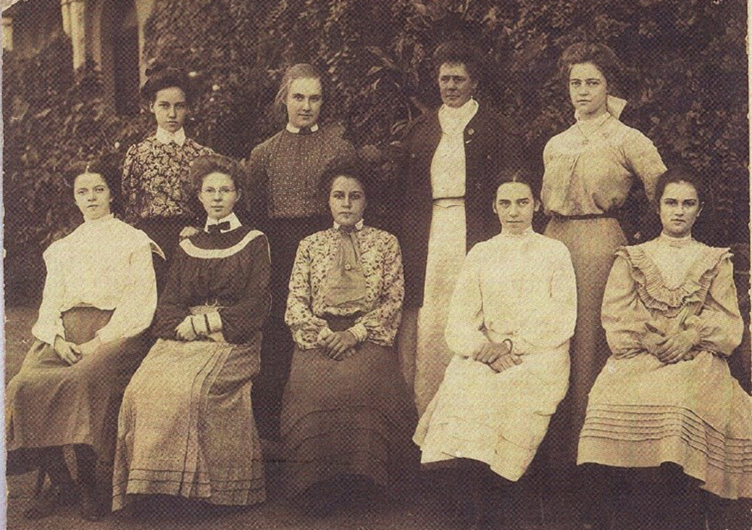 The School did win the top bid when the card was auctioned and paid two pounds and 20 pence for it. An apparently insignificant piece of card contained information worth so much more. The obvious excitement in showing Edie her school, the carefully drawn badge, and the inclusion of the motto in pride of place above the picture attest to a student who spent the time and money to send this news, important to her, to the other side of the world.