From page to stage to page: The Chosen script

The Chosen, written by Lachlan Philpot, was the first commissioned and first published play by Brisbane Girls Grammar School. It was the result of a successful collaboration borne out of creativity, imagination, and the stars aligning.

A Grammar girl rises to the challenge, faces the unknown, and relishes the drama. This has been the approach to learning from the beginning. The sense of choosing to be tested by seeking out new opportunities is a thread that has run through the history of the School. That may be one reason why the Drama Department was thrilled when the School gave the green light for a proposed commissioned project that saw awarded Sydney playwright, Lachlan Philpott, write a play with, and for our students, to be staged as the 2013 Senior Drama Production.

This collaboration was the brainchild of Ms Joanne Martin, Head of Drama at the time, who had worked with Lachlan years earlier when he was teaching drama in Sydney. He had since become a successful playwright, shortlisted for, and awarded, a number of prestigious playwrighting awards. After directing an earlier play of his called Bustown, for the 2011 Senior Drama Production, Ms Martin thought it would be an inspirational opportunity for our drama students to gain more insight into the playwriting process, and the collaboration to commission our own new playscript with Lachlan was forged.

The artistic process for the development of the work saw Lachlan visit the School for three sessions across six months to workshop ideas with a select group of drama students. He came up with a few basic ideas, but it was all that was needed to stimulate dynamic discussions and provide jumping-off points for the keen students. Ultimately, shared themes and issues of fitting in and finding one’s path surfaced.

Lachlan found connections between the group’s concepts and inspiration from his recent viewing of an SBS documentary titled, My Mother Talks to Aliens. He conducted interviews with Australians who shared similar stories, and it became clear that many people who claimed to have any sort of alien encounter were the subjects of ridicule. Lachlan posed this alien concept to the group and what ensued was a proliferation of excited conversation, giggles, and brainstorming of related concepts: being chosen; the line between truth and lies; having belief; and being believed. The students’ voices, responses, and perspectives were an integral part of the process. Lachlan gained insight into the School structures, both formal and informal, and soon the context and complication for this new story emerged. And the writing process began. Drafts of the opening scenes were delivered by the end of the year. 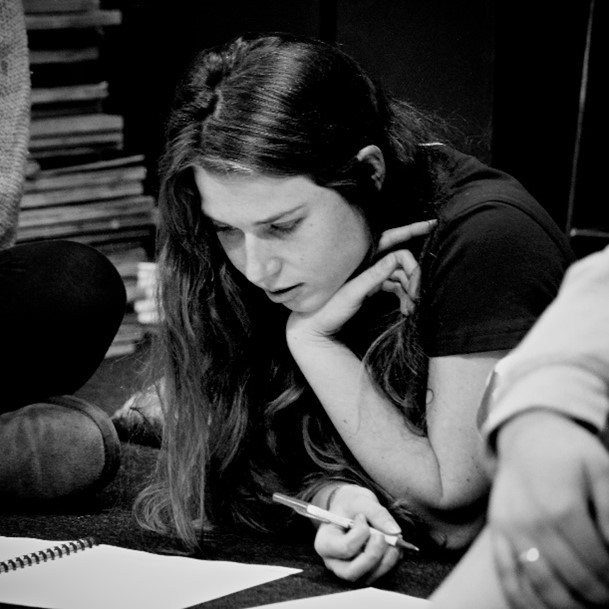 The drafting process was seamless—albeit complex—with many interstate phone calls to seek feedback and ponder questions. It was a trusting and joyous collaboration. The final work was a beautiful, contemporary story that wove a teenage girl’s difficult journey of starting at a new school and facing reality, using the poetic metaphor of intergalactic and stratospheric wonderings and escape. 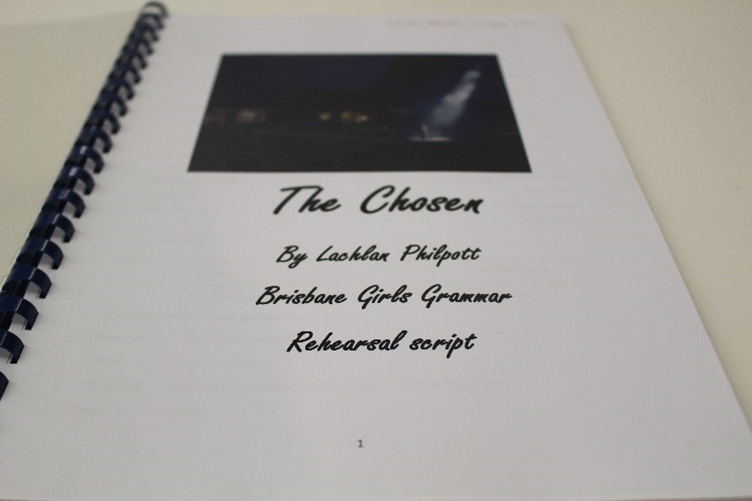 The process from scriptwriting to theatre-making began in the following year, 2013, as the School production process of auditioning began. With an excited and talented cast, Ms Martin led the direction of the new work, and I was privileged to assist. The production saw one of the most elaborate and technologically advanced set designs the Gehrmann Theatre has housed, with innovative projection mapping illuminating an impressive rocket-like stage structure. Sold-out shows saw audiences amazed and moved by the theatrical magic and emotive story. 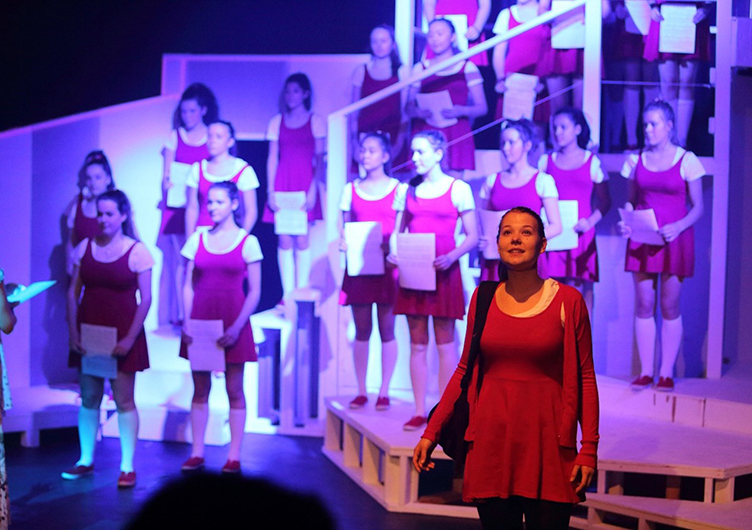 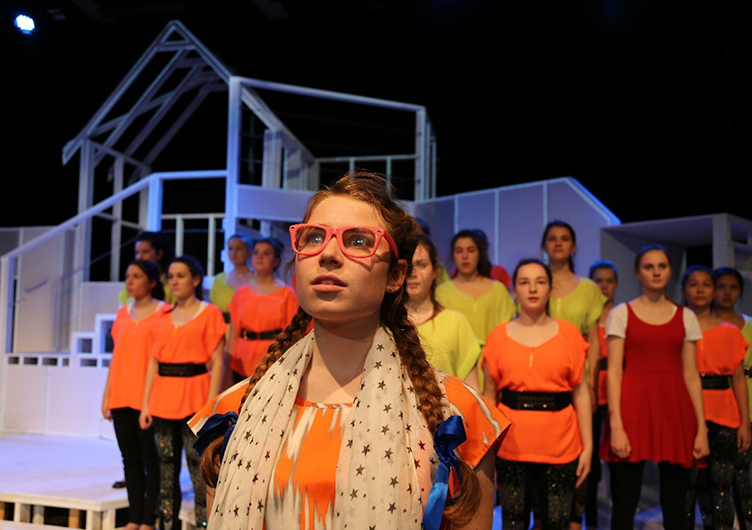 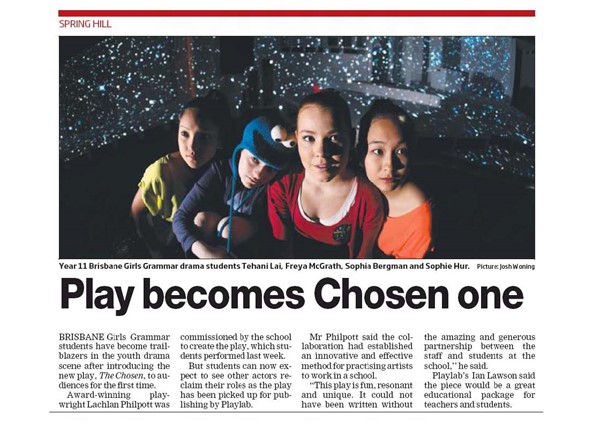 Lachlan travelled to Brisbane to watch opening night and was enthralled with the quality of acting and directing. This was the final stage of his writing process, seeing it translated to the stage. He made further small edits and the collaboration with the School expanded to working with Playlab publishers to release the very exciting publication of The Chosen in October 2013. Many schools have since staged the play as their own school productions or studied it as a core text in their drama curriculum. It was also shortlisted for an AWGIE playwrighting award in 2014.

Published Playlab copy of The Chosen

The Chosen was a first, and paved the way for Girls Grammar’s second commissioned work in 2017, Spontaneous Human Combustion. It also attests that at Grammar, the skies and beyond provide no limits. This object of substance, the published script of The Chosen, represents Grammar’s sense of adventure and reflects the philosophy of the School, and the Drama Department: that continued practice of innovation offers the most exciting creative opportunities for our girls. 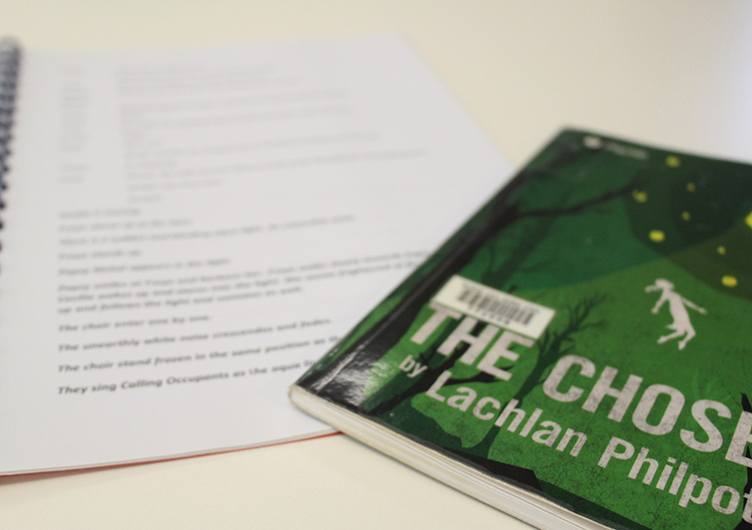 Rehearsal script and the published Playlab copy of The Chosen