Publishing a school newspaper is not unique, nor was it new to Girls Grammar when this idea was approved by the then Principal, Mrs Judith Hancock, in 1992. Grammar girls had created ‘newspapers’ before this [1]. The earlier versions were often light-hearted, even irreverent, publications but there were other opportunities to publish more serious information. The School magazine has always afforded students the opportunity to report on school life and schoolgirl interests, but this 1992 concept was the chance to produce in a commercially printed, broadsheet format. Indeed, one of the earliest student reactions was that it ‘looks like a real newspaper’.

Grammar Gazette was Mrs Hancock’s preferred name for the publication, and this was appropriate not only because of the alliteration but also because ‘gazette’ had become a widely accepted term for a newspaper. During the early and middle 16th century, the first Venetian newspapers cost one gazzetta. However, the Grammar Gazette was, and is, free to readers, but cost those who made it a great deal of time, creative thinking, and serious application.

The first Grammar Gazette was released in Term 4, 1992. As student reporter, Taryn Burns explained, this concept was suggested by the ‘Public Relations group’ who felt that ‘more in-depth coverage of current events and achievements inside the school community was required’. Mrs Hancock gave her permission and a group of Year 11 students and staff advisors set the presses in motion. The first edition was a large format, professionally printed broadsheet, eight pages in length. The front-page story was the opening of the Judith A Hancock Communications Centre, complete with an official photograph.

The original committee, charged with the production of this publication was determined to make it as professional as possible and this attitude was carried over to the organisation of personnel. The editorial group consisted of student editors and subeditors, student reporters and photographers, and two staff consultants: IT specialist and teacher; Paul Bennett, and me.

The founding student editors were Naomi Just and Joanna Sing, with sections managed by Erica Dunstan and Jo Larsen (sport), Kym Smith (arts), and Taryn Burns (features). Design components were overseen by Eva Wood (all 1993 Graduates). In addition, a student cartoonist was ‘head hunted’ and provided original illustrations to comment on school life and add interest and section headers. Cartoons started to appear in Issue 2, Term 1, 1993. One clever and popular cartoon appeared in Volume 2, No 3, Term 2, 1993. It accompanied an article about a program that provided Grammar girls with the opportunity to visit real-life workplaces to observe professions of interest. 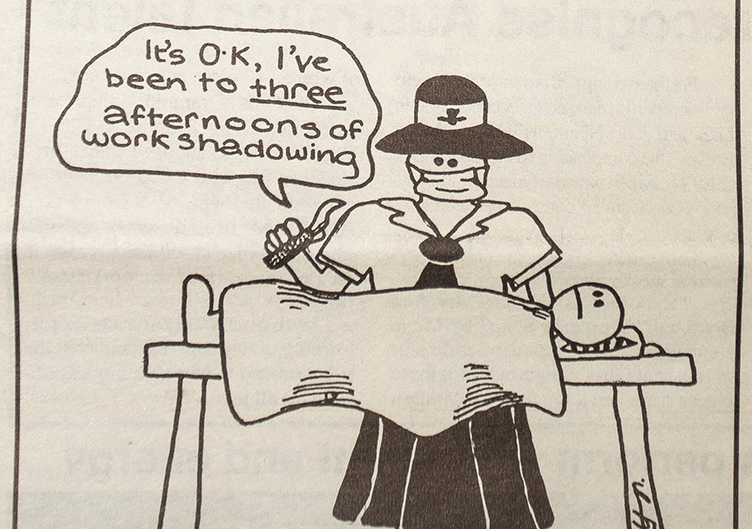 1993 Gazette, Vol 2 No3. How cleverly tongue-in-cheek was this cartoon. It makes the reader smile using just one image and a few words

Heated discussions about what stories and photographs were to be given precedence on the front and back pages, as well as what should inhabit the preferred right-hand pages always eventuated. Each newspaper was then completely set up digitally by the staff consultants with lively input from the student editors before being sent out to professional printers. There were even advertisements from outside organisations and companies (just like the earliest School Magazines) to help defray printing costs.

It was a considerable commitment to fill the Gazettes with interesting and topical items, (the largest edition in 1995 was 20 pages long). Each term, the editorial committee held meetings at which various ideas were bounced around before assigning reporters and recruiting extra student and staff writers. 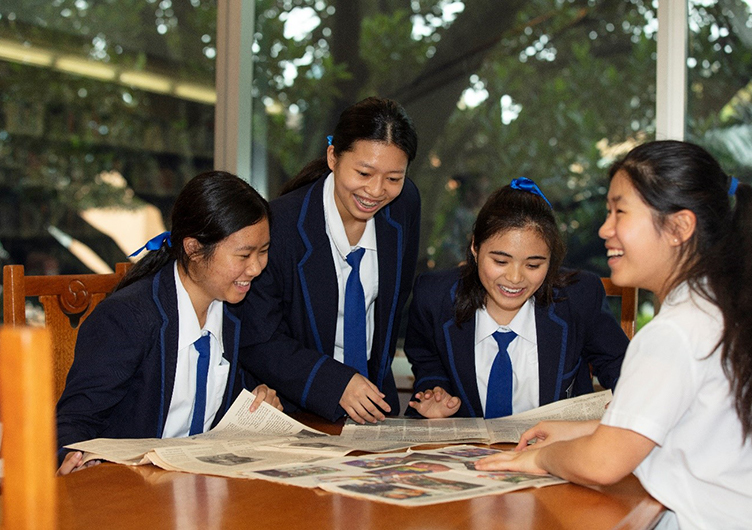 However, it eventuated that it was not a problem for the editorial committee to identify stories to fill the pages. There was, and is, something always happening in school life: service and curriculum activities; a dynamic program of events from concerts to drama productions; from dinners to celebrations; and a packed sporting calendar. These were obvious places to start, but it soon became apparent that stories about past students and their post-school careers and lives, the activities of the parent groups, regular contributions from the Chair of the Board of Trustees and the Principal, and offerings by talented student artists and photographers appeared to contribute to the diverse content. This variety allowed readers an intimate insight into the complex, interesting, wide-ranging life of the Grammar girl and her interests and activities at School and after.

Gazette Vol 2 Issue 4, 1993 p4. One unique occasional column was written by ‘The lone haranguer’. This anonymous contributor satirised behaviours that could be questioned. Their identity remained a mystery

The Gazette was not immune to that inevitable aspect of life, change. The newspaper began to include colour in select editions—in Term 3, 1993, the plans for the new ‘sports centre’ were displayed for the whole community. In the second half of 1999, many more colour pages appeared, and this edition also saw the advent of a more robust quality of paper used. In 2002, the publication morphed into a 12-page colour booklet format and the reins were taken over by the section of the School now called Communications and Engagement. By the Spring issue of 2012 (the 135th anniversary of the School), the Grammar Gazette had developed into a 35-page colour magazine, a structure that continues to this day.

Some of our early Gazettes

Grammar girls have always displayed a strong sense of commitment to their School and its community. Some would say that service is part of the DNA of a Grammar girl and undertaking such an ambitious publication for the benefit of all who read it is evidence of this attitude. Girls donated many hours from their busy school lives, their creativity, and their dedication to doing their very best. The result was a window into Girls Grammar life, but it was also a publication that celebrated the skills, activities, and interests of a School that assumed girls should seize opportunities, speak out, and aim high.

[1] Refer to earlier article on Sock and Custard, which also acknowledges Vox discipulorum, an even earlier incarnation. 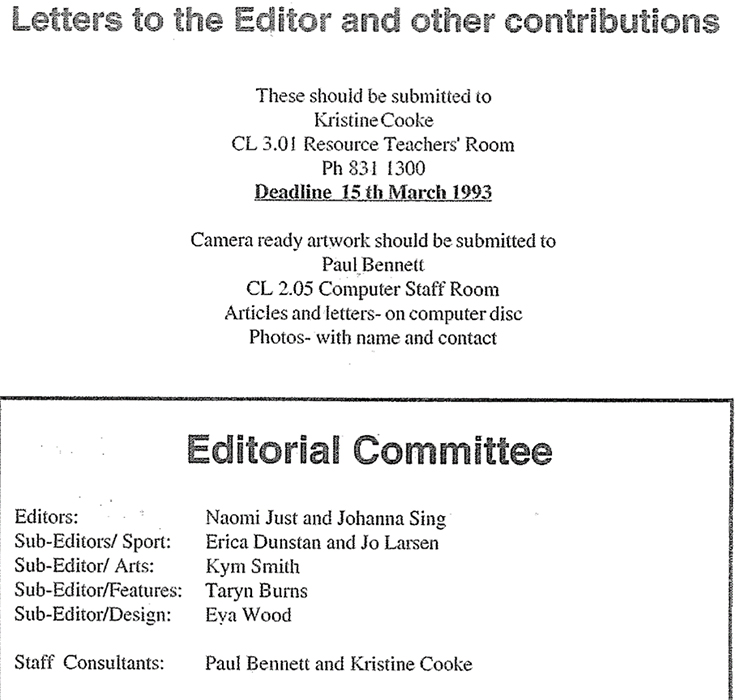 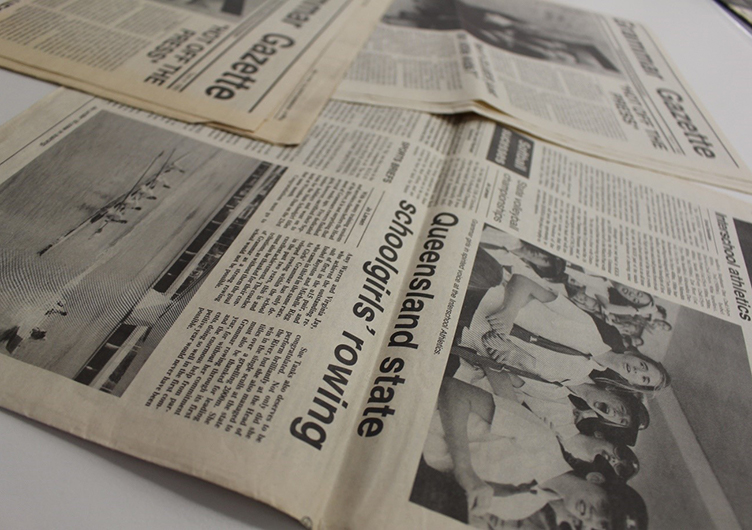