It never hurts to show people the important things in life, periodically

Where do Art and Science meet? How can the basic building blocks of Science be brought to the forefront? How can you create something static but interactive at the same time? Open to the elements, a special installation on the wall of the fourth floor of the BGGS Science Learning Centre answers these questions. A stylish, intriguing, and artistic version of the periodic table, the idea of the design team from M3 Architecture, takes pride of place. 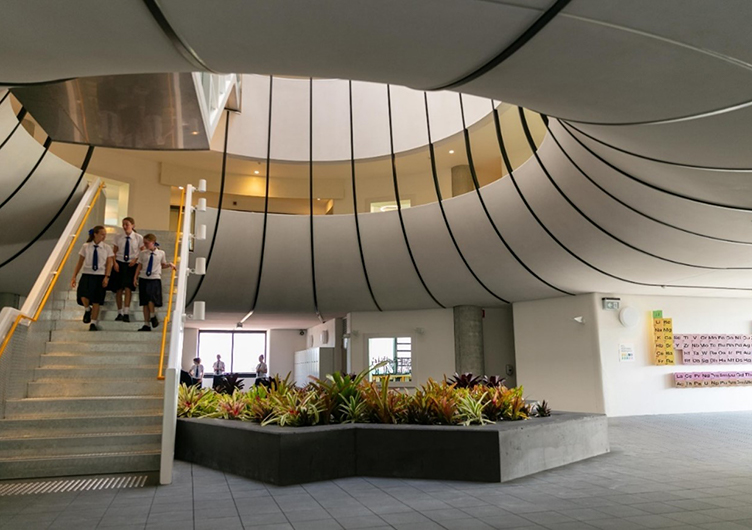 2020: SLC Entrance level with the Periodic Table to the right

An education in Science instils the need to ask ‘why?’—to be curious about the world beyond ourselves and to seek answers using logic, reason, and evidence. This philosophy of inquiry was evident from the earliest days of Girls Grammar. While very few women had the knowledge or training to teach Science, in 1889 a Miss M Barton, who arrived from England with Certificates from the University of Cambridge and the London Cambridge, and the Science Department of South Kensington, is generally thought to be the School’s first female Science Teacher. Later, in the early years of the 20th century, Miss Beanland, Miss Pells, and Miss Mackay all promoted the teaching of Science, each one asking the Board of Trustees for a Science Laboratory. The first Science Laboratory was opened in 1933, followed by the 1956 Science wing with its subsequent upgrades, until the construction of the 2020 bold and beautiful Science Learning Centre.

Interior of the Science laboratory 1933

Central to the new building’s architectural design is the concept of ‘teachable moments’: that the building itself be imbued with references to scientific ideas to invoke wonder and awe in the students. From the central void with staircase pointing true north, to colour schemes that echo the lifecycle of stars, to quotations from some of the world’s pioneering female scientists, there are moments of discovery and learning throughout the space.

For generations, the periodic table has been integral to every Science classroom in every school around the world, including here at Girls Grammar. Therefore, it seemed appropriate that a periodic table, an elegant, information-packed, physical representation of the properties of natural and synthetic elements, should feature in the School’s new Science Learning Centre. Today, a senior Science student with knowledge of the number of protons in the nucleus of an atom and the Aufbau principle of electron configuration could recreate the periodic table, but its existence predates any knowledge of subatomic particles (protons and electrons). 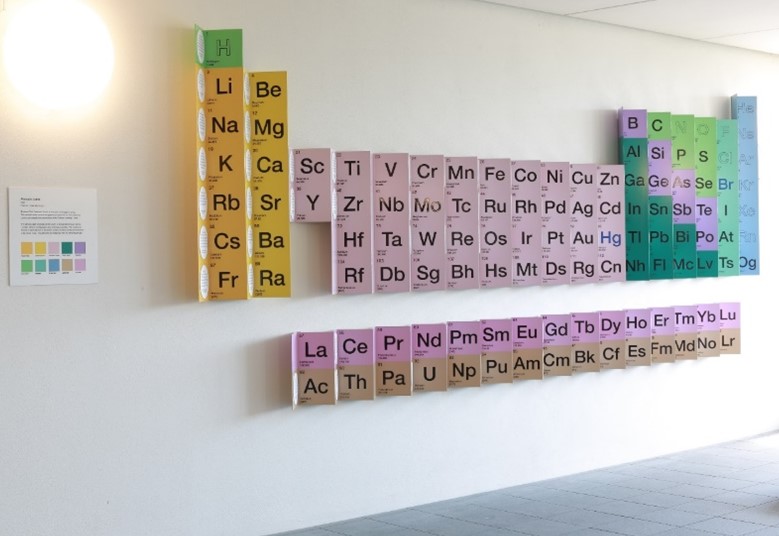 The question, ‘What is matter made of?’ is one that has been asked for millennia: by ancient Greek philosophers, Leucippus and Democritus, who considered matter consisted of small solid particles that they called atomos, meaning indivisible; to Aristotle who argued that matter could not be divided and is composed of four elements—earth, air, fire, water; to Sir Francis Bacon who argued that natural phenomena could only be properly understood by developing hypotheses and performing experiments. This scientific approach inspired much experimental work throughout Europe, which led to English scientist, John Dalton, publishing his atomic theory in 1803. Dalton proposed that matter consisted of tiny particles that he, too, believed to be the smallest unit of matter. To honour Leucippus and Democritus, he called these particles atoms. Dalton believed that all atoms of the one element were identical and that whole-number combinations of atoms formed compounds. Together, elements and compounds made up all matter.

The story of the periodic table complements the discovery of elements and is, like all Science, the result of contributions from many esteemed scientists who studied the elements and their properties. The first attempts to organise the elements were made by French geologist, Alexandre-Émile Béguyer de Chancourtois (1862, 66 elements), and German chemist, Lothar Meyer (1864, 28 elements). However, it was Russian chemist, Dmitri Mendeleev’s, periodic table, published in 1869, that became most recognised. Mendeleev arranged the elements in the increasing order of their atomic masses in horizontal rows till he came across an element whose properties were similar to those of the first element. Then he placed this element below the first element and thus started the second row of elements. When he could not find an element with expected mass and properties, he left a blank space. Mendeleev organised it according to atomic mass and chemical properties—not atomic mass as it is today. 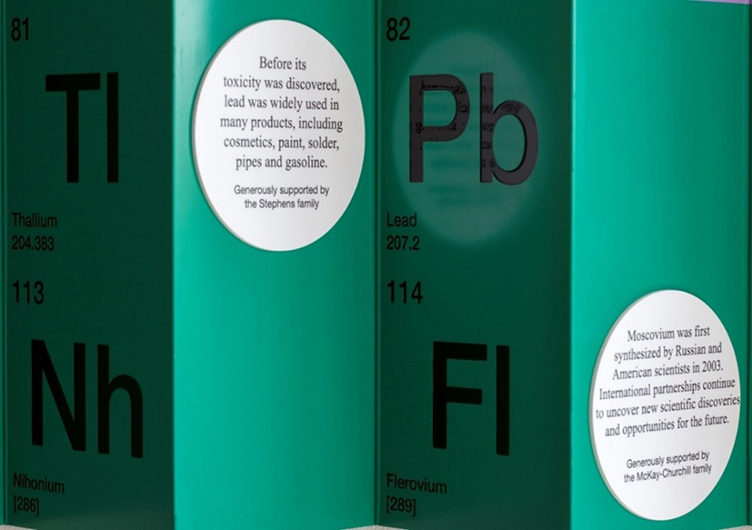 This scientific history is important in the history of scientific knowledge, but why does the Girls Grammar periodic table also include the names of individuals, families, and groups of people important to our own story? The Science Learning Centre was made possible thanks to the contributions of many philanthropic supporters. This support from the School community has been a consistent thread in the development of the School and, rather than display an honour board in the traditional format, it was decided to create a ‘Wall of Thanks’ in the form of the iconic periodic table. Each element includes a short teachable moment, with acknowledgement of the donors who supported that particular element. 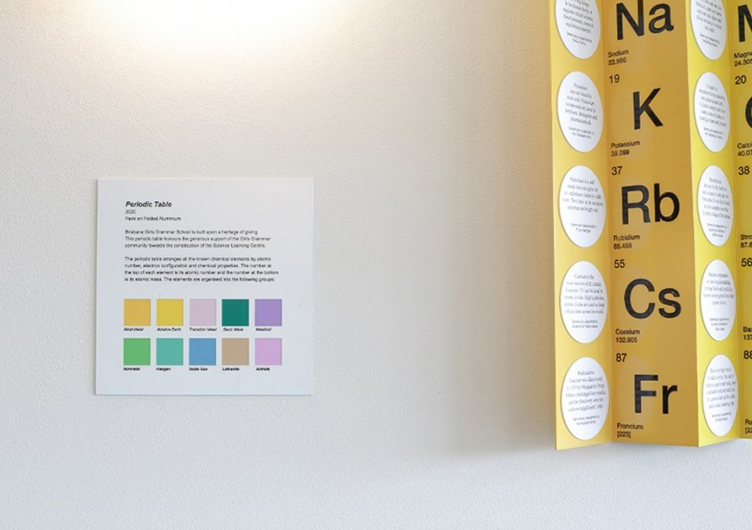 There are many stories behind why each supporter chose ‘their’ element. For some, the element has been integral in their professional or personal life. For others, the element symbolises something of meaning to them. Here are some of their stories:

Oxygen was the very first element in the periodic table Wall of Thanks to be supported by a donor—appropriately an anaesthetist! Oxygen is, of course, vital to cellular respiration.

A past student with a passion for swimming was quick to claim chlorine. In her time at Girls Grammar, she was Swimming Captain, a State Water Polo player, and a House Sports Captain (and her mother was Girls Grammar’s Director of Sport, 2005-2010).

The students of Griffith House chose strontium. First found in rock samples in Scotland, strontium is known for the brilliant red colours its salts give to fireworks—red being the colour for Griffith House.

Curium is named after Marie Curie, a pioneer in understanding radioactivity and the first woman to win a Nobel Prize. Marie Curie was a trailblazer for women in Science and this element was supported by our Principal, Ms Jacinda Euler.

Iron has been integral to human existence from the Iron Age to the Industrial Revolution and, naturally, a family of geologists claimed this element.

Arsenic is of course widely known for its deadly properties. The family who supported this element allowed their Year 8 Grammar girl to choose—and she clearly had a sense of humour!

A proud Grammar Woman, and long-serving past Trustee of the Board, chose gallium as her element. It was discovered in 1875, the same year Brisbane Girls Grammar was founded.

The students of Woolcock House chose tungsten to represent their House. Its chemical symbol, W, is drawn from its other name, wolfram. 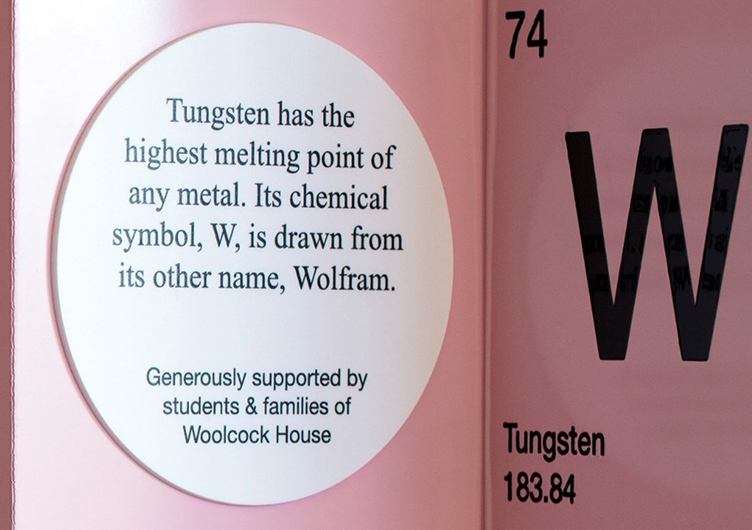 The Science Faculty staff chose scandium, with the chemical symbol, Sc. A rare metal with a high melting point, its existence was predicted by Dmitri Mendeleev himself in 1869. 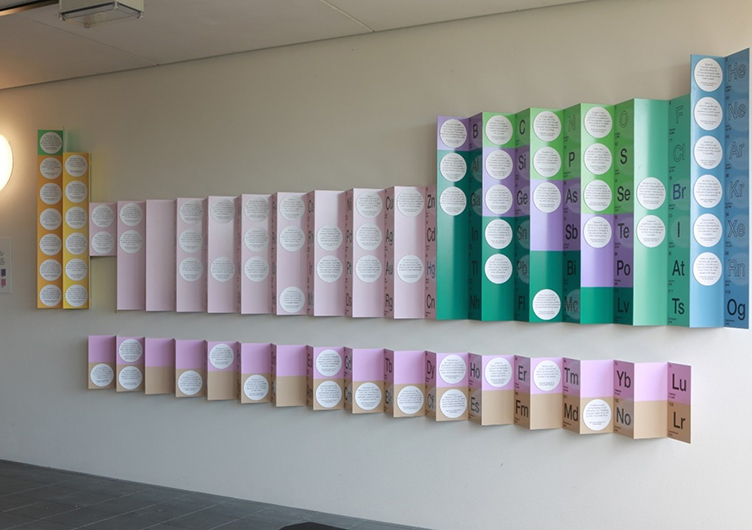 Therefore, the periodic table in the Science Learning Centre is not only a visual representation of millennia of scientific theory, experimentation, and knowledge but also a recognition of the human elements that combine to form the community that is Brisbane Girls Grammar School.

Nothing in life is to be feared, it is only to be understood. Marie Curie

Director of Development and Alumnae Relations