It’s who we are: the School badge and motto

There would not be an object of greater substance than the School badge. There is nothing more reflective of your allegiance to the School than wearing its symbol on your uniform. Unlike their ‘brothers’ at Brisbane Grammar School, every Grammar girl wears this important reminder of where she belongs, and the School’s philosophy, every day, on the centre of her tie. Along with this most prominent identifier of the student’s school is the School motto, a testament to its modus operandi. From where do these vital symbols appear? What is their history?

The School badge and motto: it’s who we are

The badge was designed originally for the certificates of merit and the labels for the book prizes for Brisbane Grammar School’s prize-giving in 1870. The design was entrusted to Mr Gowans of Queen Street and the printing was completed in Brisbane. As stated in the Brisbane Courier Tuesday 1 March 1870:

‘At the head of the engraving is a shield enclosing an open book, with the motto underneath adopted by the TrusteesꟷNil sine labore. The inscription is in Latin, and refers only to the present year. As a work of art, we cannot say much for the shield and its enclosure; but it is probable that the Trustees will be able to issue a “new and improved edition” next year.’

It is believed that the concept of the open book on the shield came from the emblem of Oxford University. The School motto has been attributed to the Roman lyric poet, Horace, from his Second Book of Satires 1.9, where the poet is speaking with ‘the Boor’ who states: ‘Life grants nothing to mortals without a great effort’. Nil sine magno vita labore dedit mortalibus, hence, Nil sine labore—nothing without work.

The aforementioned ‘new and improved edition’ of the badge and motto did not appear. The badge and motto endured and were subsequently adopted by the girls’ school on its establishment in 1875. The badge was identical to the original BGS design displaying a dominant shield with a delicate ‘floating’ ribbon. Initially, it appears that the girls’ prize book covers were not embossed with the crest and were simply labelled Brisbane Grammar School displaying a bookplate inside the cover with no badge and only inscribed with ‘Girls Grammar School’ at the top of the bookplate. Illustrating this labelling are the oldest prize books held in our archive, presented to Millicent Cairncross for English and Mathematics in 1877.

The embossed badge appeared by 1884 and the School archive holds a number of prize books presented to Margaret Kerr for a range of achievements including The Form Prize and Drawing prize; each prize has the badge on both the cover and the bookplate.

The badge as an identifiable uniform embellishment was most likely introduced in the late 19th century. The earliest badge in the BGS collection is Edward Abell’s c1903 badge. Abell’s badge is a handcrafted sterling silver shield with the motto ‘ribbon’ beneath. It is surprisingly close to the current size and detail of the 2022 Girls Grammar badge and does not carry a bar behind and across the shield.

The earliest evidence of a Girls Grammar badge is from an original 1904 postcard written by Marian Morison (1906). Marian drew the Grammar badge and told her friend, Edie, ‘This is our crest and we have little silver ones which we wear as brooches and at the Boys’ School they wear them on their hats’. This description is supported by an image in 1905, where a student can be clearly seen wearing a badge while other students wear a range of jewellery. 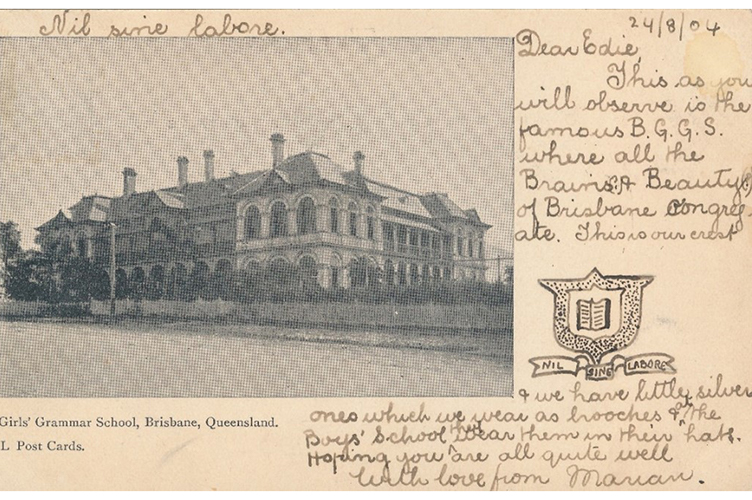 The School badges were handmade in sterling silver by a range of Brisbane jewellers probably including Flavelle, Roberts, and Sankey (est. Brisbane 1892), Hardy Brothers (est. Brisbane 1894), and Wallace Bishop (est 1917). The acceptable badge design seemed to have been both with and without a bar across the shield.

1905. Sepia print 230 x 290 mm. Picture shows a group of girls on one of the steps (west or east side) of the Main Building. It is interesting to note that the student in the second row from the front on the left is wearing a school badge

Many badges have a story to tell and explain why each varies from the norm. A very special badge in the School collection was donated by Patricia Dall (nee Anderson 1943-46). It was fashioned from a two-shilling piece and was made by Mr Steve Grice who beat the coin flat and fashioned a badge with its tips pointed down and the book raised rather than flat. It had no bar as was common for the 1940s badge. At that time, coins were half silver. Coins became half silver in 1921 and lost the remainder of the silver content in 1946. 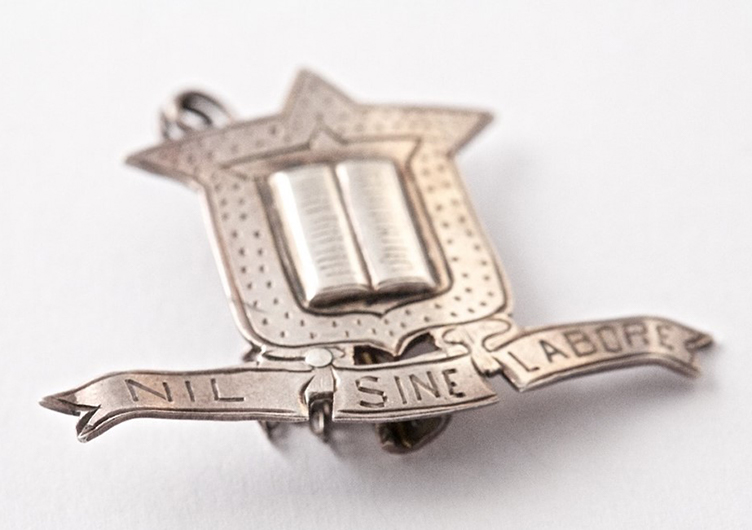 The badge has ‘P Anderson’ engraved into the back and measures 43 x 28 cm. Mr Grice was Dr Dall’s next-door neighbour during the war years and was a jeweller and a musician with the Symphony Orchestra. He made the badge from primitive jewellery tools he had at home. A truly unique badge!

The Girls Grammar badge remained true to its original design with the only variation being the bar which ran horizontally across and behind the middle of the shield. Possibly this was a practical and aesthetic decision with the bar carrying and hiding the pin which secured the badge. When the bar was not included in the design, the pin was rotated to run vertically, as it does today. 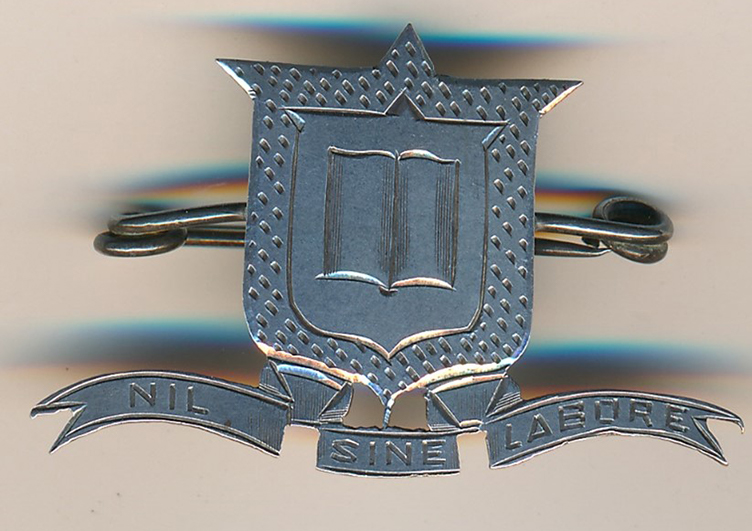 The design of the bar badge seems to have been in place well into the 1960s with the first mass allocation of the current designed badge occurring in 1963. The bar badge can be spotted worn by the occasional late 60s student and these were usually a family heirloom. Mary Kay Campbell (1967) speaks of wearing her mother, Mary Bolger’s (1941), badge for her four years of attendance. 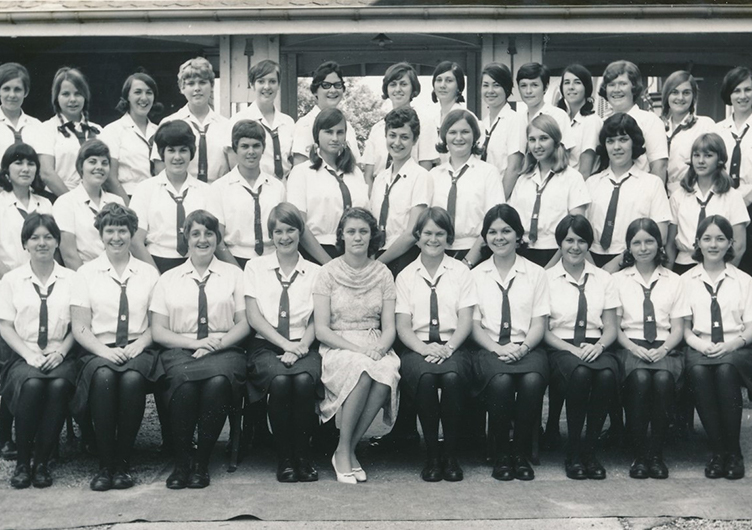 1967 VID. Kay Campbell stands in the second row, second from the right

In 2014, I suggested the creation of a 140th-anniversary badge which copied the original badge with the horizontal bar on which 1875 and 2015 would be engraved on each side of the shield. Principal, Ms Jacinda Euler, and Chair of the Board of Trustees, Ms Elizabeth Jameson, strongly supported the concept and decided to issue every student in 2015 with the celebratory badge. This badge also welcomed the first Year 7 cohort to the School. 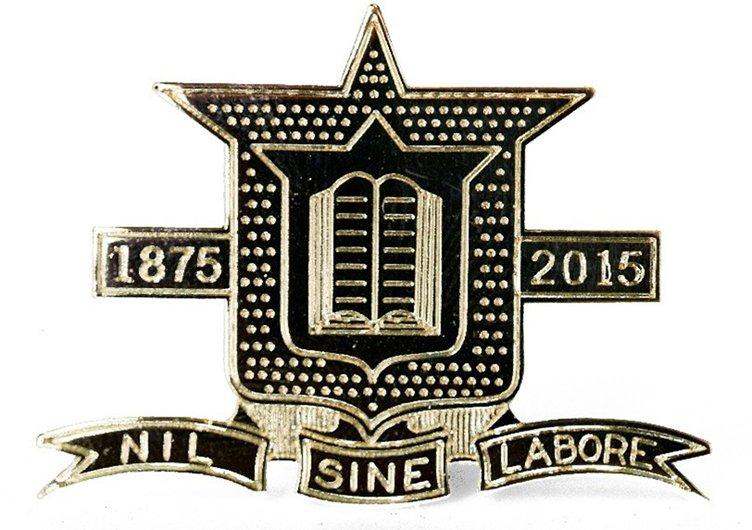 Although the School badge is no longer created from precious metal, what it represents remains just as valuable. The badge and the motto, adopted 147 years ago, preserve the history, traditions, and philosophy of the School. The badge immediately identifies each girl as part of a special community, and she wears this public symbol on behalf of both past and future Girls Grammar generations. 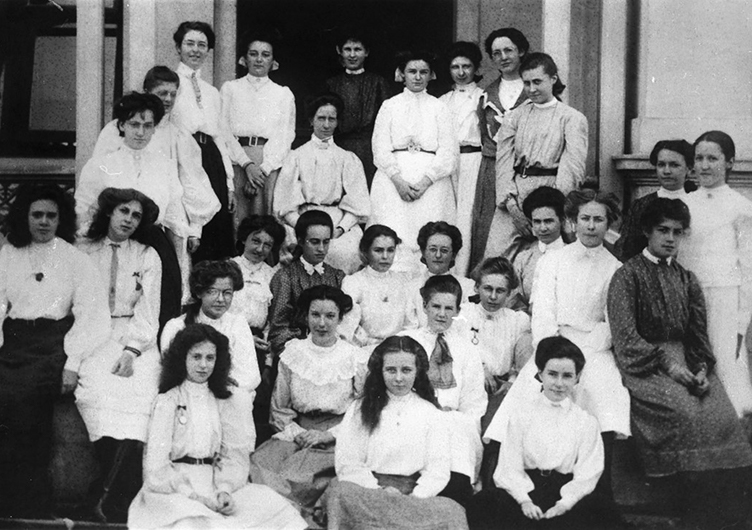 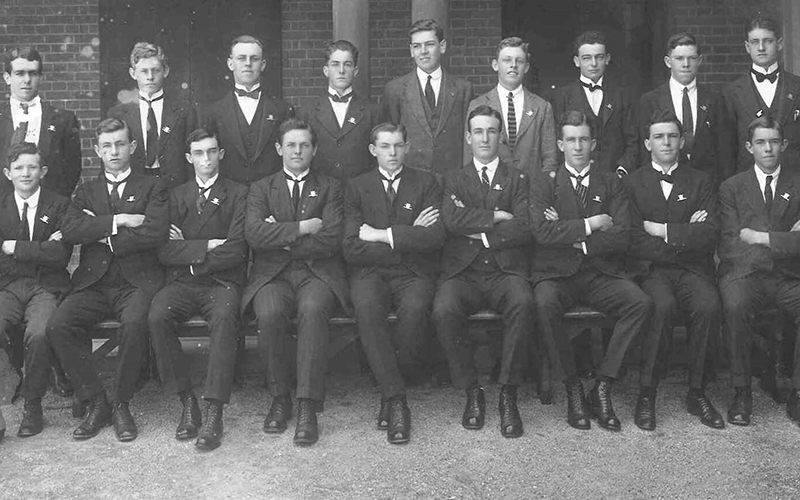 1917 BGS Sixth Form wearing school badges with and without bars