‘In essence, the youth of today have a vision.’ These nine words are the start of an extraordinary document housed in the School’s archives: Manifesto for the New Millennium.

The Manifesto takes the form of a hand-crafted book that incorporates original words, accurate information, and artwork. It was the creation of five 1999 Year 10 History students—Caitlin Goss, Claire Stewart, Erin Laurie, Lauren Steele, and Victoria Downey—under the guidance of their teacher, Ms Julie Hennessey.

Front and back covers of the the Manifesto, and the dedication page

The project had its roots in a national competition organised by UNESCO’s Schools Project network in early 1999. The competition required participating Australian schools to produce a manifesto for the twenty-first century, including an action plan. The first prize was attendance at the first Parliament of the Children in Paris for two students and their teacher, later in the year.

Obverse and reverse sides of the commemorative coin from the Parliament of Children, 21-27 October 1999

The Youth Manifesto Group, as they called themselves, were self-selecting. The only requirement was a commitment to the project, which would be undertaken in out-of-school hours. Every Wednesday afternoon in the early months of 1999, the group would meet for what was later described as ‘long afternoons of laughter, debate, and eating’. It was during these sessions that the Manifesto was born.

The words of the Manifesto are those of Caitlin Goss, who turned up to our third meeting with the statement of belief fully formed. In 356 words, Caitlin encapsulated the hopes, aspirations, and vision of youth around five main themes: peace, culture, freedom, education, and environment.

Pages from the section on culture ‘… Nationality, creed, race or colour cannot be a basis for prejudice. No one should be ashamed or in fear as a result of beliefs they hold…'

With the belief statement in place, the rest of the group turned its hand to illustrating the Manifesto. Eight original artworks were created, along with photoshopped images from the Internet. One of the most evocative original art pieces was Erin Laurie’s massive fig tree, much like the one outside the Elizabeth Jameson Research Learning Centre. Its imposing buttress roots are anchored to the earth while its gnarled trunk and outstretched branches, sprouting new growth, reach out into a Grammar-blue sky. It is an image of strength, endurance, and blue-sky thinking that characterises the Manifesto. 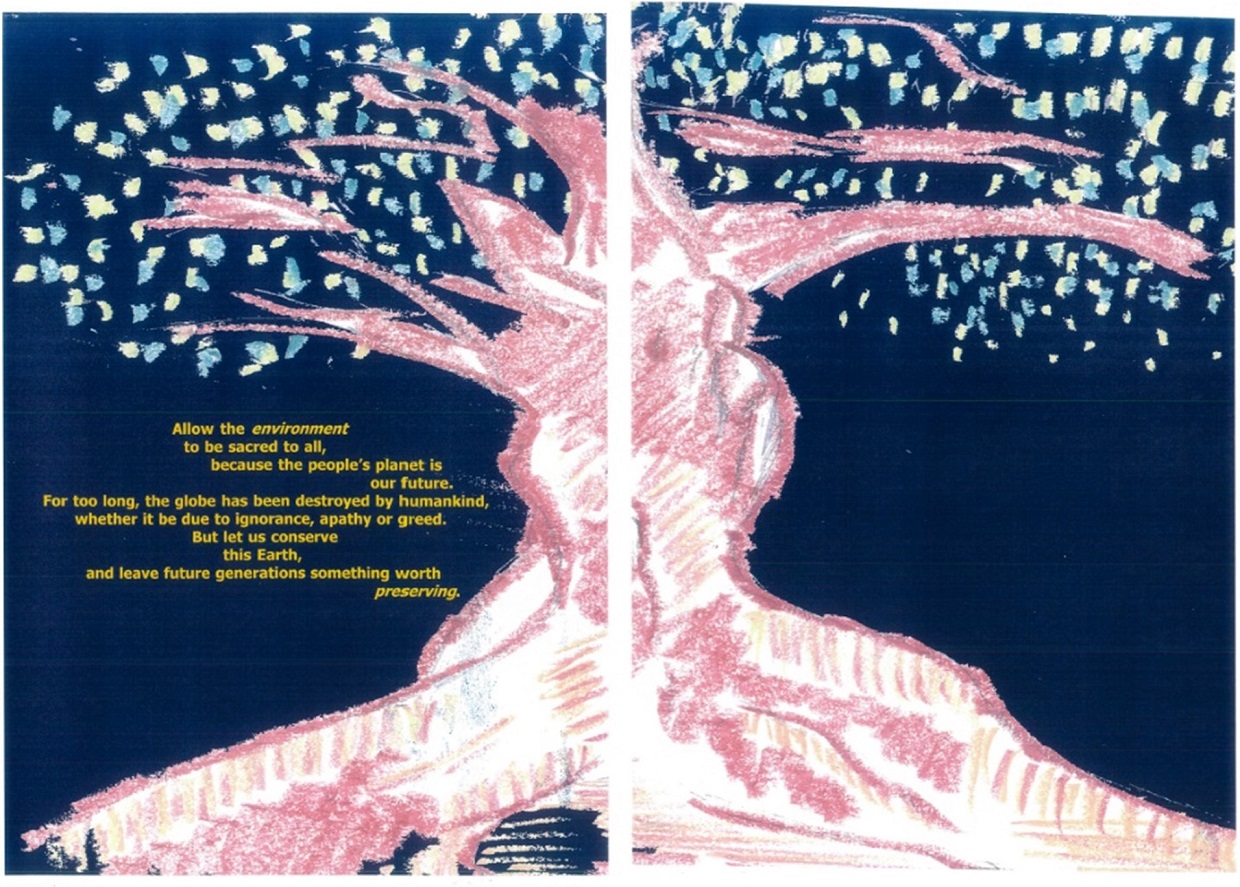 The Manifesto concludes with an Action Plan, which called for the Australian government to acknowledge past wrongs and compensate victims of the Stolen Generations, integrate environmental studies into the compulsory years of schooling, and alleviate developing nations’ debt, and the banning of nuclear weapons.

Our Manifesto was completed in May 1999 and submitted to the national judges.

The news of our win was tinged with both joy and disappointment. UNESCO required a girl and a boy to represent Australia. And so, from 21 to 27 October 1999, Caitlin Goss and Ryan Hall from Bairnsdale Secondary College Victoria, accompanied by Julie Hennessey, represented Australia in the World Parliament of Children, a joint project between the French National Assembly and UNESCO. The Paris conference brought 175 countries and 350 students together to develop a youth manifesto for the twenty-first century. 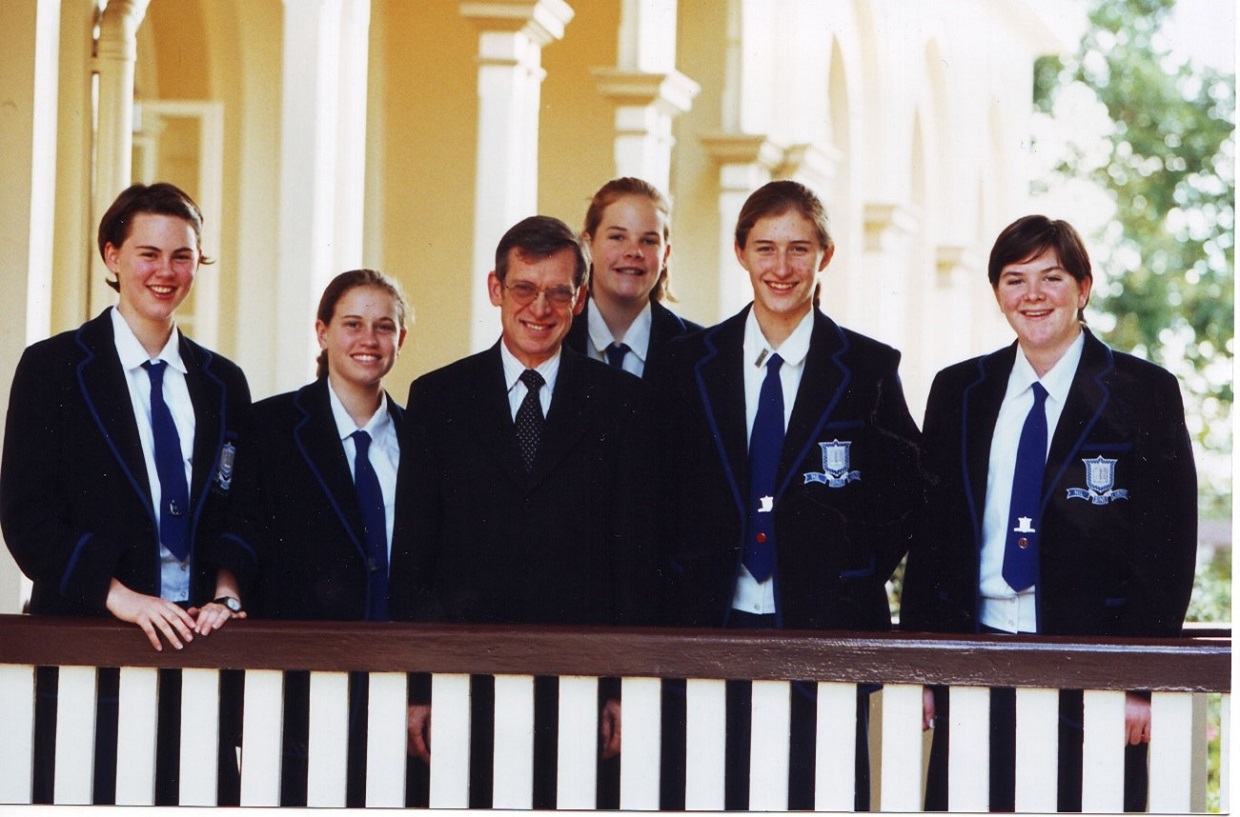 Incredibly, the document was drafted in small side rooms in the Palace of Versailles with lunch served in the Gallery of Great Battles, the largest room in the Palace, some 120 metres long and 13 metres wide. Surrounded by massive works of art depicting 15 centuries of French military successes, including one of Napoleon’s great victories, a sense of irony was not lost on the Australian delegation involved in writing the first section of the Manifesto: Peace and Non-Violence.

The text from Caitlin’s group was adopted for the Peace and Non-Violence section of the Youth Manifesto for the 21st Century in a special sitting in the French National Parliament on 24 October 1999.

We, the young people of the twenty-first century, want that century to be one of peace among nations.

The world’s different civilizations, cultures and religions have a common purpose in the good of humanity and the cause of peace: this is a fundamental philosophy which is to be embodied by all nations… It is imperative that the world strive to attain peace, by diplomacy, dialogue, community campaigns and other viable means. Peace is not only a dream but a goal… (Youth Manifesto for the 21st Century, Section 1 Peace and Non-violence, 1999). 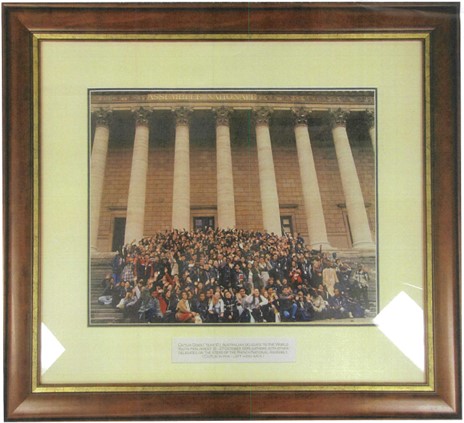 Framed photograph of Caitlin Goss (pink blouse on left) with other world youth delegates in front of the French National Assembly, October 1999

The official Youth Manifesto for the 21st Century, front and back covers and insert of the first section on Peace and Non-violence