On the terraces below the Main Building of the Spring Hill campus, there stands a sandstone monolith. This elegant rock, 1.6 metres tall, nestled in a native garden, is a monument to the staff and students who lost their lives in the Christmas Creek tragedy on 21 April 1979. 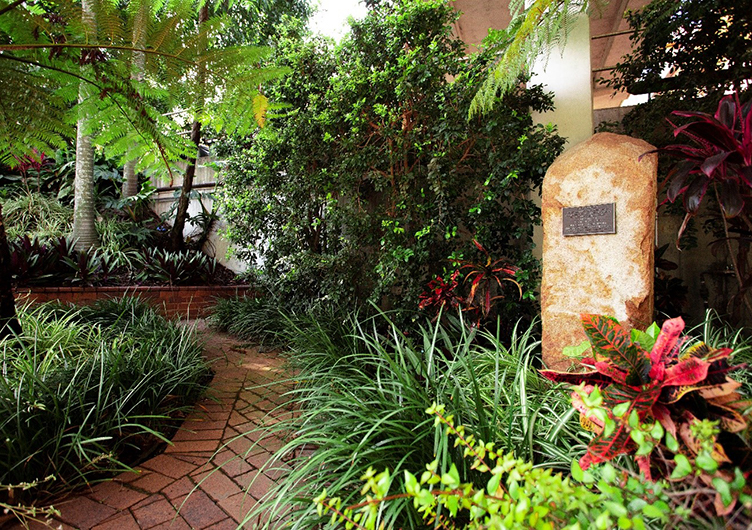 That weekend started with promise and hope but two days later The Sunday Mail was to report an event that had a catastrophic effect on those involved and the School.

‘On Friday 20 April 1979 the School celebrated Easter in a buoyant mood with a service at St John’s Cathedral focusing on the theme, Life out of Death. At the conclusion of the Service, a group of nineteen students and four staff under the leadership of newly-qualified Outdoor Education specialist, John Stamford, set out on an expedition to Christmas Creek, some fifty kilometres south of Beaudesert, in the foothills of the McPherson ranges. They camped for the night and, in the morning, boarded the bus, driven by John, in order to get as close as possible to the beginning of the walking track. At about 8.45 am, nearing their destination, the bus passed through a gate into the property of local farmer, Mr HM Campbell, and John spoke to farm worker and local identity, Harry Gilmore, about the condition of the road. Receiving a reassuring answer, he left a message to be passed on to Mr Campbell: “tell him I will see him tomorrow” (The Sunday Mail 22 April, 1979).

‘The bus proceeded slowly for about fifteen minutes, according to the Inquest held on 22 September 1979, negotiated a left-hand curve in the road, and then proceeded down a slight grade at a slow speed. It moved over the edge of the roadway to avoid a spoon drain when the earth under the passenger’s side outside the rear wheel gave way causing the bus to leave the roadway, roll over a downhill slope several times and ultimately come to rest on the banks of Christmas Creek approximately 150 feet [approximately 45 m] from the roadway. No blame was apportioned, and the accident was ruled as an act of God’ (unpublished text by Alan Dale p1).

Staff member, John Stamford, his wife, Janelle, and two Year 10 students, Helen Gahan and Jillian Staines, were killed instantly, while dazed and injured girls were scattered down the hillside.

The impact this loss of life and injury had on the families of the students and adults involved, the Principal, the School Trustees and staff, and the general School community was dreadful. Individual recovery was prolonged and painful; however, resilience and strength emerged as tangible outcomes.

The relatively newly-established Fathers Group, under the leadership of Mr Patrick Hickey, responded immediately with a meeting the following week and submitted a letter to the Trustees with their thoughts about a way forward. Included in this correspondence were suggestions of memorial scholarships or bursaries, memorial prizes, a drinking fountain, the purchase of land for use as a dedicated camp or field station, and a memorial garden—‘a dedicated quiet area with shade, garden, and seating.’ The Trustees had a range of possibilities to consider in the wake of this tragedy to determine what the next step should be. Therefore, the Fathers Group decided, as an initial project, to focus on establishing a memorial garden on the Spring Hill campus.

The fathers, under the watchful eye of Fathers Group chair, Pat Hickey, designed and landscaped the area on the terraces near the heart of the School, resulting in a beautiful stone standing solid and elegantly on the Grammar terrace. 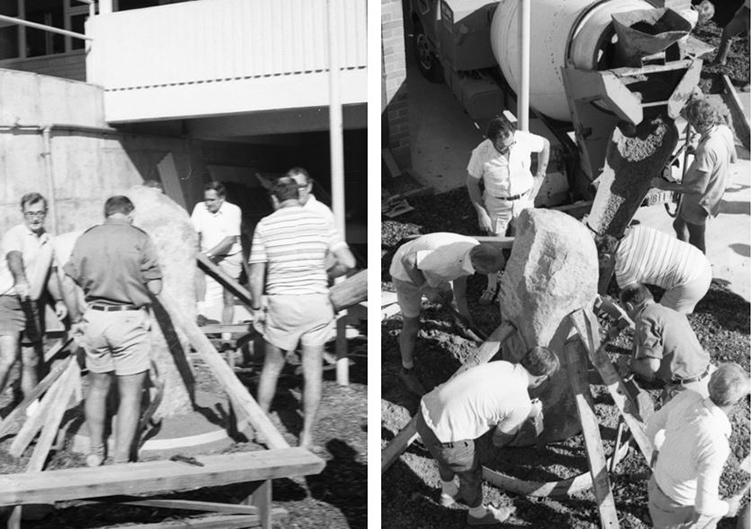 The stone placement on terraces July 1979

The monolith was cemented into place on the terrace at the then Auditorium level in June/July and reported on in the July Parents and Friends newsletter. On School Day, 22 September 1979, the official dedication of the memorial garden took place along with the opening of the new multi-purpose building which incorporated the Lilley Building and Beanland Library. The official visitor to the School, the Governor, Sir James Ramsay, opened the area. Lady Ramsay, who accompanied her husband, had the honour of planting the tree ferns which continue to thrive in this setting. The area was then blessed by the Reverend Ian George, Dean of Brisbane. On the monolith the plaque reads: 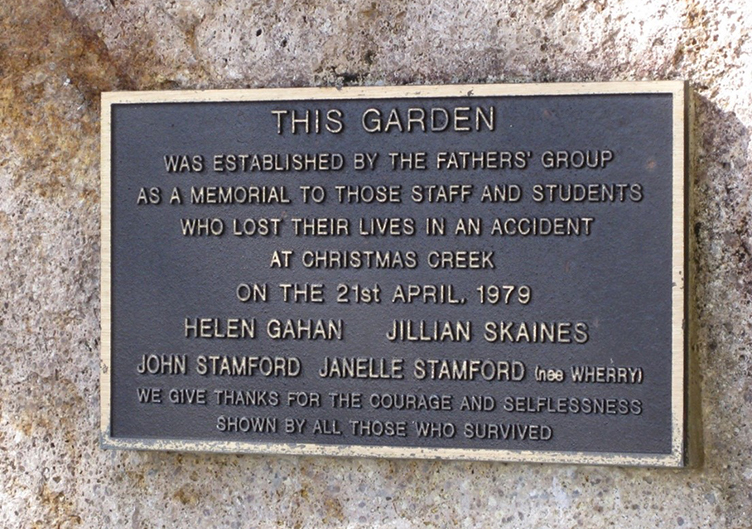 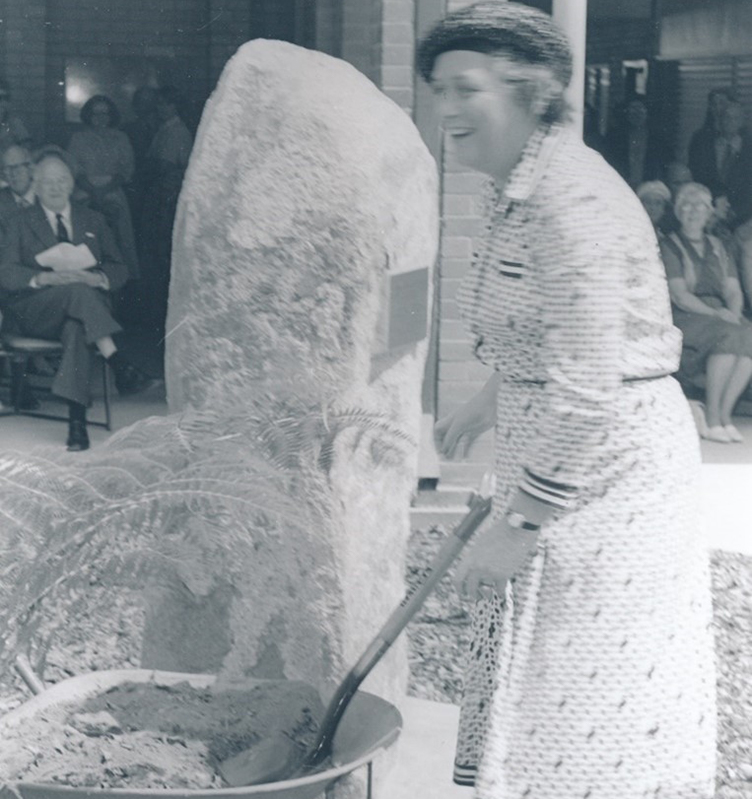 Commemorating this area and educating each Grammar generation has taken different forms across the four decades. The ANZAC Day and Christmas Creek Assembly is observed every year, but the emphasis of the address alternates between an ANZAC theme and the Christmas Creek tragedy. In recent years, the Student Council has also suggested ways to acknowledge this momentous event in Grammar’s history. Various wreaths have been placed on the stone after the Assembly ranging from native flowers to ribbons of House colours interspersed with royal blue (2016), all with the intent of drawing the new generations’ attention to this significant watershed in the School’s history. In 2015, the Student Council handed out rose petals to the students as they left Assembly and then proceeded to the memorial to scatter these delicate petals as their tribute. 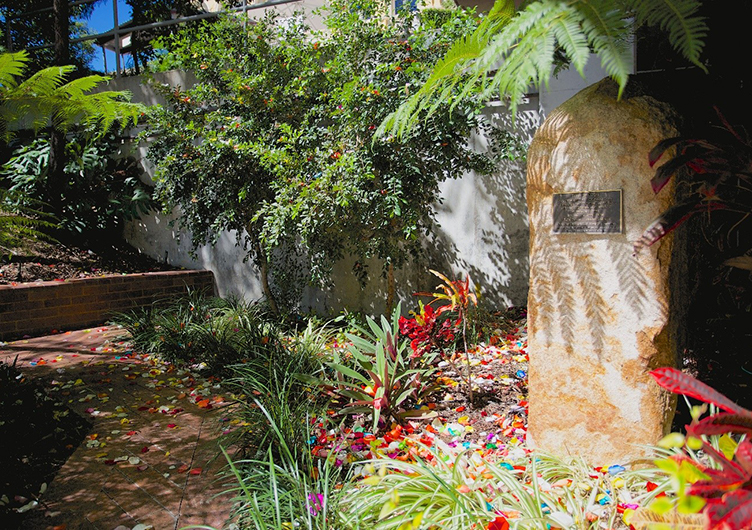 The garden has grown into a green and calm oasis and the position on a central terrace that links sides of the campus is appropriate. Decades of Grammar girls have walked past and noted this stone with its plaque for more than 40 years. Sometimes it is passed unnoticed, but on other occasions, its significance and impact on Girls Grammar education is understood and the impact of such a pivotal event strikes home.

Dale, Alan Unpublished chapter on BGGS history The Tragedy at Christmas Creek: The Development of the Memorial Outdoor Education Centre. 1999.