The Swim Coat: A Relic of a Bygone Era

By 1875, swimming for women and girls was a more acceptable activity and, while women were still restricted by excessive layers of clothing, segregated swimming times allowed for greater freedom in both attire and activity. Thus, experiences provided for girls and young women widened.

This held true for Girls Grammar; however, one significant event became the catalyst for incorporating swimming into the School’s curriculum. This was the sinking of the RMS Quetta, a three-decked steamer bound for England on 28 February 1890. The BGGS community was directly affected by this tragedy as past students Anne and Isabel Wight (1881 and 1878) were on board the sinking ship. As a result of the tragedy, Sir Charles Lilley donated prizes for competitive swimming and the minting of the Wight Memorial Medal for Music.

Photographs of the swimming and lifesaving teams for the School Magazine were typically taken in school uniform. However, in 1939, both Brockway Cup (swimming) and McWhirter Cup (lifesaving) teams were photographed together in swimming coats and caps. It was perhaps not the most attractive look but, at least, modesty was preserved. The coats worn were issued to girls for the QGSSSA competition only, and then returned to the School. 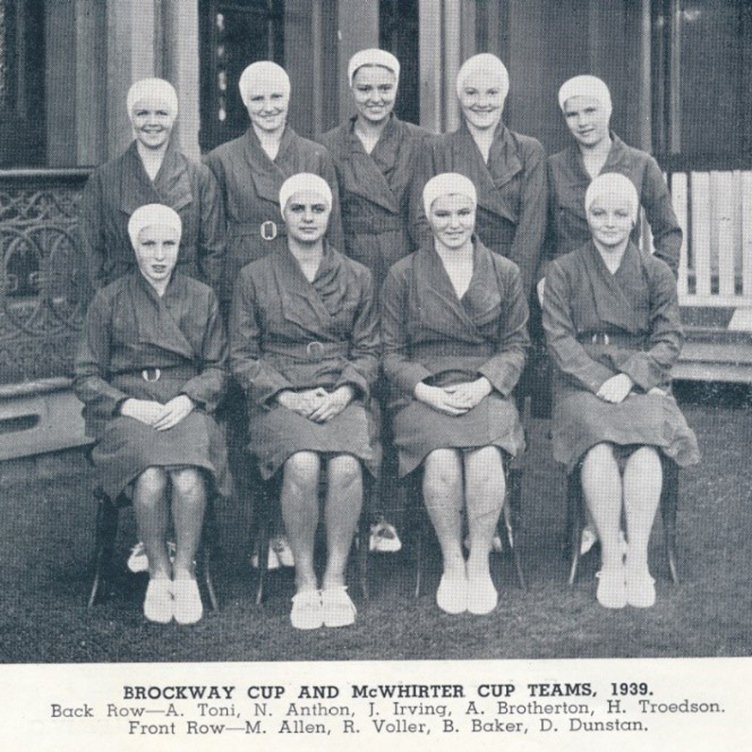 When reflecting on wearing the BGGS swim coat, Margaret McNamara (Hislop, 1948) remembers marching into the Valley Pool wearing the ‘royal blue dressing gowns’. She described the coat as wool flannel, to the knee and as being ‘a bit moth-eaten’. Not only did these coats provide protection for the girls’ modesty, but McNamara alluded to its function as a uniform and subsequently, the pride in representing your school by wearing the coat. The program for the early swimming competitions included diving. The time lapses bewteen each dive made the coats most useful in providing protection on wet Brisbane days in March.

By 1953, the School struggled to keep the original swim coats in good repair. At the Sports Club meeting held on 6 December 1954, Swimming Captain, Ada Ball (1954), ‘suggested new coats should be bought for the whole of the swimming team as the coats now used are very shabby and there are only enough to supply half the team with them. The rest wear blazers.’[1] This may also partly explain why cutting the coats to a shorter length was not simply a fashion statement but a necessity, as well why there were girls in  blazers in this 1953 photograph. 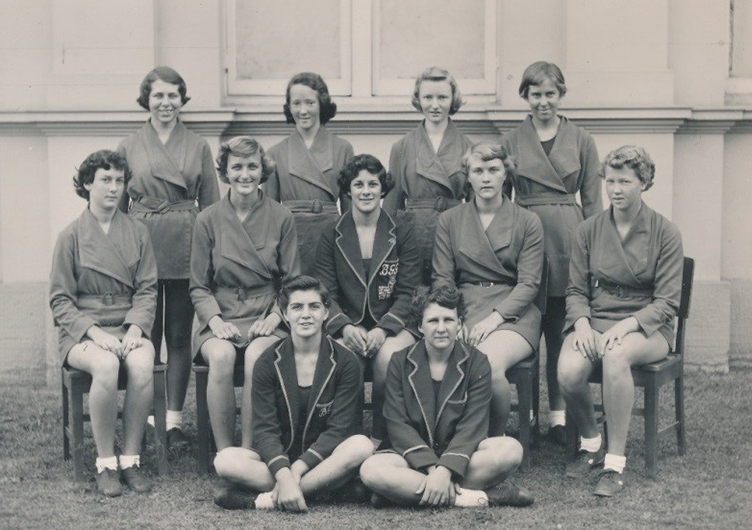 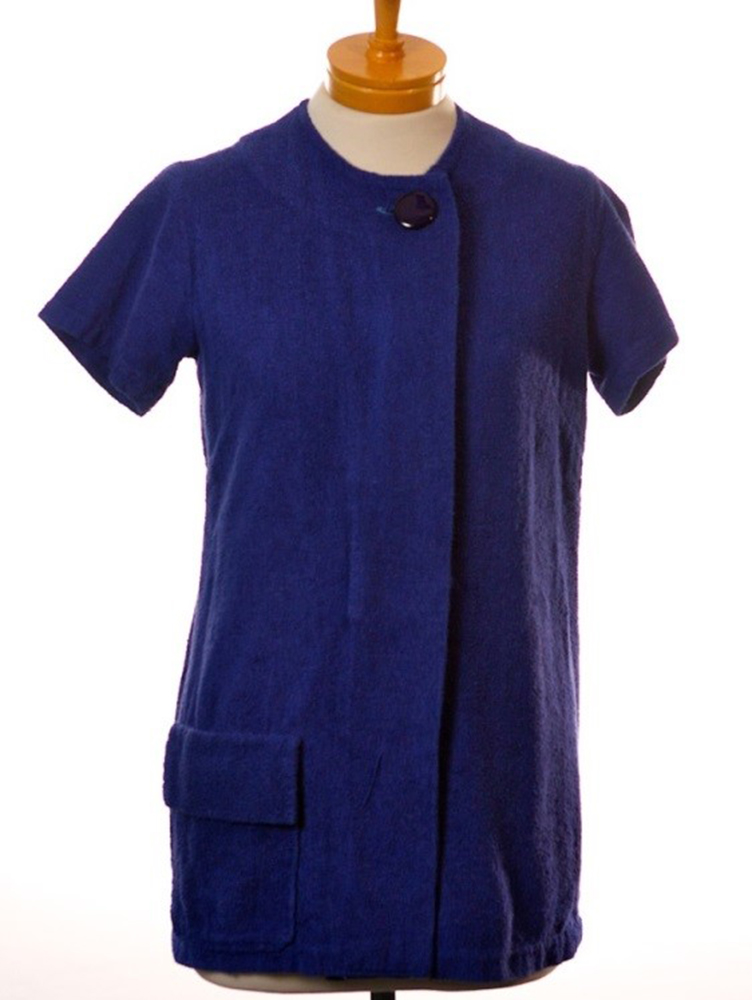 Influenced by the fashion of the day, the new royal blue, terry towelling short swim coat was introduced in 1965/1966. The swim coat continued to be worn until 1973. Then Swimming Captain, Anne Belcher (1973), clearly remembers the coat and the march past ritual while carrying the white, School-issued towels embroidered with BGGS on the corner in royal blue.

As the royal blue Girls Grammar swim coat and the team march past faded into memory, the short, royal blue coats were traded for Physical Education uniforms, swim T-shirts and blazers. However, to Girls Grammar athletes representing their School and proud of their interschool selection, whatever BGGS blue uniform they wore was a hard-won badge of commitment and honour. 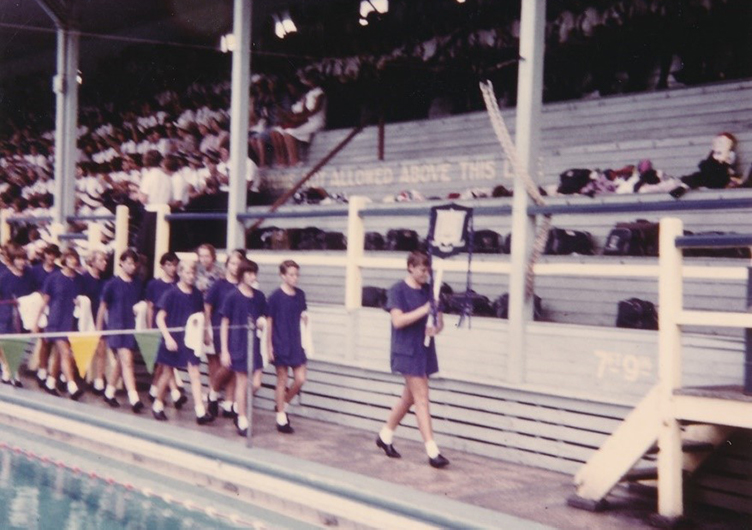 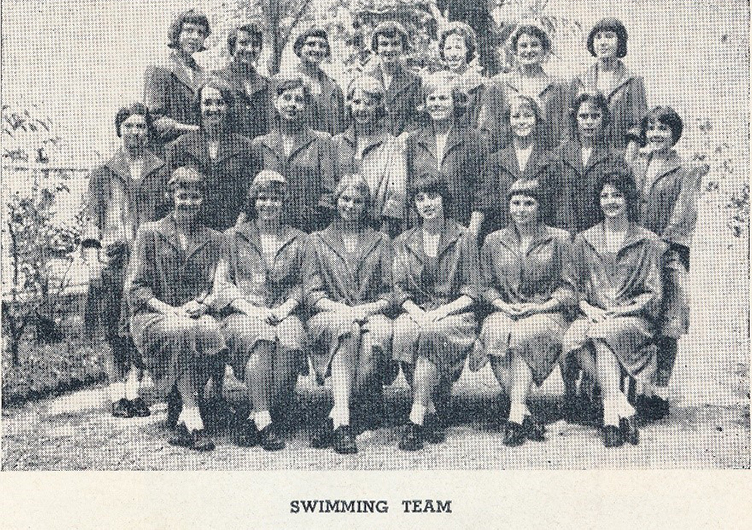 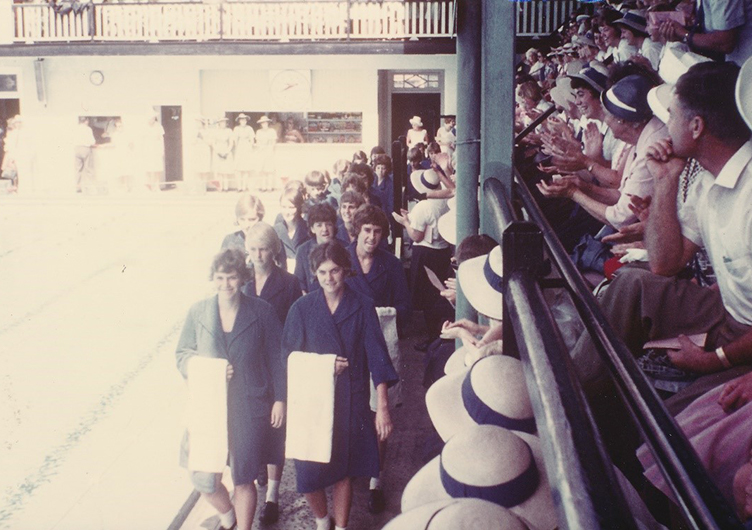