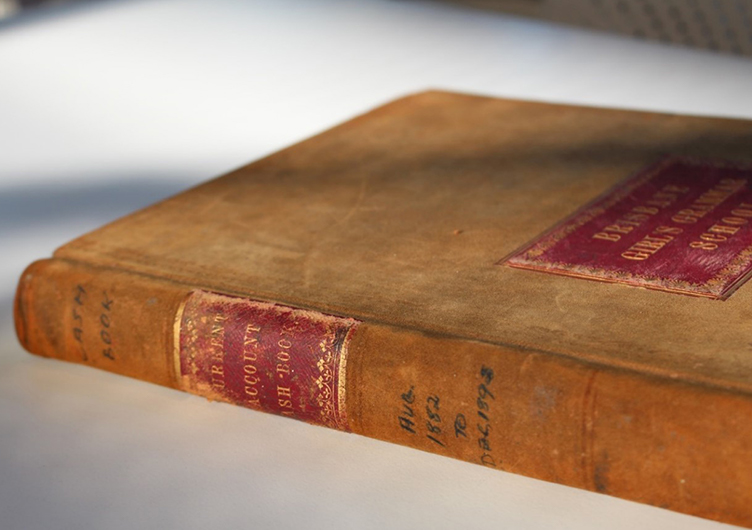 The Girls Grammar archive holds many items that may not appear to be striking or important to the untrained eye. However, with just a little sleuthing, information that unpacks the intricacies and forgotten stories of the history of the School comes to light. One such item is an old cash book. It does not look exciting from its worn exterior but, once opened, its meticulous copperplate hand-written entries reveal fascinating stories that few people know and illuminate who we are. 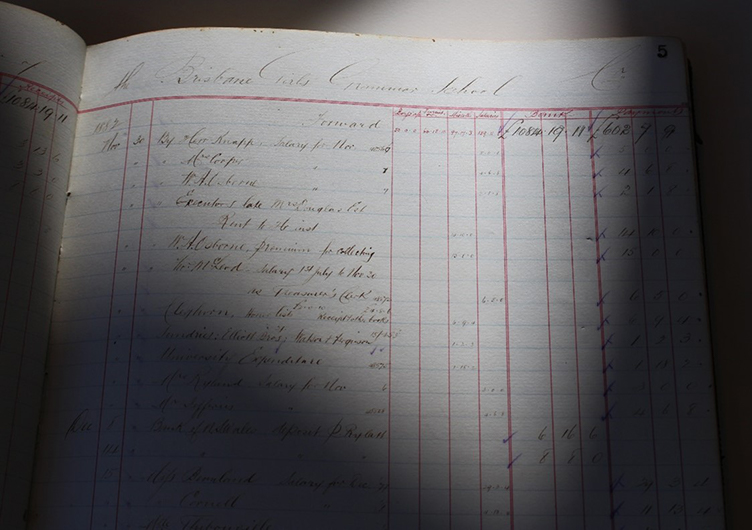 In this 1882 – 1892 ledger, entries document the accounts of the School and it includes the names and actions of those who were integral to the history of Girls Grammar. Many of these figures were men who would play significant roles. And why does the year 1882 and the involvement of these men have significance? It is because they became our inaugural Trustees as, on 21 July 1882, the Board of Brisbane Girls Grammar School was formed. Basic arithmetic reveals that 2022 is the 140th birthday of our Board of Trustees. This may seem like a lovely anniversary to celebrate, but what makes this detail so fascinating? We asked ourselves, why, if the School is 147 years old this year, is the School’s Board seven years younger? That deserved some detective work. 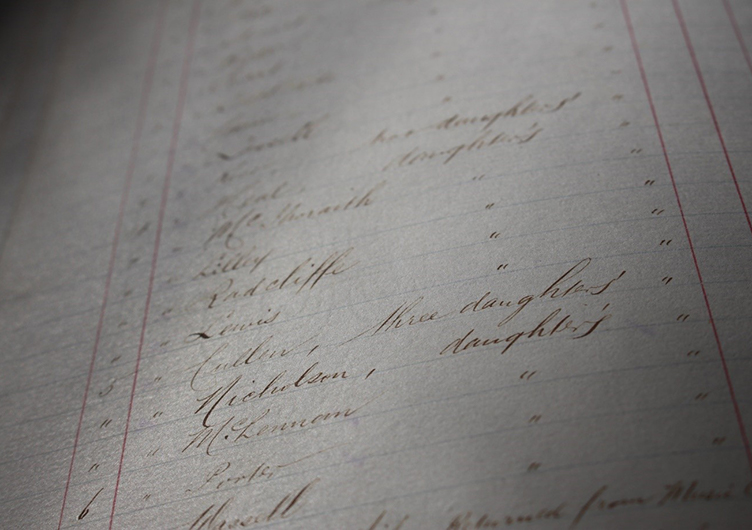 In 1875, Girls Grammar started as a branch of Brisbane Grammar as an ‘experiment’ and was overseen by the Brisbane Grammar Board. However, this soon proved to be more than an experiment, as the girls’ branch grew quickly from its initial 37 pupils to 70 students only six years later. The girls’ branch had become one of the most popular schools for girls in the Australian colonies and the Brisbane Grammar Trustees realised that considering this increasing demand for the girls of the colony to have the same educational opportunities as their brothers, the girls’ school should be placed on a ‘separate foundation’.

Until this point, there were two separate branches managed by one body of Trustees. If the girls’ branch were to attain autonomy, it was surely time to break free from the shadow of the boys’ school and elect its own Board of Trustees. This new Board could then manage a truly independent school, offering an educational foundation for young women to ‘contribute confidently to the world’. To accomplish this separate status, and under the Grammar Schools Act of 1864, once 2000 pounds had been raised by subscribers, the Government would then give a 4000-pound grant as an endowment to the building fund, plus an annual endowment of 1000 pounds. This would give the new school for girls a solid financial basis.

On the afternoon of Wednesday 28 June 1882, at a meeting held in the Town Hall, three Trustees were elected to the Board of the newly independent girls’ school by subscribers. This independence had been attained because the School had deposited the required two thousand pounds in the Union Bank. This was sufficient funds for both a building for the new school and the election of a new Board of Trustees to manage the fledgling institution. Electing these three Trustees, under the Grammar Schools Act, was the first step of the incorporation of the institution and, at the next Board meeting, the remainder of the required trustees would be elected on behalf of the Executive, making in all, seven Girls Grammar Trustees. 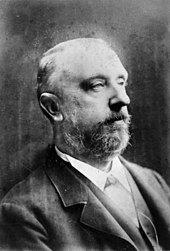 At the Town Hall meeting, Mr James R Dickson, a subscriber and a forward-thinking gentleman whose seven daughters[i] all attended Girls Grammar, said that he had spoken to a number of subscribers who felt that ‘fresh blood should be introduced’. He thought that, if the two schools were managed by the same Trustees, the interest of one school would be subordinated to the interest of the other. But the Chief Justice, Sir Charles Lilley, advised that it might at first be detrimental to the girls’ school if it was completely separated. However, if the subscribers agreed, they should work together until the new School building had been erected and the new body of Trustees had ‘got properly at work’ (‘Girls’ Grammar School’, 29 June 1882, Telegraph, p. 2). Thus, he recommended that the subscribers leave the new Board in the hands of the old Trustees for three years, the period for which they would be elected, as he believed this plan would promote the best interests of the girls’ school. At this meeting, Sir Charles Lilley, Sir Samuel Walker Griffith, and Mr Lewis A Bernays were voted onto the new Board by the subscribers.

On Friday 21 July 1882, the old, combined Board of Trustees had their last meeting. Here, Lilley was voted Chairman of the Board of the new girls’ school, Griffith as Vice-Chair, and Mr John Scott MLA, Treasurer. At this meeting, Lilley reported that the Governor of Queensland, under provision of The Grammar Schools Act of 1860, had appointed four current members of the Brisbane Grammar Board to complete the new Board.

It is an interesting turn of events that, three years later, when the next Board was to be elected, the Trustees did not follow the original suggestion to select a new Board for the girls’ School. The ‘old guard’ did not seem to want to let go. No ‘fresh blood’ was introduced as Dickson was unfortunately too pre-occupied at the time with the job of Colonial Treasurer to object. The core of the ‘Old Guard’ of Trustees, with their association to BGS, was re-elected and continued for more than 80 years.

There was no clean break; the separation of the Boards was gradual, and it was not until the 1960s that the change suggested by Charles Lilley in 1882, was introduced. In 1965, four of the newly elected Girls Grammar Board members were also not members on the BGS Board. The shift continued when, in 1968, Yvonne Bain (West, 1945), became the first woman on the Board and, in mid-1969, Konrad Hirschfeld, Judge G Seaman and Harry TF Bolton, all resigned from the BGS Board.  This meant that, finally, no Girls Grammar Trustee was directly connected to the Brisbane Grammar Board and two separate Boards finally operated. Hirschfeld and Seaman continued on the Girls Grammar Board until 1976 and Bolton until 1981 when, on his retirement, ‘fresh blood’ could truly be introduced as Trustees at Girls Grammar. 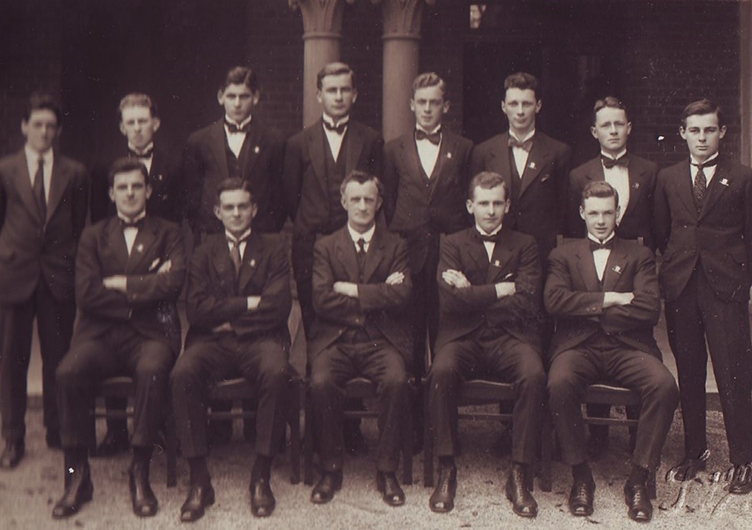 In the following decades, ‘fresh blood’ had taken on further meaning. The last three Chairs of the Board have been women who, like Yvonne Bain, are ‘old girls’: Cherrell Hirst (1963); Elizabeth Jameson (1982); and Julie McKay (2000). Also, the ratio of men to women has shifted dramatically from the 1960s, with the current Board being 50/50. This gender balance and the ensuing divergent approaches and skill sets reflect more than simply a commitment to girls’ education. This mixture has led and supported the School from 1882 to the 21st century.

Every Girls Grammar family has ‘entrusted’ these individuals with the education of their daughters and these women and men have volunteered their expertise and time unselfishly for the benefit of each girl. Perhaps even more significant is the fact that many of these dedicated individuals have believed so strongly in the philosophy of the School that they, from those very first Trustees, believed the School would provide the best education for their daughters, a fact verified by those entries in that early ledger.

Happy 140th birthday to our Board of Trustees and thank you.