We Have a School Magazine—Not a Yearbook 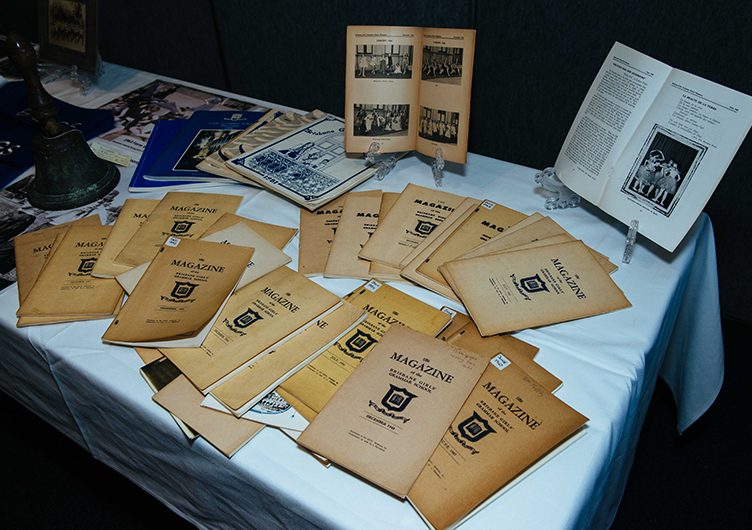 Acknowledgement and celebration of the student voice have always been a feature of Girls Grammar, and the number of publications in which that voice rings clear attests to its significance. Brisbane Girls Grammar School was established with the intent of providing an educational foundation for young women to contribute confidently to their world with wisdom, imagination and integrity. One aspect of this is that girls leave the School having experienced genuine chances to speak out, challenge the status quo, express their ideas and create discussion.

In 2021, students have the opportunity to speak in front of an audience of more than 1400 at School assemblies and can participate in student-led initiatives through the Student Council, co-curricular groups and activities, and House meetings. Evidence that student voice has always been heard is in the early instigation of a magazine that showcased Grammar girls’ lives through writings and artistic efforts of the student body.

Girls Grammar’s first School Magazine was published in 1913—before World War I. This inaugural publication may seem humble by modern standards, but closer examination of its contents attests to its historical importance. 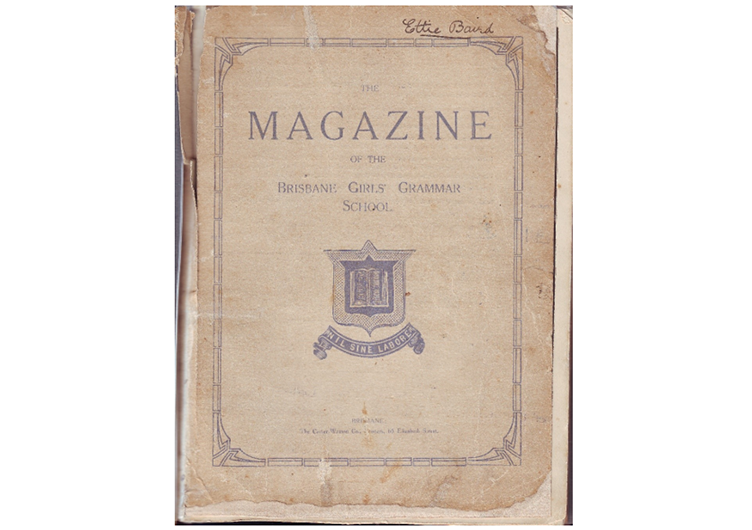 The School’s archives hold an original copy donated to BGGS, which is inscribed with the name Ettie Baird. The crest on the front looks, to modern eyes, more like Brisbane Grammar School’s crest, but the contents are all about Grammar girls. The first six pages are advertisements, and this section did not re-appear until 1933. Perhaps the most pertinent advertisement for the School is that for a Miss Dorothy Brockway (1901), a past student and ‘teacher of physical culture and of swimming’, promoting lessons at her ‘private gymnasium and swimming bath’ on Wickham Terrace. After studying in England, Miss Brockway returned to Grammar as a Physical Education teacher, establishing a comprehensive and professional Health and Physical Education platform. 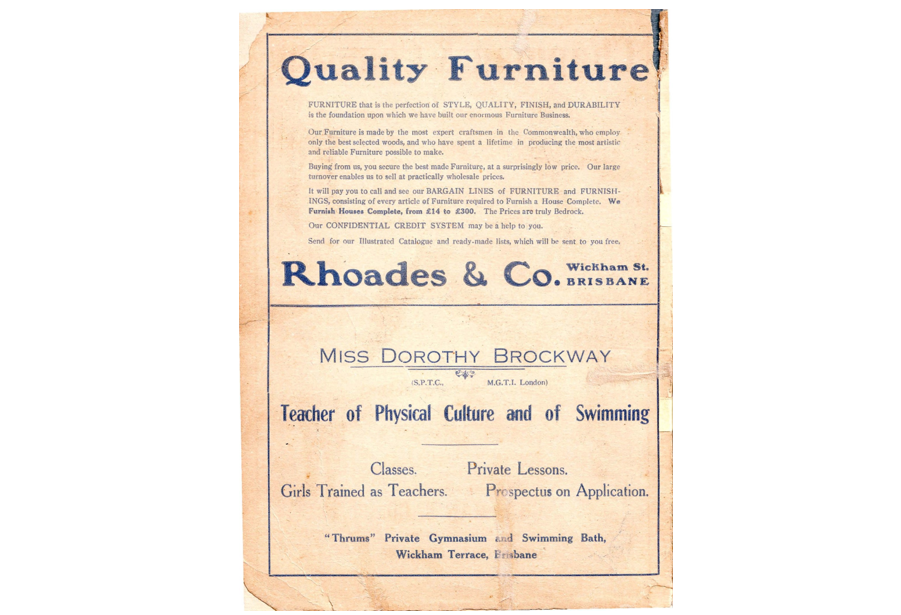 The first page of the magazine is rather official with the Head Mistress’ name and reads like a prospectus. It outlines the curriculum on offer and details that students will be ‘received in the lower school from the age of eight years, provided that they can read, write legibly from dictation and work examples in the four simple rules’. The subjects studied included English, the Classics, Languages, Mathematics, Science, Physical Activities, and the Arts. However, the most intriguing offerings were in the lower school, which added Needle Work, Brush Work, Elocution and Morris Dancing—a form of English folk dance.

The remainder of the magazine captures the voice of students, both past and present. Grammar women wrote of life after school and at university as if to say, ‘come and join us’, while current students wrote about the School’s curricular and co-curricular offerings.

The writing was amazingly honest:

The magazine also published an amusing but positive review of the Fourth Form concert, the 1912 University of Queensland and senior public examination results, hospital notes—not about patients but service by Grammar girls who donated one penny a week to the Children’s Hospital, ‘Notes’ for the year by every form, original writing, and boarders’ notes.

While the magazine is now a much larger publication, it continues to be an avenue for student voice. I wonder what the readers of 2121 will learn, or find quaint, from this year’s version. Let us hope it will still be a rich source of student life reports with a plethora of photographs with girls clearly identified.