When is a house not a building? When a ‘House’ is part of the structure of a school

The House system is, historically, a traditional feature of education in England from medieval times when students actually lived in separate residences. So, why would Girls Grammar in Brisbane in 1964, decide to introduce a House system?

Perhaps it was because 1964 was a ‘double intake’ year when, for the first time, Year 8s arrived from primary school to become secondary students along with Year 9s (I was one of the Year 9s). An obvious sign of this growing school population was that morning assemblies could no longer be held in, what is now called the Annie Mackay Room, as numbers were too large. Perhaps, dividing the school population into sub-units was a way to create more intimate, cross-year groupings.

Headmistress, Mrs Louise McDonald, explained the rationale in her report to the Trustees in February 1964:

‘Due to the large number of Forms (22), it was decided to have school competitions between Houses which have now been organised. Each House has approximately equal numbers of all Forms and two staff members. We have chosen the names of five former Chairmen of Trustees and five former Headmistresses as House names. Each House will have a Prefect as Captain. I feel this system will give more Senior Girls an opportunity to take responsibility and leadership.’

The initial 10 Houses created in 1964 were England (gold), Gibson (purple), Griffith (brown), Lilley (pale green), Woolcock (maroon), named after former Trustees, and the five named after former Headmistresses; Beanland (pink), Mackay (Saxe blue), Mackinlay (red), O’Connor (mauve), and Wilkinson (bottle green). I was grateful my House colour was a lovely blue, and I think that the first Griffith girls may not have felt themselves so lucky. In 1964, rather amateurish Dymo label badges were the way to proclaim your loyalty. 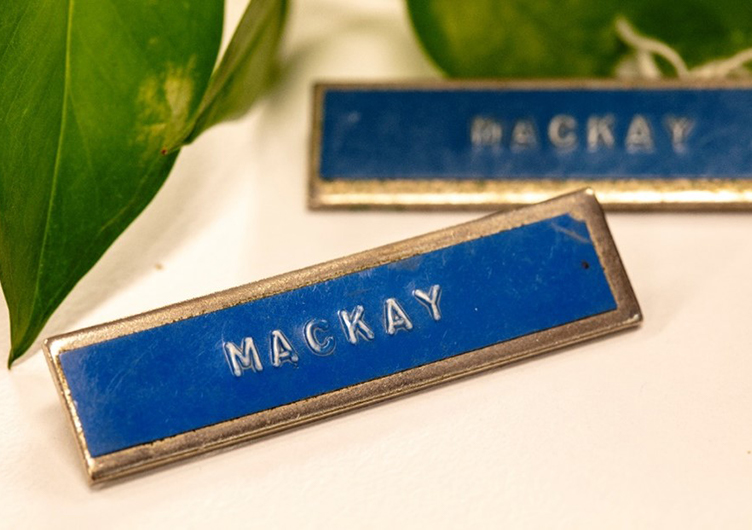 It was soon decided that the 10 Houses were too small and, in 1966, they were amalgamated into five. A ‘Trustee’ House was merged with a ‘Headmistress’ House and, for what seems to me a strange decision, the names of the men were kept, albeit with the colour of the other House. Therefore, I became an England girl, keeping the light blue colour. The other amalgamations were: Griffith (Mackinlay) red; Lilley (Beanland) green; Gibson (Wilkinson) purple; and Woolcock (O’Connor) yellow. The familiar circular, House-coloured badges arrived by 1965 and more Houses using Headmistresses’ names appeared as the School population grew: in 1990, O’Connor (maroon); in 1994, Beanland (pink, its original colour); and, in 1998, Mackay (white). 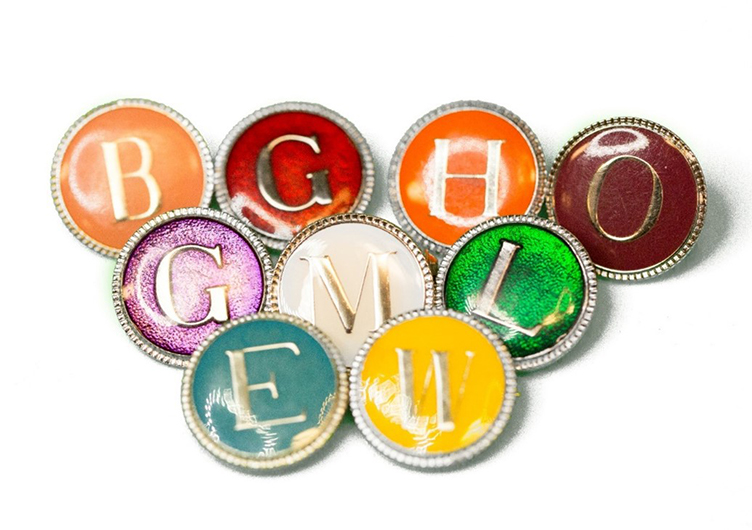 Throughout the years, the House badge has been worn in different places—on the top pocket, on the collar, and now on the tie. 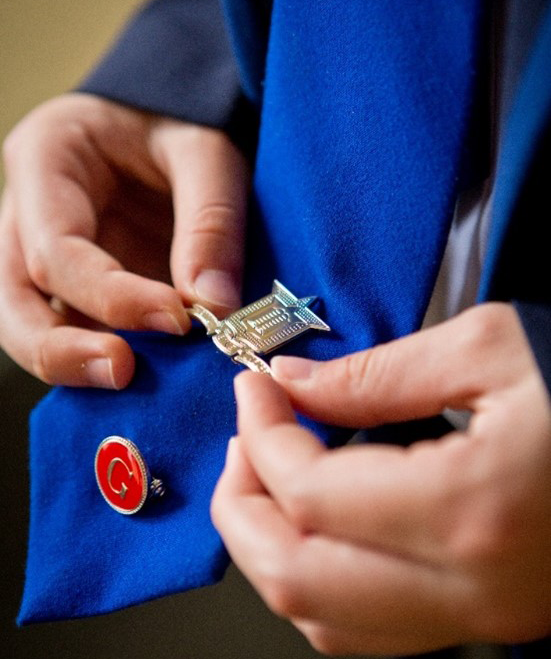 2015 With the House badge where it is now worn

The most recent development in the history of House badges occurred in 2014. Associate Dean, Mrs Pauline Harvey-Short, believed that the important role of House Captain deserved special—and perhaps more public—recognition. Approval of this innovation in 2012 allowed her the opportunity to create a fitting blend of two traditional badges. A smaller version of the School badge was suspended from a rectangular bar reminiscent of the 1964 house badge version, but the particular house colour and the role were made obvious. 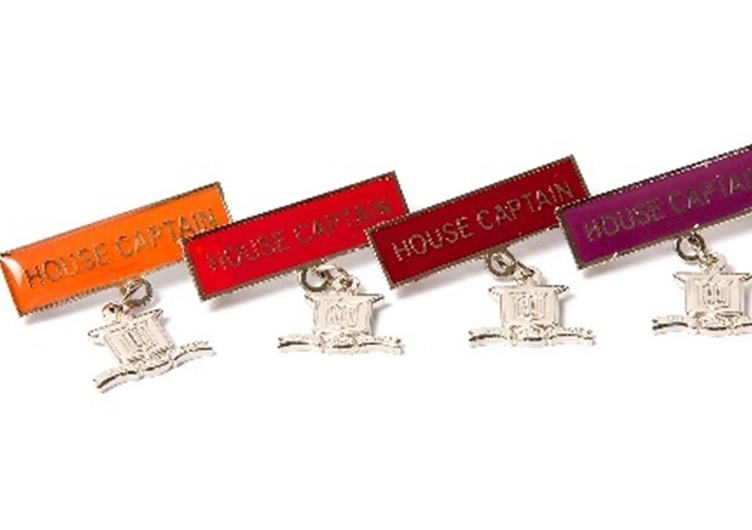 A selection of House Captain badges

The small badge was inspired by the ‘dress badge’ previously used to attach sporting ribbons to blazers by ardent Grammar girl supporters. Mrs Harvey-Short explains: ‘The first dress badge I saw was so delicate and the idea of hanging it off the bar badge of the House Captain seemed the perfect way to enhance this prestigious position. It was also an attempt to elegantly, but powerfully, symbolise school spirit and loyalty while capturing a look from the past.’ 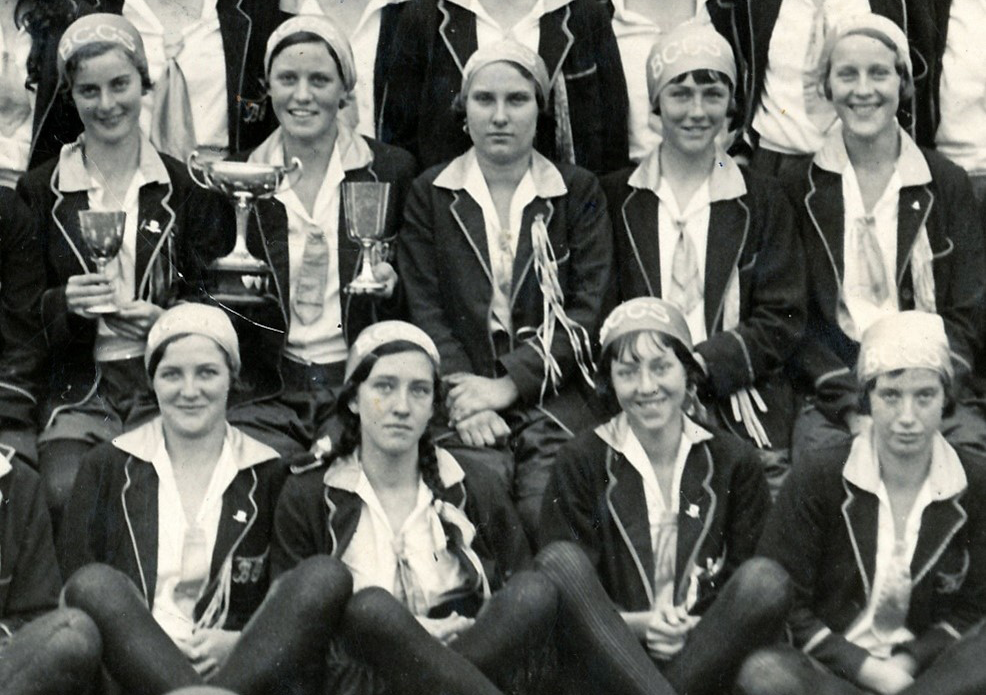 Each new student is allocated a House when she starts her time at Girls Grammar, often continuing on a family tradition. My younger sister, daughter, and niece all became England girls. My daughter proudly wore my House badge for five years. No matter the House, each girl embraces her ‘family’ and its colour—no matter what it is—and the House badge becomes a daily symbol of belonging, of being part of a family, and of being recognised by their special sisters.