Congratulations to the cast and crew of Abigail’s Coven! The season sold-out in record time, and audiences arrived in droves to traipse through ‘the labyrinth of (the) troubled mind’ of Abigail Williams, as she led her ‘coven’ of followers down a dark and unrelenting path.

I would like to detail a note of gratitude to everyone who was involved in making the 2022 Senior Drama Production a success. It was a mammoth team effort and was a remarkable way to punctuate the end of the effervescent Arts Fest. The entire season was impactful, although I must mention the Friday the 13th performance as an especially ominous occasion, complete with a visit from the playwright who had not seen a live version of the show since 1993. We were delighted to welcome Peter Cox to the Gehrmann Theatre, and he offered our cast a short Q&A following the show which was an incredible opportunity.

And to the students … their strong work ethic, remarkable skill, and their ability to show great sensitivity and flexibility around what was a tumultuously unpredictable rehearsal period was outstanding. The cast so enthusiastically offered their audience a sharp and hysteria-filled characterisation of the Puritan Salemites from the 1690s; those young characters who so blindly embarked upon a destructive path that changed their lives forever.

In my directorial interpretation of Abigail’s Coven—alongside my cast of 18 and my glorious lighting and sound designers—we aimed to explore the answers to many questions of morality. Could it be possible that Abigail’s actions haunted her through the rest of her living years? How does she recall those moments, and at what junctures does she sense overwhelming guilt? Could there possibly be room in her mind for atonement?

Thank you to the willing audience who ventured with us into this psychological space and experienced Abigail’s memories with sensitivity and deep reflection.

The Drama department appreciates your support of the Senior Drama Production, and we look forward to inviting you in August to see the Year 7 and 8 Drama Production of Charlotte’s Web, directed by Miss Sharni Folland. 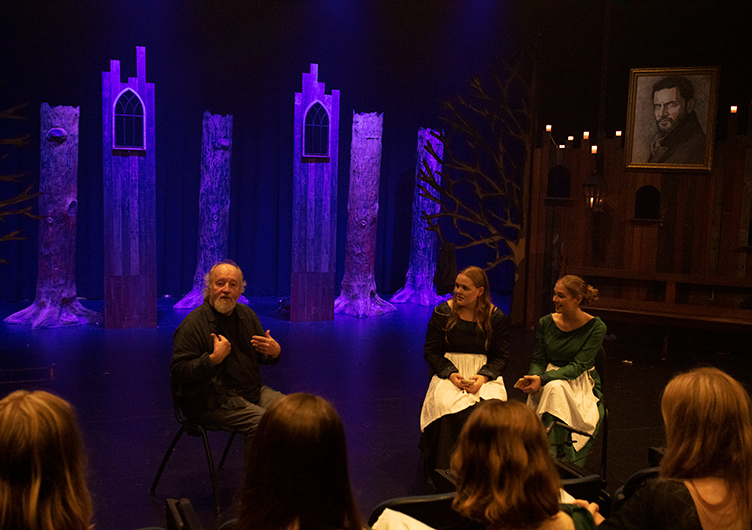 Co-writer of Abigail's Coven, Peter Cox, was welcomed on stage after Friday night's show for a Q&A