In June 1921, the School Magazine editor lamented that continuing customs and traditions at Girls Grammar were so important that, if the girls themselves did not maintain them, they would be lost. The writer was concerned about the annual planting of trees on ANZAC Day in an ANZAC Grove to honour the soldiers who fought and died in World War I.

Today, girls do not shirk their obligation to uphold the School’s traditions, and one contemporary and poignant reminder is present at Rangakarra. One hundred years after the magazine editor’s lament, there is, at the entrance to Rangakarra Recreational and Environmental Education Centre (Rangakarra), the BGGS ANZAC Grove, planted by students past and present.

Traditionally, wattle was planted as a powerful symbol of patriotism during the war years. Sprigs of wattle and colourful badges were sold on Wattle Day to raise money for the Red Cross. By the 1920s, ANZAC Day celebrations included planting wattle trees in the School’s ANZAC Grove to commemorate the soldiers who fought in World War I and remember alumnae who travelled far from home to care for them.

In the June 1920 School Magazine editorial, the Grove is mentioned along with Grammar women who attended the planting ceremony: Grace Wilson (1898); Jessie Andrews (1899); and Eunice Paten (1898). Matron Wilson joined the Australian Imperial Force (AIF) in 1915 and departed on the SS Mooltan for Lemnos, where she was appointed Principal Matron of the 3rd Australian General Hospital. She went on to nurse at Abassia (Cairo), London, and the Somme in France. Jessie Andrews joined the AIF on 11 November 1914 and nursed in England and France while Eunice Paten joined the AIF on 21 September 1914 and served in Egypt, England, and France. Their names are inscribed on the Old Girls War Memorial Honour Board along with the names of 11 other Grammar women in the Annie Mackay Room.

In 2013, following the purchase of the Fig Tree Pocket grounds, Girls Grammar began to plant hundreds of trees at Rangakarra. In 2015, at the official opening of Rangakarra, the ANZAC Grove, which had originated on the Main Campus was reinstated. Naturally, the grove would include wattles. To accompany those trees, the School purchased a very special Lone Pine seedling from the Australian War Memorial nursery to commemorate the Battle of Lone Pine, one of the most famous assaults by the ANZACs during the Gallipoli campaign. 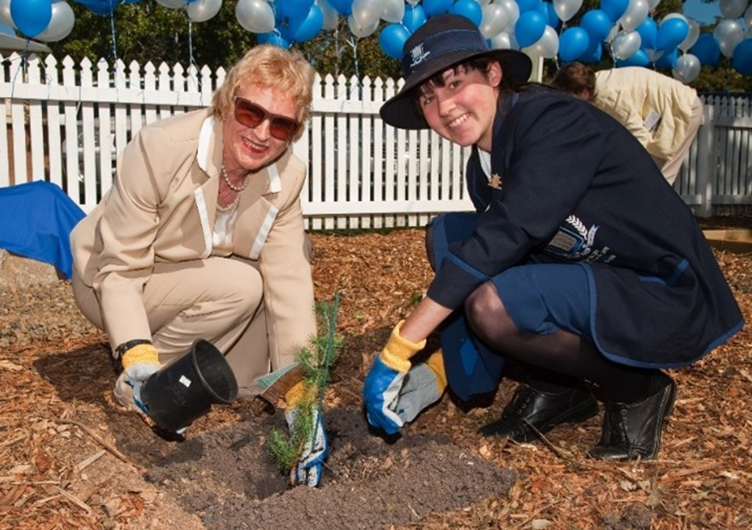 23 May 2015—Rangakarra Open Day and the planting of the Lone Pine by then President of the OGA, Mrs Janine Schmidt (Hogg, 1964), and Head Girl, Natalia Gulbransen-Diaz (2015)

The Lone Pine is a special tree in a beautiful setting, and carries with it tradition, history, and a celebration of sacrifice and service.

How pleased would the 1921 School Magazine editor be to see the Rangakarra ANZAC Grove? Writing as she did, so close to the end of World War I when memories were so raw, her wish has been realised. This tradition has escaped from the archive and thrives, as actual trees but, more importantly, as an idea in the minds of the Grammar girls who understand the meaning of this special tree.

2021—The ANZAC Grove viewed through the OGA gates