Brisbane Girls Grammar School was established on 15 March 1875, opening in a two-storey house on George Street with approximately 50 pupils under the direction of Lady Principal, Mrs Janet O’Connor.

Within six months, the School relocated to Wickham Terrace, before moving to its current premises on Gregory Terrace in 1884. For many years, the School did not celebrate Foundation Day, instead, joining the boys’ school to celebrate their Foundation Day on 28th February.

It was not until 15 March 1994—25 years ago—that Girls Grammar commenced celebrating Foundation Day.

We honour the past
The mothers of old,
Their fight for the right
To live freely.
We straighten the path for daughters to come
By claiming all rights to
Equality.
You are my sister source of my strength:
We’re women we’re strong
And we’re free
Throughout all my life I will stand by you
And you will stand by me.

This year, Actress and Grammar Woman, Ms Angie Milliken (Head Girl 1981) reflected on her time at the School at the annual Foundation Day Assembly on Wednesday 13 March. Ms Milliken spoke of her career in theatre, television and film, and the significance of Girls Grammar on her personal and professional development.

The following is a transcript of the address delivered by Angie Milliken (Head Girl 1981) at the Foundation Day Assembly.

Thank you Ms Euler, and thank you to everyone for the opportunity to be here.

I’m sure I won’t be the first past student and Foundation Day speaker to stand before you and be moved and excited to see the talent, raw potential and energy that as students are particularly yours.

And of course you are supported and held within a rich and fertile structure provided by tireless and dedicated teachers, administrators, parents and donors.

I’d like to take this moment to acknowledge the sheer excellence, beauty and highly distinguished school life you are creating here, and congratulate you all on the diverse and dynamic learning you are engaged in and spring-boarding into the world with.

It’s a miracle to witness and I’m proud to have been a part of it, to have benefited from it in the past and to be a part of this extraordinary community now. I feel especially privileged to be here today and to help celebrate the exceptional school that Girls Grammar was and is.

Girls Grammar has inspired my career as an actor from the very beginning and I’d like to share with you how it has continued to play a part in my professional contribution and personal development. The gift that keeps on giving so to speak.

The vast blank canvas of our future is always waiting to be drawn on, a concept that to me has always been completely exciting and also somewhat daunting. It can be anxious making for ourselves and our families—to think we might make a wrong step, take a wrong turn, or that making a wrong choice now might narrow our future then.

If I could say anything from experience—it is that with a perspective of curiosity and belief, there are no wrong turns, and there is also no perfect path. There is only learning and growth, and the stepping stones to the path we want, and the expansion of life as a consequence. As many have said, the pathway to success is no straight line.

Having spent 30 years in the entertainment world, with 13 of them in the US, I’ve been through a lifetime of experiences, of successes and failures, challenges and opportunities, heartbreaks and joy, comedy and drama, setbacks and peak milestones. I’ve won awards, and worked in far-flung places, there’s been romance and heartache, and some wonderful collaborations along the way.

I’ve met the rich and famous, and the hardworking and humble. I’m grateful for each experience, as each one has been a teacher and has led to something else. It’s taken grit and determination. As a point of survival, I’ve learned the lessons of staying curious, grateful and committed to learning, and finding open doors where others have slammed shut. I’ve learned to be un-swayed through the hard times, and to celebrate the great. These are the keys to what I now know of as resilience, resourcefulness, grace and dignity.

None of this tapestry of a life would have been possible without the opportunities for growth and learning I found at Girls Grammar. While they are in no way separate, there have been some specific interloping phases.

In Year 8 in 1977, I arrived at Girls Grammar—naive, shy and with a gift for running. I had already competed for Queensland and at the Pan Pacific Games. Girls Grammar provided the training and arena for me to excel each year in that field, to run in the QGSSSA Athletics and to grow with my teammates through Year 12.

Running demanded me to show up and be visible. It demanded me to compete hard, and it showed me what was possible when you combine time, effort and persistence. Each time I ran, a little more of myself was extended and that muscle called resilience was grown. I’m indebted to Mrs Pauline Harvey-Short for her support and inspiration.

Apart from on the running track I wasn’t quite sure where it was I belonged. I played netball, tried debating, toastmasters, outdoor education, I was a member of the orchestra and did orienteering.

I had also arrived at Girls Grammar with a whisper in my mind that kept calling in the realm of ‘acting and drama’ (or ‘speech and drama’, as it was called back then). I had no reference for that world at the time—I had only seen a few plays in my life, and movies on TV.

Girls Grammar provided the place for that whisper to become voiced, and over the years through productions and two musicals, the learning and foundation for my career was founded. Again inspiration shone in the form of the School’s wonderful Drama Teacher, Ms Anne-Marie O’Sullivan who made the world of acting and the theatre real for me. She was a shining example of what all of the teachers here do. She illuminated what was possible and then created a bridge for me to get there. I am forever in her debt.

Clearly, not every girl who studies Drama at Girls Grammar becomes an actor. So far, I only know of me, the wonderful Anna McGahan and Lucy Fry.

Far from being a marginal subject—I learned about courageous characters in history, the power of story and compassion for other people’s lives, I learned about flawed human beings and their efforts to become whole. I learned to look into the window of human experience and hold up a mirror for others to see.

I later learned that the art of theatre heals, gives insight into humanity and can potentially change lives, and as such I could use my craft to the benefit of others. In Girls Grammar Drama I found my home. These were not just drama lessons, but life lessons.

When on that fateful day in 1979 the mini-bus overturned and rolled down the slope near Christmas Creek, something unimaginable and life-changing happened to our year and our School. We suddenly learned the nature of tragedy, grief and loss. A sharp life lesson with lasting effects.

We became profoundly bonded by it and still are. It was an unexpected and undeniable lesson in resilience. A foundation layer for all of us and who we were to become. Those years after were hard, and also were tinged with the foundation of wisdom.

This year we’ll be commemorating the 40th anniversary of that event and it will be gratifying to honour those who passed and those who survived. We will again lay it to rest in the arms of the School, quietly and gratefully.

The greatest personal learning was yet to come in the form of my fourth phase, as Head Girl. When I was appointed to be one of the Head Girls of 1981, I was honoured, and I also stumbled. I was afraid. How could I possibly live up to that? How could I fulfill expectations and hope to succeed? Suddenly I was contributing to the life of the School in a way I never had before.

By the end of Year 12, Girls Grammar provided me the impetus and self-belief to apply for and complete a life-changing Rotary Youth Exchange Scholarship to Austria. I was hungry to experience the world. It gave me the foundation for further study at The University of Queensland (UQ), first in Social Work, then a Bachelor’s Degree in Sociology.

Still that quiet voice was calling me and while I had found another home at UQ Drama, I still hadn’t quite found the same courage to dive into a career in acting. It was with great trepidation that I auditioned for the National Institute of Dramatic Art in Sydney at the urging of my eldest sister, and after another three years of intensive study there, finally earned my first professional acting job at the age of 24. The path to my success was definitely not straight. Moving onwards, Girls Grammar gave me the foundation and resilience to create a 30-year career in theatre, television and film, to serve on the board of the Sydney Theatre Company, to live and work in the US and finally to come back to my roots.

The other night, 10 of my school friends all turned up to a performance of Death of a Salesman and came to the stage door after. I’ll never forget the sight of their faces and familiar selves. Our bond is not just strong—it’s alive and electric and full of the spirit of our earlier years.

When I see their shining faces full of who we were and of course who we are still becoming it’s moving and touching and exciting. As Julie Caton, President of the Old Girls Association said to me—Girls Grammar gave us the opportunity to be ourselves, to fail and improve and succeed. No matter what we’ve done we are deeply and forever connected. This community of Grammar women, this sorority of excellence, is indeed the Girls Grammar gift that keeps on giving.

In all of us, as I see in you, I see the essence of us as Grammar Girls—a quiet knowledge of who we are. I see independent women of substance and contribution. I see that resilience. I see forces to be reckoned with. I see egalitarianism and inclusivity. I see an unpretentiousness. I see grace, dignity and organising power. I see fierce love for each other and caring for our community. I see the best of humanity and the potential for more.

As I add to my career another phase called coaching, I can see that companies and corporations are crying out and paying for what performing artists can bring—humanity, relatability, communication and people skills. We lessen the role of the Arts in our lives at the peril of our culture and children. Every time I hear of STEM I imagine an A between the E and the M and look toward a future where there is equal status and integrated learning—and when we hear of STEAM. The arts and sciences cross over in more ways than we admit. In film, and at festivals and in books and in our thinking, being, and in the creating of our lives.

The world also needs exactly what Girls Grammar brings. The power of a sisterhood of women, who indeed bring their wisdom, imagination and integrity, their resilience and courage, contributing in all the areas we choose to work and live.

I celebrate Girls Grammar gratefully today and join you in your celebrations with all my heart. 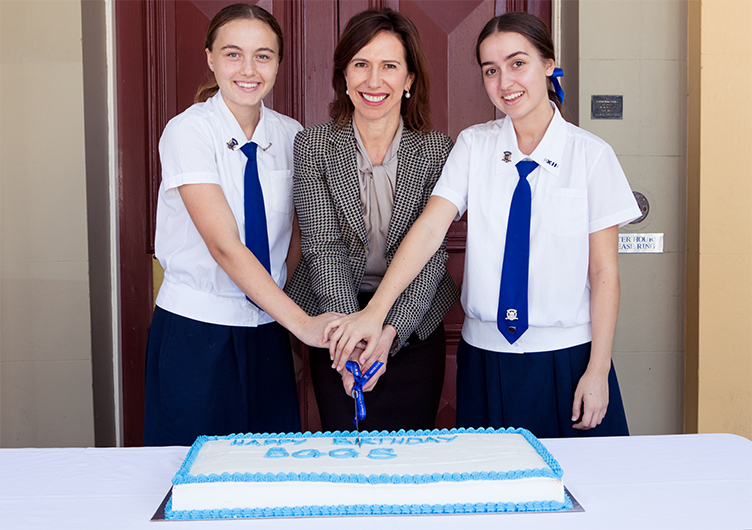