Stephanie Carter (2007) delivered the School’s annual Foundation Day address on Wednesday 10 March. A BGGS alumna and experienced communications professional in international development, Stephanie’s passion for service led her to tell the stories that aim to improve policies that affect those in need around the world.

The following is a transcript of the address delivered by Stephanie Carter (2007) at the Foundation Day Assembly.

In a week where we celebrate both Girls Grammar’s Foundation Day, and International Women’s Day, I’m delighted to be here with you all to help celebrate this extraordinary school, and reflect on the impact that a quality Girls Grammar education can have on young women both past and present.

My time at Girls Grammar was an important and transformative chapter that shaped both my mind and my values, and it is a privilege to share my experience with you today as Foundation Day speaker.

My story began 16 years ago, where I too sat in an assembly—albeit, a Grade 10 Year Assembly. Sitting with friends, I listened as our teachers introduced plans for the Grade 10 Community Service program. In addition to describing expectations, requirements and timelines, they also suggested a range of volunteering ideas, encouraging us to think carefully about how we might allocate our community service hours.

I didn’t know it at the time, but that day and that assembly was the moment I embarked on a journey that I am still on to this very day—forming the foundations of my professional career, and personal purpose.

After the assembly and later that evening, I recounted the events of the assembly to my Mum, and she made a suggestion.

‘Why don’t you come and help tutor some of the students in my class?’

At the time, Mum was a Grade 5 teacher at Moorooka Primary School, teaching a class that included newly arrived refugee students from Liberia, on Africa’s West Coast. Their mothers had come to Australia on Women at Risk Visas, with support from the Australian Red Cross, and the students were now finding their way in a mainstream Australian classroom.

The two weeks that I spent at Moorooka transformed what I thought I knew about the world, and I cannot put a price on what I learned during that time. Each day I sat with one of the students, always one of the girls—Hawa or Matu—and together we worked on basic literacy and numeracy.

It was difficult to fully grasp what the girls and their families had been through, having spent extended periods of time in refugee camps in Liberia and then Guinea, caught up in a devastating civil war. I also later learned that the Women at Risk program was aimed at women who no longer had male relatives, and were at risk of serious abuse because of their gender. Instead, as the days went by, I began to make sense of the girls’ hardship and resilience through shared stories, and when I completed my community service hours, we continued to trade letters back and forth.

I returned to school that next term hungry to learn more. I had a newfound sense of what justice and service looked like, but I wanted to better understand the depths of those complex social, political and economic forces that shape our world and the lives of so many—including the girls I had met at Moorooka. Indeed, these are issues that I continue to understand and unpack in my professional career today.

As a senior at Girls Grammar, I began spending more time volunteering with World Vision Australia, something that was wholly encouraged and supported by the school and my teachers, and in Grade 12 was both Community Service Captain, and a World Vision Youth Ambassador. As part of my Ambassador role, I travelled to Laos in the school holidays before Grade 12 began, and over two weeks, alongside five other Australian Ambassadors, met with families living in overwhelming poverty in both rural and urban communities. The stories of the women and children that I met moved, shocked and inspired me, and opened my eyes to a culture so different to my own. I also saw how the effects of malnutrition, lack of access to quality education, poor sanitation and healthcare can fall so heavily on women and their children, exacerbated by invisible biases and barriers to equality.

When I returned to Australia, I once again made sense of what I’d seen and experienced through story telling – this time sharing stories with others, and using my voice for a purpose. I travelled around Queensland with World Vision, speaking at their 40-Hour Famine Global Leadership Conventions, connecting with other young people, and sharing the stories of the women, children and families that I had met in Laos.

After graduation, I carried forward my passion for service into a bachelor’s degree at UQ, studying a mix of journalism, international relations and development studies. I also remained heavily involved with World Vision and their national youth movement ‘Vision Generation’ as both Queensland State Director and then National Operations Manager. When I wasn’t studying on campus, I was organising political forums, facilitating advocacy campaigns, engaging with the media, and trying to build and train a movement of like-minded youth advocates around the State.

My experience at UQ only further cemented my drive to build a career that would allow me to contribute meaningfully to global issues, and at the completion of my studies, I accepted a role with Palladium, a global development consultancy firm. For the past decade, I have worked in the international development sector across the Asia Pacific and African regions, managing strategic communications and public diplomacy on Australian Government funded aid programs, and across Palladium projects and people.

I am a communicator by trade—a professional story teller—and together with talented and dynamic teams, I help tell stories that raise awareness, that move people to action, that bring communities together, and that help lead to much needed policy change. For me, the most rewarding part of my career so far has been the opportunity to work and create impact with truly diverse teams, and the most resilient of women. Through my experiences living and working in Australia, South Africa, and more recently a three-year stint in Indonesia, I have learnt so much from talented colleagues in partner offices and countries around the world. It is also no coincidence that I have spent most of my career to date working on programs that improve the quality of, and access to, education, including for women and girls.

Of course, there have also been the challenges: navigating institutions and structures that benefit some and disregard others, balancing the politics of ‘giving back’ in a globalised world, and working on projects during two health pandemics—the Ebola crisis and COVID-19.

At Girls Grammar, I experienced first-hand what it means to take purposeful action for a more just world, and learnt that the journey to becoming a global citizen goes deeper than just textbooks and exams alone. Rich experiences like the service program have lasting effects on not just the students involved, but the wider community, and the Girls Grammar ethos of giving back and serving others permeates every aspect of life at school.

Global issues like the climate crisis, food security, access to clean water and sanitation, and violence against women are defining challenges of our generation, and solving these problems will be a team effort—teams that transcend cultures, borders, religions and world views, with team members who demonstrate empathy, integrity, respect for others, and tolerance, and who aren’t afraid to act with the courage of their convictions in pursuit of a greater purpose.

These qualities are the essence of what it means to be a Grammar Girl, and whether you know it now or not, the experiences that you gain here will shape you well after you walk out of the school gates for the very last time.

In the spirit of Foundation Day, let’s not forget that the foundation for the values we hold dear as Grammar Girls, the values I’ve mentioned today, was laid long ago. Our collective story, and the story of this incredible school, began when 40 female students and a female principal came together not far from here in a house on George Street, and pushed forward with their own vision for a more just world – a world where girls could be empowered, and educated.

Today, as on all days, we will—and we must—carry forward this legacy of service, and a sisterhood defined by purpose. 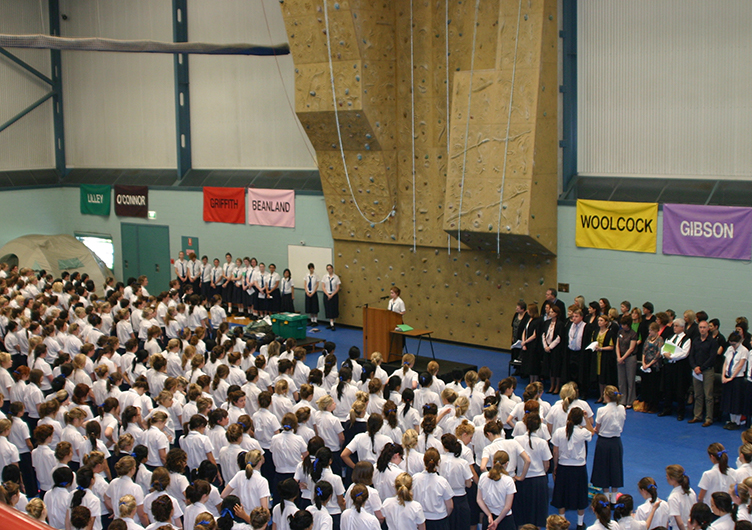 Stephanie Carter delivers a speech at Assembly in her role as Service Captain, 2007 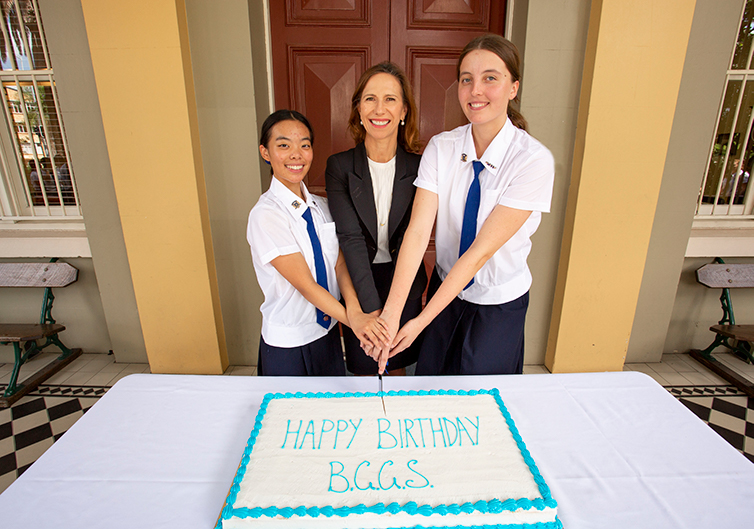 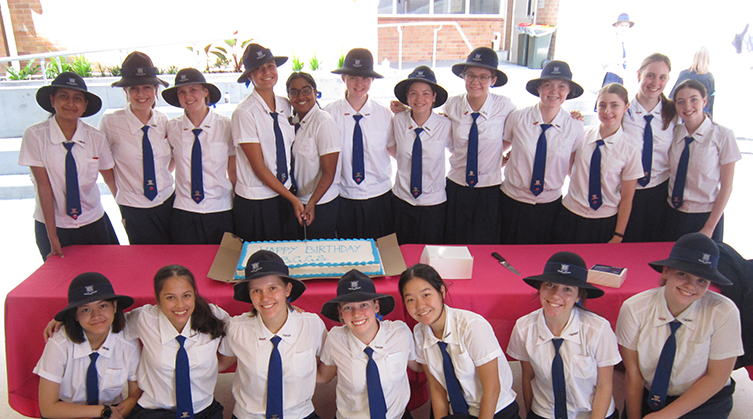