BGGS alumna, and Director-General of the Department of Agriculture and Fisheries, Dr Beth Woods (1972), spoke to students about the benefits gained by women when they are empowered to contribute.

The following is a transcript of the address delivered by Dr Woods at the Foundation Day Assembly.

Principal, Ms Jacinda Euler, members of the BGGS staff and student community, and other distinguished guests.

I will first acknowledge the traditional owners of the land on which we meet today and pay my respects to elders past, present and emerging. I acknowledge any elders who are with us today and the elders of any other communities who are present.

It is an honour to be with you today to celebrate Foundation Day.

What hopes and dreams for the School were on the minds of the founders of BGGS back in 1875?

The record tells us something of the vision of Sir Charles Lilley, former Premier and Chief Justice of Queensland, who led the move to establish a girls’ school:

‘we know that so far as any real knowledge is concerned, the great mass of women have been left in complete darkness … I propose, therefore, by this bill that the women of the colony should be able to take academic degrees …’

Sir Charles’ vision to establish a girls’ school was far ahead of its time. He fought for the foundation of Brisbane Girls Grammar School and on 15 March 1875, the School opened.

In 1875, there were 172 000 people in Queensland—105 000 men and 68 000 women. The people of the day were intent on building the facilities and the services of comparable cities, and perhaps for some, excellent schools were simply something that every city of note had to have. I have enjoyed a very happy and busy life and my life experience has led me to believe that the founders were doing more than that. In laying the foundations of educational opportunity I believe their intent was to build the expertise and capabilities available to their community by providing educational opportunity for both genders, and that establishing educational opportunity for women would play a special role in Queensland’s development.

Before I go too much further, I should give you a quick thumbnail history of what I have been doing since 1976 when I finished my Agricultural Science degree. I moved from science to economics and completed a Doctorate of Philosophy in Agricultural Economics at the University of Oxford, and worked for 12 years in regional Queensland as an Extension Agronomist helping farmers to grow crops more profitably and sustainably. Then I moved into management—managing a team of research and extension staff working on how to improve Queensland farming systems. I spent a couple of spells as an academic at The University of Queensland before going into senior management roles in science investment, and strategy and performance.

In my current role as Director-General of the Department of Agriculture and Fisheries (DAF) I work with other Directors-General across the Queensland government and in agricultural portfolios across the Australian, New Zealand and other state and territory governments. I advise and work with my portfolio ministers, and I lead a department with 2000 staff and 750 contractors across 96 sites. I’m also the Queensland Government Champion for the Northern Peninsula Area at the tip of Cape York Peninsula. I have a husband, two sons, two grandchildren, and have been on a range of boards in Australia and internationally.

In a recent week I discussed national agricultural biosecurity, bushfire and drought responses, and trade issues with Australian and New Zealand counterparts in Launceston; I participated in a regional community forum at Winton; then watched flying fish skip along beside the ferry across Torres Strait from Thursday Island to Bamaga where I celebrated the local people taking responsibility for their water supply and reticulation system. Then back in Brisbane, to discuss progress in improving the quality of the North Australian beef herd by using quantitative genetics, with departmental and university scientists, and what that would mean for the future of Spyglass, a major DAF facility just north-west of Charters Towers which is home to the key research breeding herd.

To say that I didn’t imagine when I left Girls Grammar in 1972 that at nearly 65, I would still be enjoying such a diverse set of activities is an understatement!

Let’s unpack some of the skills and capabilities involved. My school and university training gave me foundation history, science and numerical skills on which to build an understanding of biosecurity and trade matters. My postgraduate training provided the foundations for understanding disaster response policy and practice. Technology advances have provided the transport and communication connections that make a week like that possible.

My formal education helps me to frame the challenges of being an indigenous Australian living in a very remote part of our land, but after primary school I had little sustained interpersonal contact with indigenous people. So I have put focused effort into building relationships and learning from leaders in the North Peninsula Area.

As for quantitative genetics—well that relies on computational power and molecular biology that were not dreamt of when I was an undergraduate. My ability to make good decisions relies on the science foundations laid during school and on my ability to find cutting edge expertise and ask good questions.

Now think about how my life experience compared with that of my grandmother. She left school at the end of primary school and became a milliner but like the women of her day, stopped working outside the home when she married. She became a full time mother to her five daughters and carer of my great-grandmother.

Or my own mother, another Grammar girl. She left school at Junior (Year 10) following the death of her father and joined a bank prior to marrying and raising four children. She had always wanted to be ateacher, so when I was at Girls Grammar and the government put out a call for mature age women to train as teachers, she was very keen. My father was not in favour. He feared it would adversely affect the family and be too much for my mother. To maintain harmony she gave up her dream and instead, found purpose and meaning in community and volunteer causes.

By comparison my husband and my workplaces have mostly championed the idea that I would have a career, professional development and family responsibilities, and I am pleased to see my son and other fathers encouraged and enabled to enjoy all these activities.

So reflecting on the changes that have occurred since my grandmother’s day and since I left school, the role of women in your lifetimes will expand beyond what we can dream today. The School the founders established has supported women—including all of you—to set off well-equipped into their lives. Collectively and individually, you can live interesting and rewarding lives and help improve the quality of life for all Queenslanders. For everyone—female and male, education is a foundation for life.

Finally, I would like to highlight one particularly enjoyable and rewarding part of my life. By way of background—most countries transform from a society that is mostly rural and relies mostly on agriculture (think Queensland in 1875) to one which is a mix of urban and rural and offers a variety of employment and business opportunities. Development studies is the academic field which studies this process; development assistance is what we as a nation provide to support greater growth and opportunity for people in developing countries of our Asia-Pacific region. Australia has been a major contributor to the global effort of agriculture in development because we have relevant skills and expertise and a relatively recent history of modern nation building.

I have enjoyed many roles within the Australian Centre of International Agricultural Research which sits under the Australian Minister for Foreign Affairs. My DAF staff participate in many development projects, and I have chaired two international centres—the International Rice Research Institute in the Philippines and WorldFish in Penang.

This work has provided some wonderful opportunities to see life in other countries from a viewpoint that is not available to tourists but those are stories for another day. What I want to share with you today is an important, globally accepted insight—the best development investment you can make is in women’s education.

As women are educated birth rates drop; babies and toddlers are better fed and have improved lifelong health and development prospects as a result. Progress speeds up to offer more choice, more wealth, more work options, and healthier, higher quality lifestyles on average. Women who benefit from educational opportunities become champions of education for the next generation of girls, and the cycle of improvement continues (Sir Charles Lilley was on to something).

With colleagues, I have been hosted by the extended family of a village headman in Myanmar. The occasion was a celebration of their ability to fund their son completing primary school—the first in his village to have done so. His family believes this will change the future of all in his village and their focus now is on ensuring his sister has the same opportunity.

Thank you for inviting me to share some ideas with you. I hope I have reminded you that education is a foundation for opportunity and choice and convinced you to become and remain champions of good education for women. How you use your education is your choice, but I hope that you will find purpose and meaning in your life, and fulfil the founders’ hopes for the impact of the School they established so many years ago. 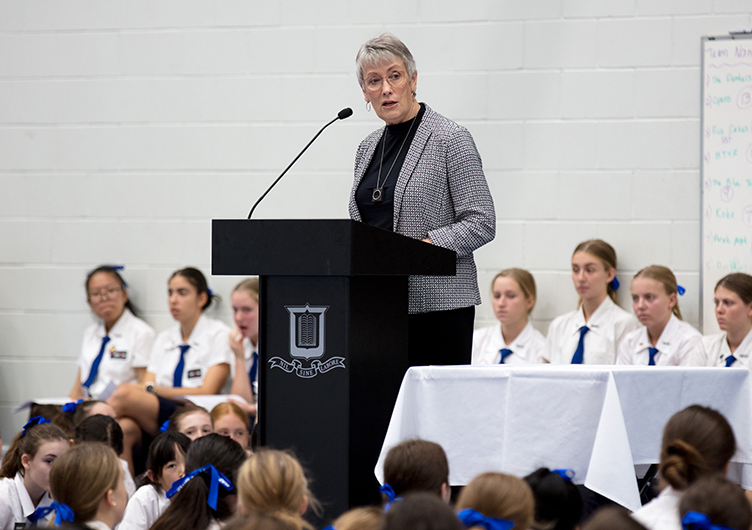 *Banner image: BGGS students arriving to the School in 1946