From the German classroom

It has been a busy term for all Year levels, but as always, we try to finish with a German tradition.

Year 7 girls have been learning all about school life in Germany, and to celebrate, our students made a school cone: ‘Schultüte’—a cone full of presents which is the most important part of every German child’s first day of school. Apparently, the thought of attending school every day for the next 12 to 13 years has to be ‘sweetened’ with candy and presents—a tradition that dates back to the early 19th century.

Year 8 students have been learning about the differences and similarities in living styles in Germany and Australia as well as exploring German food. As a tradition, we finished this term with a German platter and were wondering how many different types of German sausages we can taste … well, we tried at least three!

Year 9 girls also had a taste of a German delight—Berliner (jam donuts). According to popular legend, Berliner doughnuts were invented in 1756 by a Berlin confectioner who wanted to serve as a gunner under Frederick the Great and proved unfit for military service, but was allowed to stay with the regiment as a field baker. As a ‘thank you’, so to speak, he created the first ‘Berliner’. It is an old tradition, but very ‘lecker’. 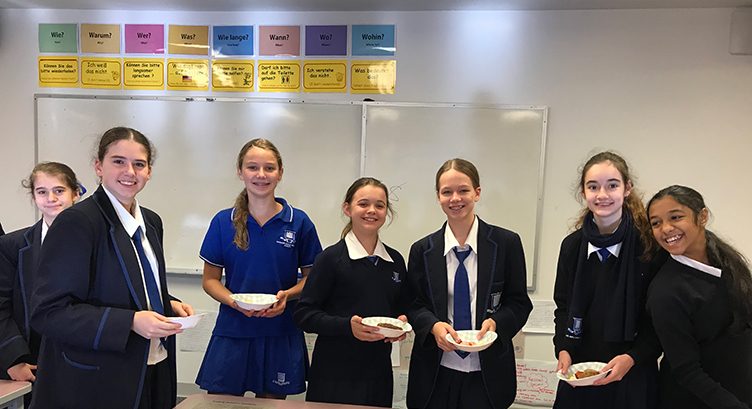