Sylvie King (2018) chose the path less travelled after graduating from Girls Grammar. She chose to study a Bachelor of Marine and Antarctic Science, majoring in Marine Biology and Marine and Antarctic Ecology, and minoring in Geographic Information Systems, at The University of Tasmania. At the beginning of her degree, Sylvie never imagined that she would be embarking on a two-month data-gathering expedition to Antarctica on board the RV Investigator.

What are you enjoying most about your course?
A lot of my units have multiple lecturers, and I really enjoy being able to meet all of these incredibly talented, interesting people who have such unique stories to tell—that and the field trips we get to go on!

How were you selected to join the RV Investigator and what motivated you to apply?
The opportunity was mentioned at the end of one of my lectures in semester two last year. My lecturer briefly described the voyage and said if anyone was interested to email her their CV. I almost didn’t apply—being a first-year student I had absolutely no expectation that I would even be allowed to be involved, but I figured it wouldn’t hurt to put my name out there in case they had any projects a little closer to home with which I could assist. At the end of the day, I had nothing to lose and knew I would always regret not putting my hand up.

You have referred to your voyage as being a ‘voyage of firsts’. Could you expand on this?
Yes, this voyage was obviously significant as it was my first but we also broke a number of records for the RV Investigator. These milestones included:

What did the voyage entail?
The aim of the voyage was to acquire geophysical data and samples to better understand the formation of the microcontinents that make up the Kerguelen Plateau. This data will now be used to submit a claim to the United Nations Convention of the Law of the Sea to extend Australia’s national jurisdiction to include Williams Ridge (the section of the plateau we surveyed).

This meant that we spent the nights dredging for rock samples and the days collecting seismic data (mapping the seafloor). Most of the science party had either 2 am to 2 pm (me) or 2 pm to 2 am shifts, which meant we all were able to experience both tasks. Being surrounded by such passionate, enthusiastic people and having the opportunity to work so closely with them definitely made the whole experience worthwhile.

How did the voyage expand your awareness of Antarctica?
Antarctica drives so many climate processes such as winds, tides and ocean circulation, all of which are vital to our, and the planet’s, survival. Going on the voyage solidified my personal connection with that part of the world and I came to understand how unique and precious the Antarctic and Sub-Antarctic is. It made me realise how important it is to foster this connection among the wider community to protect such a vulnerable continent.

What do you want to do after your study?
Funnily enough, instead of narrowing my options the voyage really opened my eyes to how many different career paths are out there in this field. While I’d still love to go into research, I’m now considering possible careers in outreach programs specifically designed to foster connections between people and Antarctica.

What advice would you give to Grammar girls or women about undertaking a challenge?
Honestly, I spent the lead up and a lot of the voyage absolutely terrified—I felt like I had no idea what I was doing or what I had gotten myself into, so this was definitely a challenging experience for me. I think the most important thing is to not let fear stop you from trying new things; embrace it, and the uncertainty, and use it to forge your own path. Have faith in yourself and your abilities. 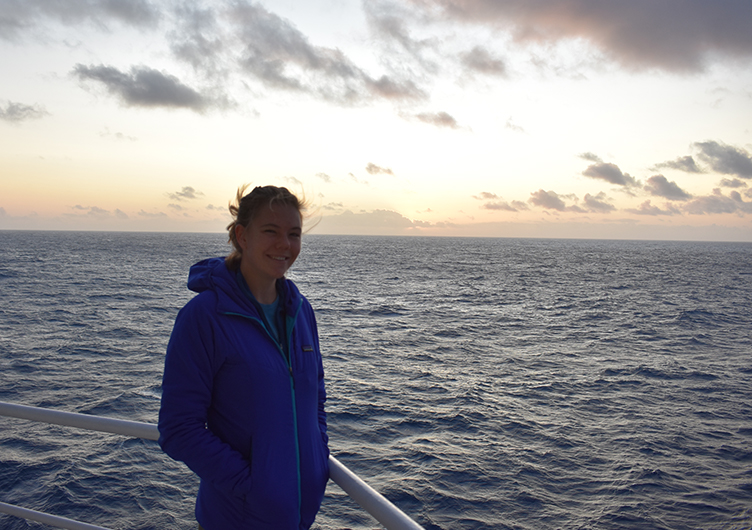