Many of our Objects of Substance have been ephemera lovingly kept by Old Girls or their families—and beautifully preserved by the Grammar Archive. These three postcard images have come to us from three separate sources: Gwendolyn Spurgin’s (1924) album; the Doris Kennedy (1916) Collection; and Elsie Watson’s (1945) niece-in-law. They capture a unique event—the first Speech Day held on the Girls Grammar Spring Hill campus. 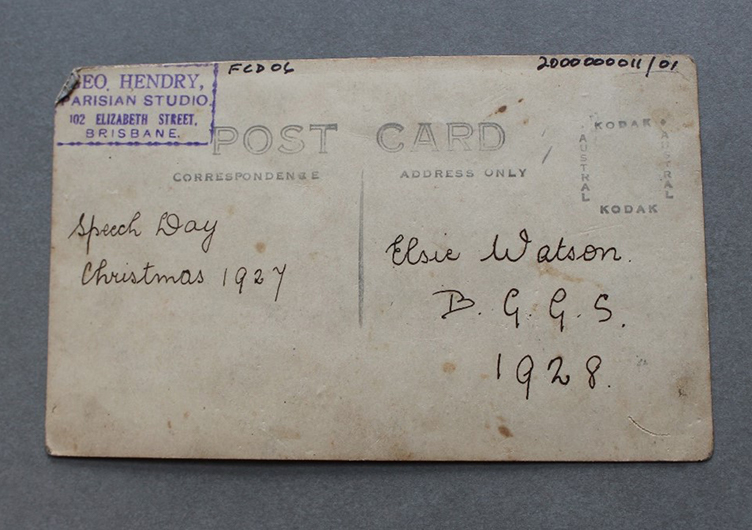 What can these frozen images tell us about the essence of Girls Grammar? Can an image ‘speak’? It most certainly can! In the words of Huggins and O’Mahony, ‘photographs can be potent, popular, and pervasive.’

Several images were taken by two Brisbane newspapers, The Brisbane Courier and The Telegraph, on Friday 9 December 1927, of what was obviously considered an important and newsworthy event. As was the habit in the 1920s, images were made into postcards. Several versions of the Girls Grammar Speech Day were produced, and we are fortunate enough to have two versions—a full panoramic view of the stage and a detail of a student receiving her prize from His Excellency, the Governor, Sir John Goodwin.

If we look closely, Elsie Watson’s postcard, the wide-angle version, tells us much about the day. Firstly, this Speech Day was held on Girls Grammar turf! Historically, this had not been the case. Since our establishment in 1875, Speech Day ceremonies were held at Brisbane Grammar School, in conjunction with the boys’ prize giving. Initially, prize giving was held twice a year, after mid-winter examinations in June and again in January or February post-mid-summer examinations. This changed in 1881, when Reginald Roe, then Headmaster of BGS, determined that the boys would appreciate receiving their prizes in a more timely manner and shifted prize giving to December. No doubt the girls agreed!

In August 1927, Miss Kathleen Lilley, at a meeting of the Trustees in Justice Woolcock’s rooms, requested that the girls’ Speech Day be held separately to the boys, ‘… because she had been obliged to ask all the girls except the prize winners to absent themselves for the past two years on account of want of space in the hall of the Boys’ School’. It was this desire to include the whole girls’ school which created this momentous change. This principle of inclusion of the whole-School community has remained the driving force for all subsequent Speech Days, creating the move from the School grounds in Spring Hill to the City Hall and onto the Brisbane Convention and Entertainment Centre with detours to BGS (1979), and Pat Rafter Arena, Tennyson (2014) in between.

Elsie Watson’s postcard also tells us who was attending and the pomp and ceremony that accompanied the event. Firstly, the official visitor was the Governor of Queensland, Sir John Goodwin, newly instated in June 1927, emphasising the importance of the School in Queensland education and society. 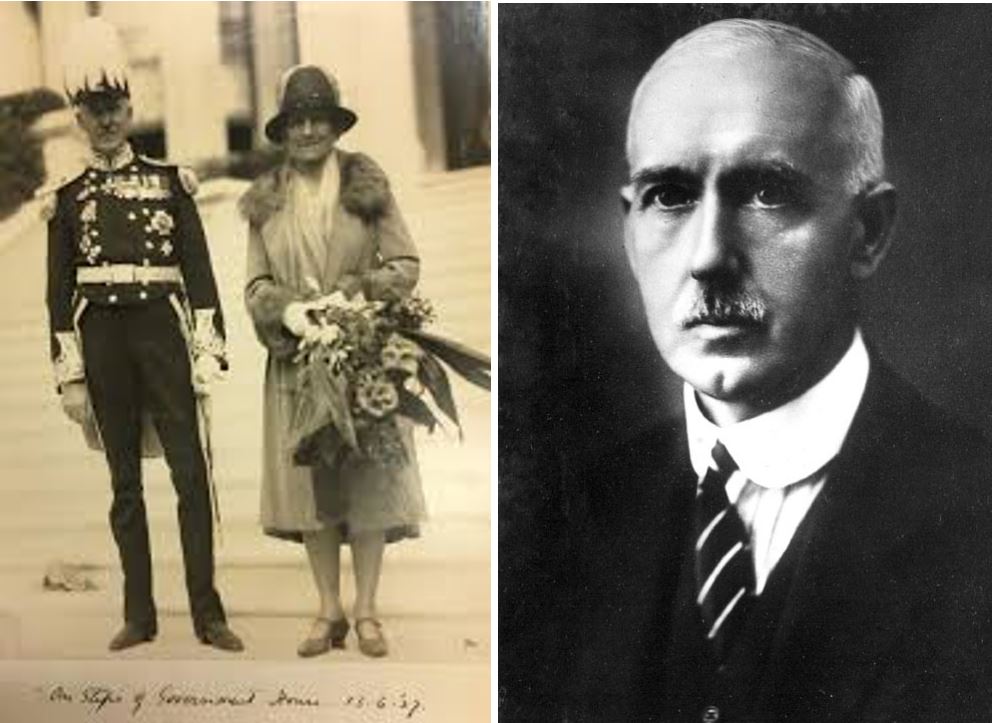 The stage was beautifully decorated with QGSSSA sporting pennants won by the School for sports such as Tennis, Swimming, and Basketball, various state and national flags, prize books, and trophies, and softened with potted plants and a backdrop of the old mango tree on the north-eastern corner of the School at the top end of the eastern Tennis court. Staff, in academic gowns, and other important guests, were seated at either end of the stage. However, the Trustees, the Headmistress, Miss Kathleen Mitford Lilley, and retiring Second Mistress, Miss Kathleen Grace Lyons, were on stage with the Governor. In this image, the Trustees can be individually identified, and it appears that JE Broadbent is either obscured or absent.

We possess one prize book (Charlotte Bronte’s Jane Eyre) from this prize giving, awarded to Mollie Westerman, Lower IIIE, as a Form prize, a particularly cherished reminder of this important event. 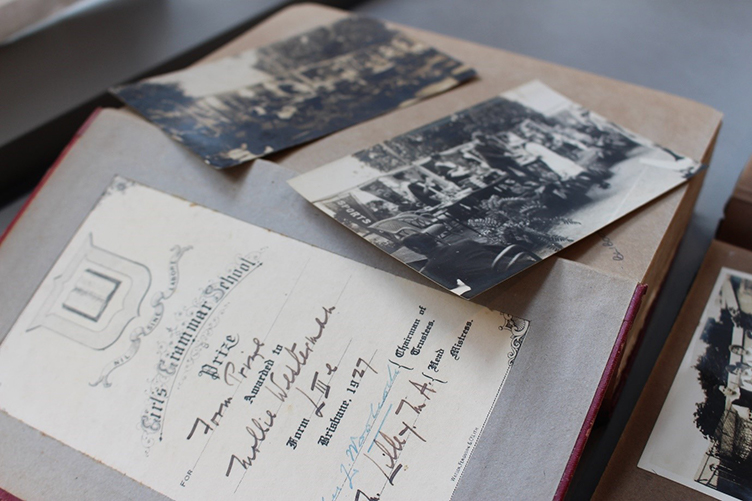 The second version of these valued postcards, from both the Doris Kennedy Collection and the Gwen Spurgin album, is a more detailed close-up featuring a prize winner in her white dress, hat, and gloves receiving her prize from His Excellency, the Governor, Sir John Goodwin. It is this image that both The Brisbane Courier and The Telegraph chose to publish. Once again, we can deduce much from the photograph: the procedure of the prizes; the Principal handing the prizes to the Governor; the Second Mistress organising the sequence of prizes; the guests and staff off stage; and the students lining up in anticipation of their prizes. This was obviously a very smoothly-run, and remarkably familiar, event. 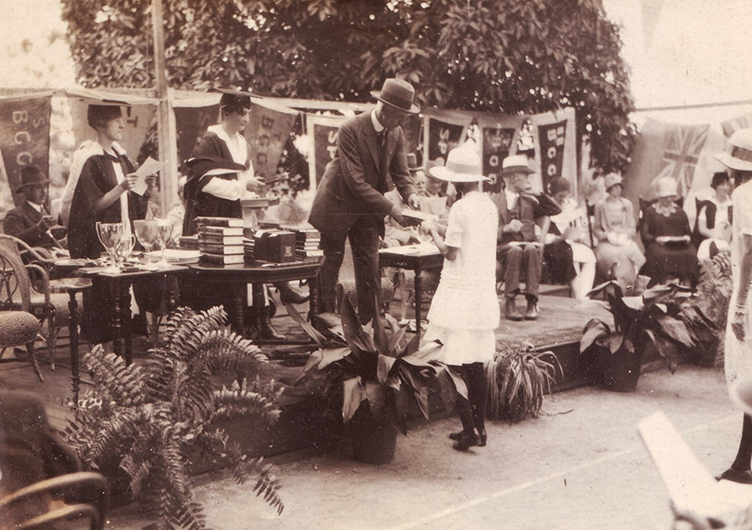 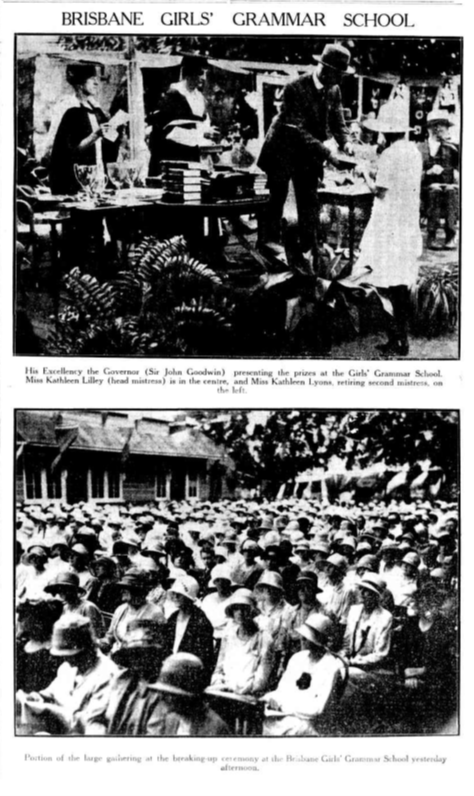 What are the subliminal messages carried in these images? Firstly, the postcards were sufficiently important to the students for them to collect and keep. Gwendolyn Spurgin (1924) and her sister, Gladys (1920), attended the School with Gladys returning in 1924 as a temporary Humanities teacher, to be made permanent in 1925 to 1929. Gwendolyn would have collected the postcard and included it in her precious album as Gladys was a teacher, no doubt, attending this significant event in the Girls Grammar calendar.

Doris Kennedy (1916), one of six sisters to attend BGGS between 1895 to 1916, returned as a Mathematics teacher in 1932 and managed to acquire this postcard, which was given to the School by her nephew, Ian Kennedy.

The Elsie Watson’s panoramic image of the 1927 Speech Day was given to the School by her family via her brother, Alan’s daughter, Jacqueline Byrne. The connection to the School remained strong with Elsie’s grandniece, Lucy Byrne, attending from 2000-2004.

These photographs also tell us of the importance of the event in the School calendar. As the first independent Speech Day held on Girls Grammar soil, it was significant and a clear acknowledgement of the efficacy of women’s education. Add the official visitor, His Excellency, the Governor and the Board of Trustees and the message of celebration of excellence, honouring hard work, and worthy achievements is clear. Even though the Board of Trustees was, in fact, the BGS Board, there was a belief by these men that the girls were due their own acknowledgement and celebration and it was important that all students should witness this celebration.

Having celebrated our 95th ‘stand alone’ Speech Day and Prize Giving this week, we should pause and remember Kathleen Lilley’s application to the Trustees seeking independence and recognition for the achievements of her students and of the thousands of Grammar girls who have crossed the stage or sat in the audience of this most significant celebration that our School holds dear.