I am oft-fascinated by how regularly a simple moment of practical generosity can have far-reaching effects. The most unassuming actions can, when fate intervenes, grow into long-lasting movements and organisations. It is via this very sense of providence that the BGGS Fathers Group found its genesis.

The idea of a group for Fathers of Grammar girls was borne in response to a simple need—the need for water polo nets for Grammar girls to train with in 1976.

Then, as now, many fathers do not merely want to ‘attend’ or ‘spectate’ their daughter/s’ participation in BGGS activities, but rather are motivated to stand alongside their daughters, feel like they also belong, and contribute. In 1976, BGGS fathers found that they not only enjoyed constructing water polo nets for the girls at Centenary Pool, they also enjoyed each other’s company while watching their daughters compete, and found great sense of purpose in fundraising for the sport.

By 1977, the fathers had raised $1200 to assist with sending seven BGGS girls, who had been selected in the Queensland U18 Water Polo team, to compete in New Zealand. Later that year, the fathers organised a BBQ break-up for the team and parents at the Centenary Pool. A BBQ tradition continues to this day, with the Fathers Group conducting our fundraising BBQ each year at the School’s Open Day.

By 1978, fathers who were not involved with the Water Polo Club also began asking ‘what else could be done to help the School and enjoy the camaraderie of other BGGS dads?’ This newly found and widespread interest inspired a delegation of dads to approach Mrs Hancock and propose an official BGGS Fathers Group. Mrs Hancock readily supported the notion, and the Fathers Group was born with its mission to ‘assist with school projects’.

At first, the Fathers Group focused their energies on the Spring Hill campus—for instance, constructing the covered walkways around the School. Fathers worked diligently to make improvements at the School until 1983, when the School purchased land just outside Imbil, which was to become Marrapatta Memorial Outdoor Education Centre.

From early in the piece, the Fathers Group supported the development of Marrapatta, contributing to the construction of the first two dormitory buildings. The second dormitory building is named after the Fathers Group’s longest serving president, Mr Peter Wilson, and wherever you go around the campus you will unwittingly encounter evidence of the BGGS fathers’ touch. From the Commemorative Tree Grove to the newly finished Nonagon shelter, the fathers’ influence is ever-present.

However, not everything that the fathers involved themselves with has been focused on Marrapatta.  For instance, from 1991 to ‘92 BGGS dads, led by President John Shenstone, constructed the white picket fence at the front of the School—a feature of the Gregory Terrace-facing aesthetic to this day.

Of course, it is not all grit and hard work. A rich culinary tradition within the Fathers Group has developed, and is now overseen by the Group Provedore, who crafts a multi-course feast for the fathers to enjoy at each working weekend.

The Fathers Group’s range of annual activities now include hosting Fathers Group dinners, working weekend retreats to Marrapatta, the Father and Daughter Dinner, cooking up a storm at the Fathers Group BBQ at Open Day, and providing representation at various bodies such as the Parents and Friends Association. The Fathers Group continues in its mission to ‘assist with school projects’ but far more importantly, it serves to connect fathers in a practical, participative and meaningful way to their daughters while at BGGS.

The Fathers Group with the newly constructed Nonagon shelter at Marrapatta 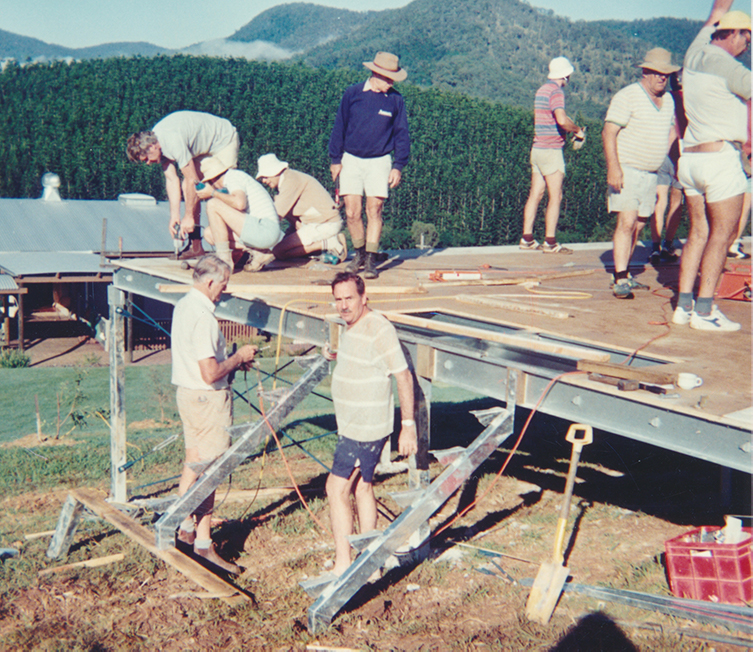 The Fathers Group at a Working Bee at Marrapatta in 1989