Remembrance is an important human emotion. For a short time, it diminishes our preoccupation with ‘self’ as we focus attention on the ‘other’. Traditionally on the 11th Day of the 11th month, nations around the world pause to remember the cessation of hostilities in a long-ago conflict—WW1 or the Great War—the war that was supposedly to end all wars. It was the first war based on mass industrial production. Crude machine guns, tanks, primitive aeroplanes and of course, the futility of trench warfare all combined to create the carnage and the barbarism associated with tactically conceived wholesale annihilation. It was an idiosyncratically European war. A fact that often ceases to amaze me is that the German Kaiser and the British King were both grandchildren of Queen Victoria—cousins were, in fact, fighting cousins. Madness!

The geo-political climate of Europe leading up to WW1 was fraught with tension. A series of treaties bound country to country often pitting neighbour against neighbour. Eventually, there would be a face-off. The climate was one of massive distrust. Once there is distrust at home, in friendship groups, with colleagues or nation states the unpredictable can happen. It often takes just one spark to ignite the tinderbox. This was the climate of 1914. The ‘spark’ proved to be the assassination of Archduke Franz Ferdinand, who was the nephew of the Austro-Hungarian Emperor. He was killed by an organisation called the Black Hand. Because they were a Serbian nationalist society, the Austro-Hungarian empire declared war on Serbia. A chain of events unfolded resulting in Russia, France, Germany, and Britain entering a state of war—herein lies the origins of World War 1. For Australia, if Britain was at war, we would also be at war; the colonial bonds were still very strong. Supporting King and mother country, in a European War, was comfortably part of the natural order. For Australia, the Great War gave us an instant military history but at unimaginable human cost.

By 1918, it looked like the hostilities might be heading for a stalemate. An Armistice, ceasefire, was declared for the 11th hour of the 11th month in 1918. No one won this conflict. It was a ceasefire. Some historians suggest that it might have ended this way due to the horrible contagion and illness associated with the Spanish Flu pandemic. This pandemic was shocking, taking the lives of millions of people worldwide. It was a pandemic on a scale much worse than COVID-19. Hostilities finally ceased—the Great War was over—time would tell that it was not the war to end all wars! Eventually, war memorials were built at home and abroad. Today travellers around Europe, especially those travelling within France and Belgium, will see fields of white crosses carefully and reverently maintained by the governments of the combatants of this long-ago conflict. These are the silent witnesses to the brutality and futility of this war.

The Great War has currency today; sure Remembrance Day is a tradition—remembrance is dismissed at our peril. The fact that we are here at Brisbane Girls Grammar School, Spring Hill, Queensland, Australia, sitting listening to early twentieth-century geo-political history, is a testament to the ongoing relevance of remembrance and tradition. Who cares, you might be saying? We need to care and solemnly remember, as all of this changed the course of our history. We must take note and learn from history—if we don’t, it will be at our peril.

Could the same conditions emerge today to cause another conflict? One would hope not, but human tribalism must be watched very carefully. Professor Hugh White, of the Australian Strategic Policy Institute, has warned that our 2021 geo-political climate could lead to heightened tensions on the scale of pre-WWI Europe. This is a big call and one that has not gone unchallenged. An expansionist China, one that is seeking what it might consider to be its ‘rightful’ place in the scheme of things, Russia’s reputed brazen international cyber terrorism, combined with a politically weakened United States, could lead to situations of heightened tension and distrust. In other places around the world, freedom too is being challenged. Afghanistan has just reverted to Taliban rule after years of Allied-American occupation. Complex geo-strategic unrest is certainly a characteristic of the 21st century.

One of the dangerous things about our current fixation with COVID, is that while there is such a pre-occupation of combatting this virus, ‘history’, for want of a better descriptor, hasn’t stopped. While we are too pre-occupied with our phones and the latest series on our Smart TVs—if you like the ‘banal’—developments could be brewing that challenge our notions of peace, order and civility. We must remain vigilant. We must take time to remember. We must think, challenge, and discern. We must expect much of our political representatives, and we must take time to become involved and interested ourselves—citizenship is both a right and a gift—it must be nurtured carefully and reverently. Last year 150 authors around the world, including JK Rowling, Salman Rushdie and Noam Chomsky, warned ‘that the free exchange of ideas, the lifeblood of a liberal society, is daily becoming more constricted’. This is very concerning.  You are so lucky to be learning at a School such as ours—a place that challenges you to think and to make your thinking visible. We want you to develop the skills of rigorous assessment and discernment—if you do this, your lives will be enriched by learning, and you in turn will enrich the lives of others. This is one of the ultimate gifts of education!

On this Remembrance Day 2021, let us remember the sacrifices of those brave souls who lost their lives for our freedoms. Let us remember the core of our freedoms. Let us remember that one of our duties, as citizens, is to be informed and to challenge. Let us not fall into the error of looking down when we should be looking up. As we pause in silence shortly, what will you hear? Let us always remember to take time to pause in silence to reflect, listen and discern. There is a ‘sound of silence’—it is the insight that often occurs when we silently sit and allow our thoughts to settle. Realisation and insight can and often does occur after periods of stillness. Our role is to actively reflect and interrogate. If we can do this, the sacrifice of all of those who lost their lives, not only in the Great War but all wars, hopefully will not have been in vain.

In the words of the Christian bible—particularly St John’s Gospel—words that are inscribed on twentieth-century war memorials around the world:

Greater love has no man than to lay down his life for a friend!

No greater love can there be than to lay down one’s life for a friend!

Let us remember and never forget! 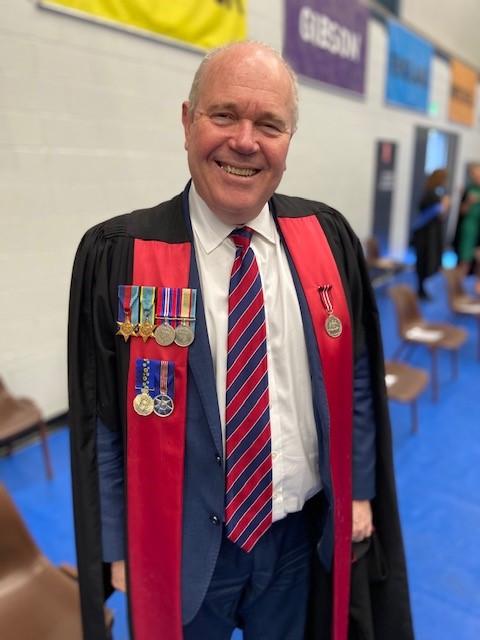