Shall We Dance? The Year 12 Annual Dance Card 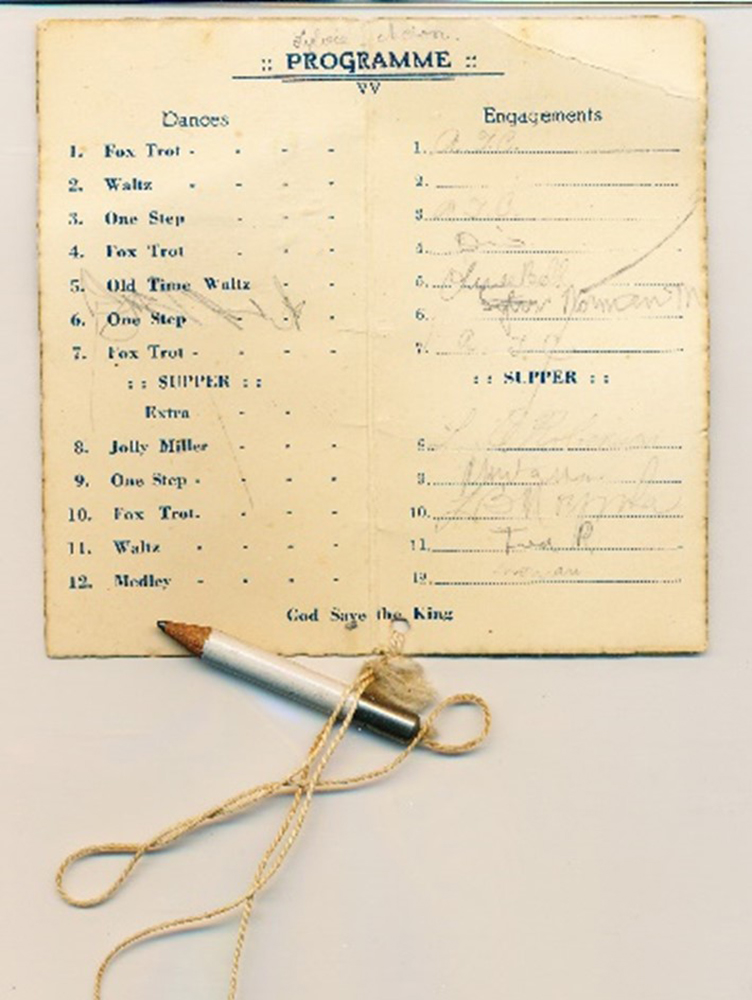 The School archive holds this delicate and elegant dance card, dated 17 August 1929. It only measures 5.5 cm x 11 cm, and it not only represents a time long gone, but also sets the stage for what was to come. What we now call the Formal—with its extravagant dresses, sophisticated venues, and chic decorations—had humble beginnings.

What would Sylvie Acton’s memories be of her 1929 Year 12 Annual Dance? Would it be the three dances promised to the mysterious A.T.C., the Old Time Waltz reserved for Oliver Bell, or the Assembly Hall decorated with greenery and lanterns? The Year 12 Annual Dance, or the Formal as it has been referred to since 1972, has always figured large in the hearts and minds of the graduating year.

One of our earliest references to the precursor of the Formal was an article in the Brisbane Courier dated 10 October 1908 where ‘Miss Wilkinson, Head Mistress of the Brisbane Girls Grammar School gave her pupils a most enjoyable dance last evening at the School’. Classrooms were converted into ballrooms lavishly decorated with ropes of flowers and greenery and handsome palms, with Rylatt’s Orchestra providing live music. 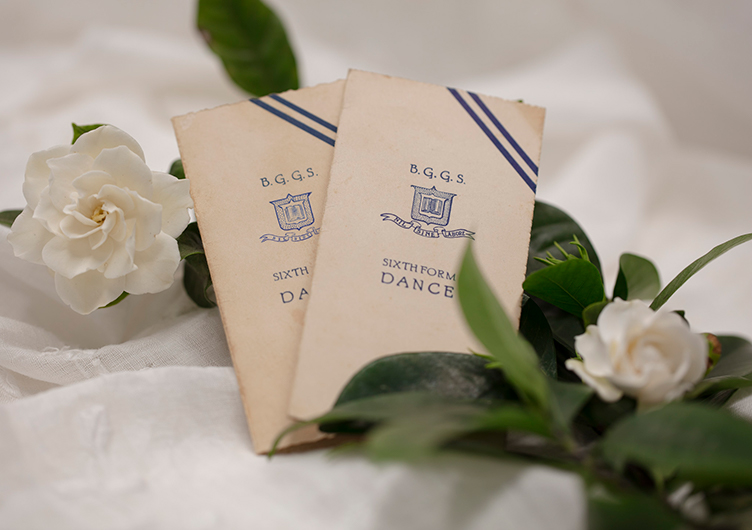 Over the years, there have been many common elements that highlight the Sixth Form Formal: a dance committee; venue decoration; invitations; School organisation and, importantly; ‘what are you wearing? Who are you taking?’ However, there have been deviations from the norm.

In 1953, a group of 10 girls, with the assistance of their parents, invited five couples each to the Sixth Form Dance. Pam Thomson (Napier, 1953) remembers: ‘… ten Sixth Formers of Brisbane Girls Grammar School who organised a private dance conducted in the O’Connor Boat House on North Quay. The Daisy McLean Band provided the music. The parents of the girls funded both the hire of the venue and the band. It was agreed that each girl invites 10 boys and girls who either attended, or had attended, GPS Schools. The parents were there to supervise the dance, as well as paying for the drinks. Alcohol was not allowed. The hostesses wore tiaras to honour the 1953 (our Senior year) … Coronation of Queen Elizabeth II.’ (Email 26.08.21) 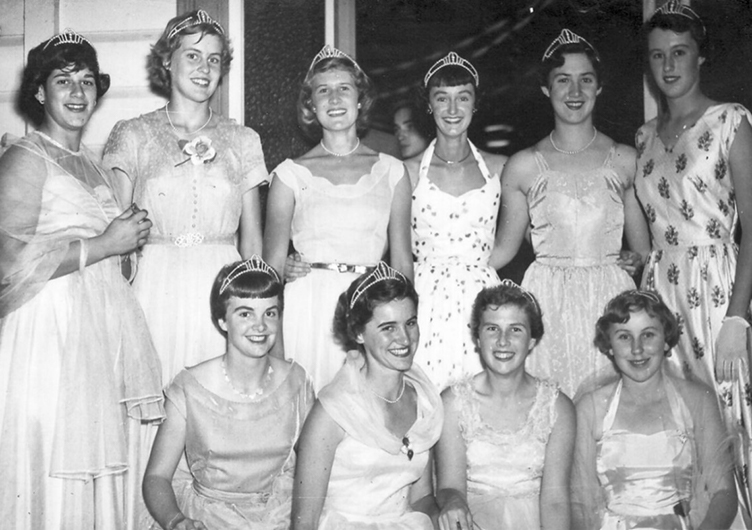 In 1972, the Formal moved off the Spring Hill campus, and has not returned since. Venues included many of Brisbane’s most popular entertainment spots such as Lennons, The Oasis, Wanganui Gardens, and 29 Murray Street.

It was at one of these venues where ‘conduct unbecoming’ occurred and resulted in the Principal, Mrs Judith Hancock, banning Formals and the ‘darkness’ descended from 1986 until 1995. This was not the first time this disciplinary action was taken as girls from 1964 recalled, ‘The dance was grudgingly organised by the School with deep misgivings. The legend was that at a previous dance, the punch was spiked, so all future dances until ours were cancelled.’ (1964 Reunion Recollections)

The triumphant return of the Formal came in 1996. Ms Antonia Swindells (Butnoris, 1996) remembers many lead-up assemblies devoted to discussions of acceptable behaviour, understanding that the event was a privilege, and that they were not to spoil it for future years.

The venue was the Brisbane Convention and Exhibition Centre, and, over the ensuing years, the Plaza Room was transformed into many exotic locations and themes. Kathryn Talbot (2008) remembers her formal, Masquerade … ‘the highlights were chunky, side fringes fierce, the rhinestones blinding, and the Formal may have created a national shortage in satin.’ (Email 7.09.21) 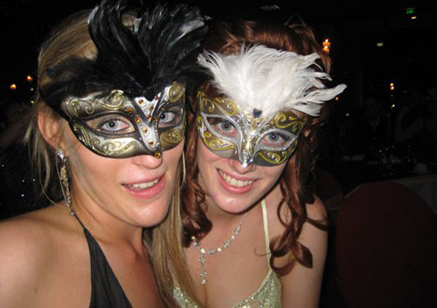 The Formal Committee ‘came home’ to Gregory Terrace in 2015 when they decided to host the Formal at the Royal International Convention Centre, or the renovated RNA. Once again, girls were transported through time to mystical places and elegant settings.

For more than 100 years, whether in taffeta or lace, silk or satin, bright red or deep purple, Grammar girls have primped, posed, pouted, and lost sleep over partners and parties for the School Formal. 2020 posed a new challenge: COVID-19 restrictions; lockdowns; quarantine; social distancing; and no dancing! Fortunately, the 2021 Winter Wonderland Formal sees the return of the dance floor. Perhaps, as a celebration and a nod to our history, it should also see the return of the dance card. 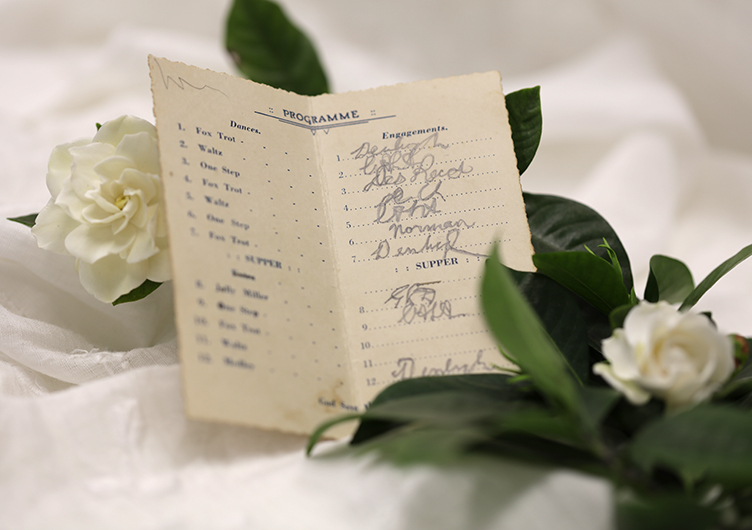