On Wednesday 20 February 2019, Girls Grammar celebrated Pink Stumps Day at Rangakarra Recreational and Environmental Education Centre. Raising awareness for the McGrath Foundation and the work they do in supporting women and men suffering from breast cancer, the girls donned pink ribbons, hats, scarves, socks and shoes. Supporters also embraced the pink theme, bringing their own colour and energy to the afternoon, with the Beanland Bear also making a surprise appearance. A wonderful afternoon tea was supplied by the Mothers Group and the canteen was staffed by the always generous members of the Girls Grammar community, without whom an event such as this would not be a success.

The crowd was treated to three exciting games of cricket. On the Daphne Welch Oval, the Girls Grammar Open team restricted Moreton Bay College to 0/61 from their 10 overs. The run chase began well with Alice Barker (9R) and Amreen Kahlon (8B) scoring freely, retiring on 18 and 12 runs respectively. After losing three quick wickets, the Grammar girls dug deep, and captains, Emily Bowden (12M) and Portia Ward (12W), combined to keep them in the game. After three overs of running between wickets, the girls required two runs to win off the final ball. Unfortunately, the team fell short finishing their innings on 3/60, in a thrilling finish worthy of the Women’s Big Bash League.

On the Lower Oval, the School’s 1B team fell short in an exciting game. Batting first, Girls Grammar reached 0/47. Katie Bowden (10M), Sophia Rothwell (10G) and Miranda Ward (10W) all made solid contributions. Tight bowling from Madeleine Biggs (7W) and Kajal Mistry (7O) made the chase difficult for Clayfield College, but they eventually got over the line, finishing on 2/49.

The Division 2 match between Girls Grammar’s 2A and 2C teams was played on the Northern Oval. Elise O’Kane (7H) starred with both bat and ball for the 2A team, scoring 27 runs, including a six, off 12 balls, as well as taking two wickets, helping her team reach 120 runs despite some tight bowling from 2C’s Amelia DeSouza (9R). The 2C girls finished with 98 runs.

Next Wednesday, the cricket season continues with the Open team travelling to St Margaret’s Anglican Girls School, 1A travelling to Nudgee to play Clayfield College, and the Division 2 teams playing at Kianawah Park. 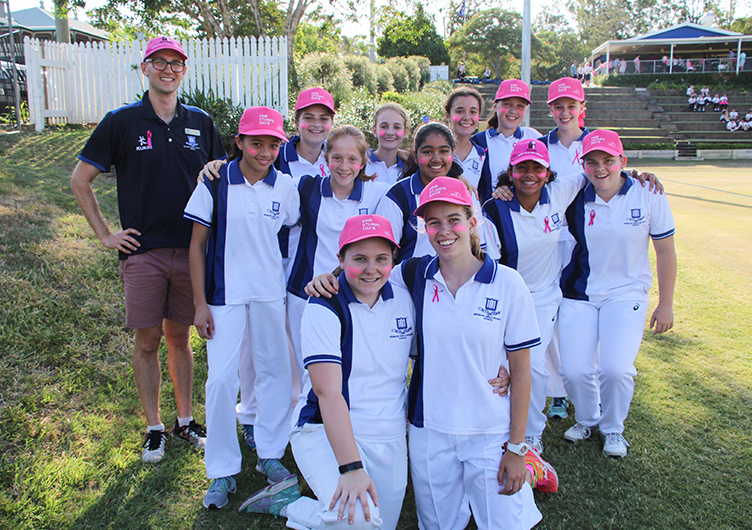