During the recent School holidays, I had the opportunity to travel to Germany for four weeks, courtesy of a scholarship awarded by the Goethe-Institut.

It was an amazing experience, which allowed me to represent Australia and develop international connections. I became friends with other award winners from Brazil, El Salvador, Germany, Iceland, India, Ireland and Kazakhstan. The Australian team, consisting of five people from places across the country, worked together to create presentations about our country, touching on ‘what is a typical Australian?’, Australian animals, popular sports and different foods.

The program was split into two sections. I spent the first two weeks on an exchange in the city of Velbert, where I attended school at Gesamtschule Velbert-Mitte and stayed with a host family, learning about daily life for a German school student. For the remaining two weeks we travelled around Germany, visiting Berlin, Bonn, Cologne and Munich. Some of my favourite activities included visiting the Cologne Cathedral, touring Parliament House in Berlin and climbing to the highest peak in Germany (Zugspitze), where we saw snow.

I thoroughly enjoyed being immersed in German culture and learning about the country’s history. Germany is a country with a fascinating history and we visited and experienced sites of immense tragedy as well as notable achievements. We visited one of the first concentration camps that the Nazis created in Dachau, the Hasenheide Stasi Prison, the Berlin Wall and the House of the History of the Federal Republic of Germany.

Throughout this trip, my German language was enriched as I spent the month talking with native speakers and others with a high level of German language skills. I thoroughly enjoyed the experience and would recommend that anyone who is studying German apply for this scholarship in the future. 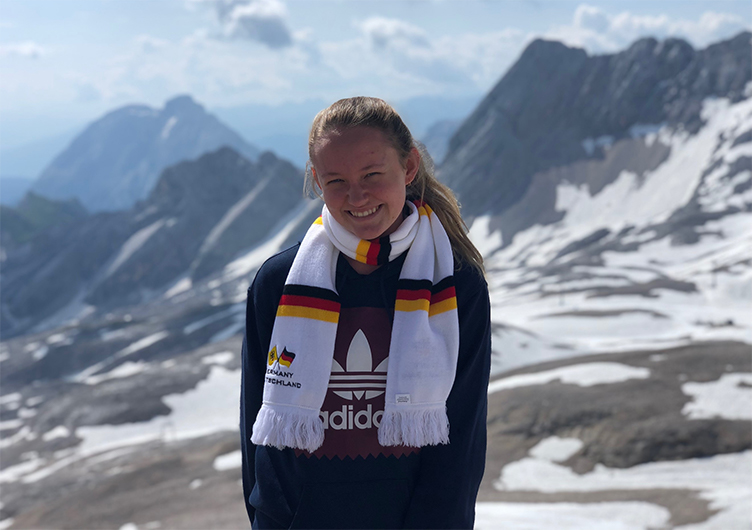 Nadia Robertson (11L) at the highest peak in Germany (Zugspitze).

From the International Studies Classroom

Living Languages: Know Others, Know Yourself